What is anaphora? Here’s a quick and simple definition:

Some additional key details about anaphora:

How to Pronounce Anaphora

Here's how to pronounce anaphora: uh-naf-er-uh

Anaphora can Include Variations

The repeated words that make anaphora can vary slightly in each instance and still count as anaphora. In fact, a writer can use such variations to amplify anaphora's effect. In his poem "London," William Blake makes use of anaphora with variation:

In every cry of every Man,
In every infant's cry of fear,
In every voice, in every ban,
The mind-forg'd manacles I hear

The variation from "every cry" to "every infant" sharpens Blake's claim. The next variation, located in the third line, shortens the phrase and repeats it twice, accelerating the poems rhythm and urgency. Taken as a whole, the variations of anaphora in the poem drive home Blake's message that no one in all of London is immune from the "mind-forg'd manacles" that imprison its inhabitants.

Among anaphora's closest relatives is epistrophe, which is identical to anaphora except that its the repetition of one or more words at the end of successive phrases, clauses, or sentences. The oath taken by courtroom witnesses (and oft-repeated on police procedurals) is a prime example of epistrophe:

Do you swear to tell the truth, the whole truth, and nothing but the truth?

Using both anaphora and epistrophe at once creates a third figure of speech called symploce. This proverb provides an example of symploce in action:

Anaphora appears frequently in literature, politics, and music. Below are a few famous examples of anaphora, which offer some insight into the way it works in various contexts.

Anaphora in the Bible

The Song of Songs, in the Old Testament of the Bible, contains many examples of anaphora. In this instance (from Chapter Four, Verses One and Two), there are two separate uses of anaphora: the first is the speaker's celebration of the beauty of his bride, and the second is a list of her admirable qualities.

Note that "like a flock" also repeats twice in this excerpt from the Song of Songs. While this is a kind of repetition, it's not anaphora because it doesn't come at the beginning of a sentence or phrase.

Anaphora in JD Salinger's The Catcher in the Rye

In this excerpt from Chapter 20 of The Catcher in the Rye, Salinger makes use of anaphora as Holden Caulfield recalls a miserable visit to his deceased brother's grave.

It rained on his lousy tombstone, and it rained on the grass on his stomach. It rained all over the place.

Here, Salinger's use of anaphora conveys both the relentlessness of the rain and Holden's obsessive focus on the painful memory of his brother's death.

Anaphora in Charles Dickens' A Tale of Two Cities

In the famous opening lines of A Tale of Two Cities, Dickens sets the scene by using anaphora to convey the chaotic turbulence of the French Revolution, whose violent divisions form the backdrop for his story. The anaphora creates a rhythmic anchor that forces Dickens's contradictory descriptions to remain connected.

Notice that Dickens also uses other types of repetition in addition to anaphora in this passage. For instance, in this line he combines anaphora and epistrophe to make symploce:

In part one of his poem "Howl," Allen Ginsberg offers many breathless lines connected through anaphora. In this excerpt, Ginsberg uses an extended metaphor to compare New York to a monster named Moloch, whose name is an allusion to a false god of the Old Testament. Moloch's name becomes an anaphora that is repeated multiple times within each line, as in the excerpt below:

The use of anaphora in this part of "Howl" creates a religious tone, as Ginsberg's repetitive verses rise to the cadence of a sermon. It also allows Ginsberg to tie together the various industrial images of the city together and connect them to his idea of Moloch, and in so doing condemn capitalist society for making what he sees as such anonymous, monstrous structures.

Anaphora in The Great Gatsby

In this short excerpt from The Great Gatsby, F. Scott Fitzgerald uses anaphora in a description of the apartment that Tom Buchanan keeps as a secret location for his extramarital affair. The anaphora emphasizes the smallness of this gaudy apartment, which also reflects the pettiness of the affair.

Anaphora is an important tool for speechwriters, because its repetition can set a tone, rally a crowd, and focus attention on the points that the speaker wants those listening to focus on. Anaphora has been used to powerful effect by some of the most influential public figures throughout history.

Anaphora in Winston Churchill's "We Shall Fight on the Beaches" (1940)

In this iconic speech from World War II, British Prime Minister Winston Churchill was tasked with delivering the dismal news that France's position in the war against Germany was weakening. He had to warn his nation that a German invasion of Britain might be on its way while also rallying British determination to continue the fight at all costs. Churchill uses anaphora in this section of the speech to create a rallying cry, forcefully emphasizing his nation's dogged persistence in every possible arena of the war.

This excerpt of Churchill's speech also shows how anaphora can help to give structure and therefore meaning and interest to a list. Without the "we shall fight" to link all of the things that Churchill is saying here, they might all come across as a muddle. But the repeated "we shall fight" focuses attention on each and every item in the list.

After the assassination of Martin Luther King Jr., presidential candidate Robert F. Kennedy made an impassioned, impromptu speech in which he announced the civil rights leader's death to a largely African-American crowd in Indianapolis, and made a plea for peace. Kennedy uses anaphora to focus on the tragedy of the day's events, while implicitly begging the question: what do we need as a nation to move forward? His anaphora sets up an antithesis between the dark present and a hopeful future offered later in the passage.

Songwriters also make frequent use of anaphora to create catchy, rhythmic lyrics that will remain lodged in the listener's memory, or to convey strong emotion.

Anaphora in "Every Breath You Take" by The Police

In their number-one-selling single of 1983, the Police make use of anaphora to help build a feel of claustrophobia within the song. Sting, the band's frontman and songwriter, has written that he intended the lyrics to capture the jealous, overbearing attitude of an obsessed ex-lover, or even the surveillance power of a Big Brother state like the one in George Orwell's 1984. In this context, the anaphora serves to emphasize the inescapability of the singer's stalker-like gaze.

Anaphora in "If I Had" by Eminem

In "If I Had," Eminem uses anaphora to align his list of complaints with the rhythm of the song, and to emphasize just how tired he is of feeling trapped in poverty.

I'm tired of jobs startin' off
at $5.50 an hour, then this boss wonders why I'm smartin' off
I'm tired of bein' fired every time I fart and cough
Tired of havin' to work as a gas station clerk
For this jerk, breathin' down my neck, drivin' me berserk
I'm tired of usin' plastic silverware
Tired of workin' at Builder's Square
Tired of not bein' a millionaire

Why Do Writers Use Anaphora?

On the simplest level, writers use anaphora to give a series of repeated words emphasis. More broadly, anaphora can produce a variety of stylistic effects. It can: 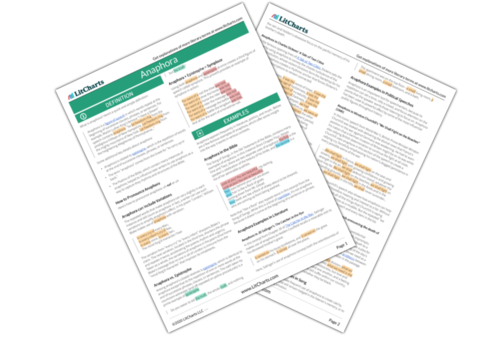