What is colloquialism? Here’s a quick and simple definition:

Colloquialism is the use of informal words or phrases in writing or speech. Colloquialisms are usually defined in geographical terms, meaning that they are often defined by their use within a dialect, a regionally-defined variant of a larger language. Colloquialisms can include aphorisms, idioms, profanity, or other words.

Some additional key details about colloquialism:

Here's how to pronounce colloquialism: kuh-loh-kwee-uh-liz-um

Though English speakers around the world can more or less understand each other, a person who grew up in the US will speak an English dialect with a different accent and use slightly different words than a person who grew up in the UK or a person who grew up in India. Further, different dialects can exist within a country as well as between countries. People from Louisiana in the United States often speak differently than, say, people from New York or Wisconsin.While dialects are most often geographically defined, some dialects can also be unique to a group of people who share a social class or ethnic background. For instance, cockney English is a term used to refer to the dialect of English traditionally spoken by working-class Londoners.

The term colloquialism refers specifically to the unique words that are specific to a particular dialect.

Colloquialisms function in one of two main ways:

The two types of colloquialism described above can include all sorts of different words or phrases, including unique contractions (ain't), profanity (bloody, which is a profanity in the UK but not the US), and idioms (It's raining monkeys, a variant of the idiom it's raining cats and dogs that's common in Louisiana). Colloquialisms can also be other types of words as well.

Colloquialism vs. Slang and Jargon

Colloquialism is related to (and easily confused with) slang and jargon.

While there's no disagreement that colloquialism, slang, and jargon are related terms, there is some debate about how they are related:

Even people who believe that jargon, slang, and colloquialism are distinct from one another tend to agree that jargon and slang terms can become colloquialisms when their use becomes widespread enough to include a significant number of people in a country or region.

Colloquialism in The Adventures of Huckleberry Finn by Mark Twain

In The Adventures of Huckleberry Finn, Mark Twain's narrator and title character, Huck Finn narrates his story using colloquial language that includes idioms and words specific to a regional dialect:

The Widow Douglas, she took me for her son, and allowed she would sivilize me; but it was rough living in the house all the time, considering how dismal regular and decent the widow was in all her ways; and so when I couldn’t stand it no longer, I lit out.

In The Adventures of Huckleberry Finn, Mark Twain uses colloquialism to give his characters a distinctive voice. Huck misspells civilize as "sivilize," which reveals his lack of formal education. Huck also uses "allowed" as a colloquialism for said, and he uses adjectives in an unusual and informal way in phrases like "it was rough living" and "dismal regular" (instead of "dismally regular," perhaps). The double negatives in "I couldn't stand it no longer" are an example of a regional dialect; in formal English, double negatives cancel each other out, but in casual speech, they can be used to add emphasis. When Huck says, "I lit out," he uses a colloquialism meaning "I left." All told, Huck's way of speaking helps to define his character and make him seem like a "real" person living in Missouri in the pre-Civil War time period in which the story is set.

Colloquialism in The Catcher in the Rye by J.D. Salinger

In The Catcher in the Rye, the novel's teenage narrator Holden Caulfield, says:

When I was all set to go, when I had my bags and all, I stood for a while next to the stairs and took a last look down the goddam corridor. I was sort of crying. I don't know why. I put my red hunting hat on, and turned the peak around to the back, the way I liked it, and then I yelled at the top of my goddam voice, "Sleep tight, ya morons!" I'll bet I woke up every bastard on the whole floor. Then I got the hell out.

In this passage, Holden describes how he ran away from his boarding school. Throughout the novel, Holden speaks in a distinctive and casual voice filled with colloquialisms, and in this passage, his colloquialisms convey his anger and desire to rebel against the "phonies" at his school. Holden swears a lot, and one of his favorite curse words throughout the novel is goddam, which is also an informal contraction. Salinger conveys Holden's emotional distress by telling us that Holden is "sort of crying." The phrase "Sleep tight, ya morons!" is colloquial in several senses: sleep tight is an idiom, ya is a colloquialism for you, and moron is debatably either a colloquialism or slang. Bastard is arguably yet another colloquialism, since its use here as a catch-all derogatory word is different from the word's literal meaning of a child born out of wedlock.

Colloquialism in A Visit From the Goon Squad by Jennifer Egan

In A Visit From the Goon Squad, washed-up, alcoholic rock star Bosco says:

"I want interviews, features, you name it," Bosco went on. "Fill up my life with that shit. Let's document every fucking humiliation. This is reality, right? You don't look good anymore twenty years later, especially when you've had half your guts removed. Time's a goon, right? Isn't that the expression?"

In this passage, Bosco unintentionally invents a new expression, "Time's a goon." Because this phrase is not a widely used expression, it isn't actually a colloquialism (though perhaps it might eventually grow into one if other people picked it up). Nonetheless, Bosco's speech is littered with actual colloquialisms, including profanity and his use of the word "guts" to describe his liver, that establish him as a character of his time and place.

Colloquialism in Othello by William Shakespeare

'Zounds, sir, you are one of those that will not
serve God, if the devil bid you

'Zounds sounds like a nonsense word to English speakers today, but it was a common colloquialism in Early Modern English, the dialect spoken in England during Shakespeare's lifetime. 'Zounds is an informal contraction of the phrase Christ's Wounds, and in Elizabethan England, it was considered a mild swear word. Here, Iago uses 'zounds to express a sense of frustration with Brabantio.

Colloquialism in "The Day Lady Died" by Frank O'Hara

Frank O'Hara's poetry is laced with slang and pop cultural references that may have been obscure to others even at the time he was writing, in the 1950s—but just because some of the words in this famous poem may be unclear to modern readers doesn't mean they're colloquialisms. "Quandariness," for example, is a word made up by the poet—not an example of colloquialism. The word "malted," however, is a colloquialism—an adjective used in the place of a noun, and a quick way to refer to a "malted milkshake." It was used only in the United States when O'Hara wrote the poem (and is barely in use any longer).

I walk up the muggy street beginning to sun
and have a hamburger and a malted and buy
an ugly NEW WORLD WRITING to see what the poets
in Ghana are doing these days
I go on to the bank
and Miss Stillwagon (first name Linda I once heard)
doesn’t even look up my balance for once in her life
and in the GOLDEN GRIFFIN I get a little Verlaine
for Patsy with drawings by Bonnard although I do
think of Hesiod, trans. Richmond Lattimore or
Brendan Behan’s new play or Le Balcon or Les Nègres
of Genet, but I don’t, I stick with Verlaine
after practically going to sleep with quandariness

Why Do Writers Use Colloquialism?

Because real people constantly use colloquialism in their every day speech, writers use colloquialism to create realistic voices for their characters, both in dialogue and first-person narration. Colloquialism can be an excellent tool for characterization because a person's use of colloquialisms and the dialect they speak can help denote the region or country they come from, their socio-economic or ethnic background, and even the period of time in which they live (the first scene of the play Pygmalion actually shows a scholar identify people's background from how they speak). In The Adventures of Huckleberry Finn, Mark Twain uses colloquialism to show that his narrator and main character, Huck Finn, comes from a specific region of the South (from Missouri, along the Missouri River) and lacks a formal education. Huck's colloquialisms are frank and vividly descriptive, which also gives a dynamic energy to his voice. To Twain's contemporaries, Huck would have sounded like a person from their own time; and to modern readers, Huck's colloquialisms help situate him in the nineteenth-century.

Writers also use colloquialism naturally—and even without expressly meaning to—for the simple reason that writers are living people who live in specific regions with specific dialects and so they often speak and think in colloquialisms. A writer's way of thinking and talking in casual conversation may drift unconsciously into their own writing—or they may be purposefully attempting to capture their way of speaking on the page. Bloggers and magazine writers, for example, often aim to write in a conversational tone that will make their articles engaging, humorous, unique, and easy to read. 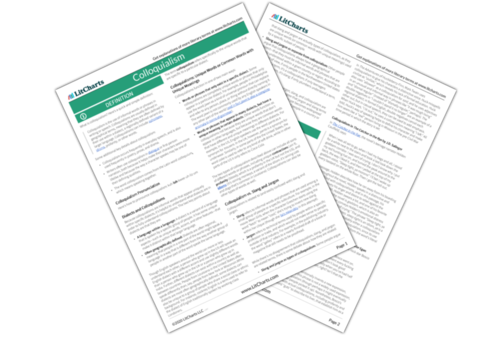