What is antanaclasis? Here’s a quick and simple definition:

Antanaclasis is a figure of speech in which a word or phrase is repeated within a sentence, but the word or phrase means something different each time it appears. A famous example of antanaclasis is Benjamin Franklin's statement that: "We must all hang together, or assuredly we shall all hang separately." In this example, the first time "hang" appears it means "stay" or "stand," while the second time it refers to being "hanged."

Some additional key details about antanaclasis:

Antanaclasis is a special form of pun. Puns are a broader category into which antanaclasis fits, for two reasons:

All this adds up to a simple fact: all examples of antanaclasis are puns, but not all puns are antanaclasis.

Antanaclasis can be found in everything from classical literature to contemporary pop culture, from Shakespearean plays to popular song lyrics to advertisements.

Examples of Antanaclasis in Shakespeare

Shakespeare was a great practitioner of antanaclasis. The device appears in a number of his plays, in moments both comic and tragic.

In Henry V, after England has invaded and defeated France in battle and the play is nearing its end, the comic and rather unscrupulous character of Pistol declares:

To England will I steal, and there I'll steal.

Here Pistol uses two meanings of the word "steal." In the first appearance, he uses the meaning "to sneak away." In the second, he uses the more common meaning of the act of theft.

In Twelfth Night, the character of Feste pulls a prank on another character named Malvolio. Feste's prank involves getting dressed up in the robes of a priest to trick Malvolio. As he goes off to do his mischief, Feste says:

Well, I’ll put it on, and I will dissemble myself in ’t, and I would I were the first that ever dissembled in such a gown.

The first "dissemble" here means to "disguise," while the second means to "lie" or to "act hypocritically." Note how, when the word is repeated, it has a slightly altered form (it's in the past tense rather than the present). That's okay; it still counts as antanaclasis.

Near the end of Othello, a candle burns in Desdemona's bedroom as Othello enters with the intent to kill her because he has been convinced that she has been unfaithful to him. He says:

In this example of antanaclasis, the first "light" refers to the candle, while the second refers to Desdemona's life. It's worth noting that this example of antanaclasis is a slightly less straightforward than most others. That's because in this example Othello uses a literal meaning for "light" in its first appearance, but he uses "light" figuratively in its second appearance. If you look up "light" in the dictionary, you won't find any definition according to which it means "life." Rather, Othello's use of "light" to mean "life" is metaphorical.

Examples of Antanaclasis in Song Lyrics

The witty repetition that takes place in antanaclasis can give power to a memorable chorus or refrain. Here are a couple of examples of antanaclasis in popular music.

Antanaclasis in "Where the Green Grass Grows" by Tim McGraw

In this song, Tim McGraw includes a lyric that uses "bars" to refer to a place where you buy a drink, and to protective rails that block access:

And there's bars on the corners and bars on my heart

Examples of Antanaclasis in Advertising

The pun in antanaclasis can produce pithy, witty statements that stick in the mind. It's no wonder, then, that brands often use antanaclasis for taglines. Here are some examples:

Why Do Writers Use Antanaclasis?

Writers use antanaclasis for a variety of reasons: 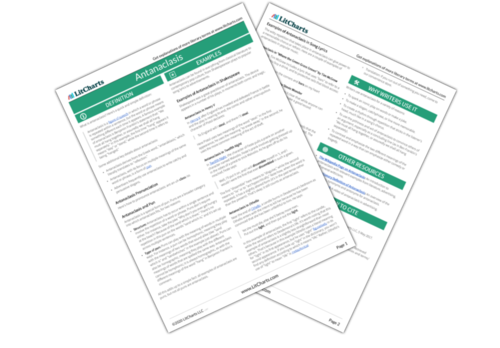