What is connotation? Here’s a quick and simple definition:

Connotation is the array of emotions and ideas suggested by a word in addition to its dictionary definition. Most words carry meanings, impressions, or associations apart from or beyond their literal meaning. For example, the words "child" and "kid" mean the same thing, but to call someone a "kid" has a slightly informal and therefore disrespectful connotation. The nature of connotations is that they are not explicitly defined, so they can be used in both purposeful and accidental ways to convey subtle meaning or subtext: you might call someone a "kid" on purpose to imply some disrespect, or you may do so without realizing the connotation of your words.

Some additional key details about connotation:

Here's how to pronounce connotation: kon-oh-tay-shun

Every word has a literal definition that you can look up in the dictionary, but most of the words people use on a daily basis carry associations that aren't written down as part of their strict definition. This "hidden" layer of meaning includes the array of emotions, cultural associations, and ideas that a given word invokes whenever it's used—all of which is determined by the history and context of the word's usage.

For example, the word "Hollywood" refers to a specific area in the city of Los Angeles, but the word is used so often as a metonym for the American film industry as a whole that it has come to evoke ideas of glamor, artifice, and fame. These associations are the connotations the word carries, and they're separate from the literal meaning of the word, which is known as its denotation.

Connotation is commonly defined in contrast to denotation, a literary term that refers to the "dictionary definition," or the explicit and literal definition of a word or phrase. The word "swan," for example, denotes a swan. But what "swan" connotes is grace, beauty, love, and purity.

The connotations a word carries may be different for different people, depending on a wide variety of factors, including their life experiences, where they live, and when. For instance, not everybody is aware that swans can actually be very aggressive, but for those who are, the word "swan" might actually have a connotation of violence, viciousness, and brutality.

Most words don't carry two such opposite connotations, but this example underscores that depending on where you are, what you know, and who you're speaking to, a certain word or phrase could have such different connotations that it could offend one person and delight another.

Connotations can be positive, negative, or neutral, depending on the associations evoked by a given word. When a writer is choosing the right words to express an idea, considering whether a given word has positive, negative, or neutral connotations is vital to getting across the right idea to a reader. There may be three words that all denote the same thing (i.e., the words are synonyms), but perhaps only one of them carries the correct connotation to accurately express a certain idea. For instance, imagine a writer choosing between the words "thin," "skinny," and "lithe" to describe a character. All are adjectives that denote slenderness, but each has a different connotation:

Depending on how the writer wants the reader to think of their character—underweight, attractive, or simply thin—a different word should be selected.

Connotation is in some ways similar to, and at times confused with, symbolism, a literary device in which one thing suggests or alludes to something else. Someone might mistakenly say, for instance, that a word connotes something that it actually symbolizes. So it's worthwhile to understand how these two devices overlap, and what makes them different from one another.

A famous example of a symbol in literature occurs inTo Kill a Mockingbird, when Atticus tells his children Jem and Scout that it's a sin to kill a mockingbird because mockingbirds cause no harm to anyone; they just sing. Because of these traits, mockingbirds in the novel symbolize innocence and beauty, while killing a mockingbird symbolizes an act of senseless cruelty. However, the word "mockingbird" doesn't actually carry a connotation of innocence or beauty.

Figurative language refers to any language that uses words or phrases that have meanings that are different from their literal interpretation. Metaphors, similes, and hyperboles are all examples of figurative language. The simile, "Mary's eyes are like the sea," for instance, is not trying to say that Mary's eyes are literally the same as a large body of salt-water. Instead, it is using the comparison to say something that is at once non-literal and more powerful about Mary's eyes: that they are deep, unknowable, powerful, can shift from calm to playfulness to rage.

Since connotation simply refers to the additional, sometimes hidden meaning of a word, examples of it are essentially infinite. The examples included here come from poetry, fiction, advertising, and painting to illustrate a few different ways connotation can be used to evoke specific ideas or emotions in the reader or viewer.

Example of Connotation in Poetry

In his poem "I Hear America Singing," Walt Whitman carefully chooses his words in order to imbue the poem with a sense of ruggedness and virility.

I hear America singing, the varied carols I hear,
Those of mechanics, each one singing his as it should be blithe and strong,
The carpenter singing his as he measures his plank or beam,
The mason singing his as he makes ready for work, or leaves off work,
...
Each singing what belongs to him or her and to none else,
The day what belongs to the day—at night the party of young fellows, robust, friendly,
Singing with open mouths their strong melodious songs.

The poem is brimming with words like "mechanic," "carpenter," and "mason," all of which describe traditional working-class American jobs that conjure up images of physical labor and hard work. Rather than speaking directly to his readers about the American common man, Whitman makes use of connotation to spin an image of the strength and rugged individualism of Americans. Just imagine if Whitman had instead chosen to describe the soft singing of whittlers and tinkers, or bankers and legal clerks—and the different connotations those occupations would have brought to the poem.

Example of Connotation in Fiction

George Orwell's novel Animal Farm is a dystopian retelling of the events surrounding the Russian revolution, and is commonly described as an allegory, or a highly symbolic narrative that conveys a hidden meaning. Orwell uses connotation to make his characters representative of figures and forces in real life. He casts pigs as the oppressive and dogmatic ruling class because the word "pig" carries a strong connotation of corruption and greed. The horse characters, such as Boxer, populate the laboring class of the farm, because "workhorses" are associated with strenuous physical labor.

Orwell went even further with connotation in Animal Farm, and considered connotation when naming his characters. A great example is Mr. Whymper: the untrustworthy and money-grubbing human the animals choose as their interpreter. Even if you haven't read Animal Farm, or don't know who Mr. Whymper is, his name has an immediately negative connotation, as it sounds similar to "whimper," a word that connotes weakness and cowardice. Choosing this word for his character cements the idea in readers' heads from the outset that Mr. Whymper should be treated with suspicion or disdain—and indeed, Mr. Whymper turns out to be a cowardly, two-faced character.

Example of Connotation in Advertising and Branding

Connotation is used in advertisements and branding to get emotional responses out of the consumer. Companies can take advantage of the array of associations people naturally make with a certain word or phrase and, if they are successful, sell consumers on an idea or a feeling rather than just a product.

If you take a look at the following list of cars from the 1960's, there's an obvious theme:

Each name has been chosen specifically for its connotation, and in every case the desired connotation is speed, wildness, and power. The car manufacturers of the Mustang, for example, chose a word that denotes wild horses and connotes beauty, freedom, and power.

Why Writers Use Connotation

Writers use connotation to transmit meaning without explicitly telling a reader what to think feel. When a writer chooses one word over another that means the same thing, they are giving preference to the set of associations carried by that word. These associations (thoughts, feelings, memories, words, images, or ideas) help to deepen and elaborate on the meaning of a word or phrase beyond its literal definition. Furthermore, writers may choose words for their positive, negative, or neutral connotations in order to evoke the right response in the reader. On a larger scale, writers might also choose to create or use particular characters, environments, images, and events in order to create specific associations in the reader's mind. In this way, connotations are used to indirectly influence the way people receive and process language on a daily basis. 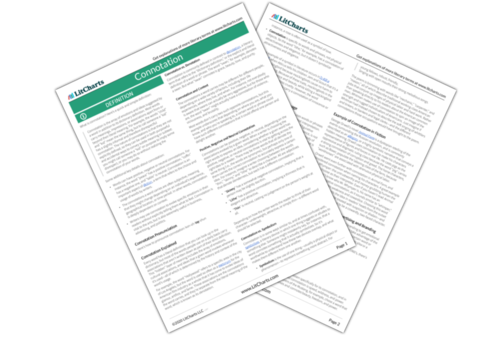