What is a motif? Here’s a quick and simple definition:

A motif is an element or idea that recurs throughout a work of literature. Motifs, which are often collections of related symbols, help develop the central themes of a book or play. For example, one of the central themes in Romeo and Juliet is that love is a paradox containing many contradictions. As part of developing this theme, Shakespeare describes the experience of love by pairing contradictory, opposite symbols next to each other throughout the play, such as night and day, moon and sun, crows and swans. All of these paired symbols fall into a broader pattern of "dark vs. light," and that broader pattern is called a motif. The motif (in this case "darkness and light") reinforces the theme: that love is paradox.

Some additional key details about motifs:

Here's how to pronounce motif: moh-teef

In order to understand motifs in more depth, it’s helpful to have a strong grasp of a few other literary terms related to motif. We cover each of these in depth on their own respective pages, but below is a quick overview to help make understanding motif easier.

The main themes of a work are rarely expressed directly by a writer (for instance, Shakespeare doesn't tell his audience directly "this play is about the contradictory nature of love"). Rather, writers reveal the main themes of their work indirectly, through different elements of the narrative such as plot developments and imagery. When readers recognize a pattern in the work they're reading—specifically, a pattern that connects some or all of the different images or plot developments that help express a particular theme in the work—that overall pattern is the motif. Here's a more concrete example:

This relationship between themes, motifs, and symbols (or images) can be visualized with different symbols making up a motif, and different motifs supporting an overarching theme, like so:

It can be difficult, at times, to clearly distinguish themes from the motifs that express them. Here are some of the key differences between themes and motifs:

To return to the Romeo and Juliet example, Shakespeare's theme (that "love is contradictory") is an abstract idea that finds expression in different ways throughout the story, and it's general enough that most people will be able to relate it to their own life and experiences. By contrast, the motif of darkness and light is not a purely abstract concept, and it's also not necessarily as broadly applicable to the lives of readers as a theme generally is.

There are two competing ways of thinking about the relationship between symbols and motifs:

In this entry, we've chosen to cover this second definition of motif—the one that separates motifs from symbols in the hierarchy of literary devices. However, many reputable sources refer to motif as a kind of symbol. What you should know is that there are competing definitions of motif, and whether a motif is a type of symbol depends on the definition you're using.

While motifs often do consist of literary symbols like the ones we describe above—the raven that stands for death, or the path that represents a way of life—the elements that make up motifs are not always things. In the examples below, you'll see cases in which the symbolic elements of a motif are sometimes things, sometimes actions, and sometimes events and places.

One theme of Roberto Bolaño's novel 2666 is that art always escapes critics' efforts to understand it. Bolaño explores this theme through the motif of the futile search. Throughout the novel, different characters search for things unsuccessfully:

Each of the novel's three searches proves to be fruitless, creating a broader pattern (the motif) of futile searching, which in turn supports the book's broader thematic statement that art, despite the best efforts of critics, has a way of resisting resolution or apprehension.

One theme in Fitzgerald's The Great Gatsby is that the American dream is empty and unattainable. The book centers around the character Jay Gatsby, who claws his way into high society to win the affection of the wealthy but frivolous Daisy Buchanan, and ultimately dies because of Daisy's selfish, reckless behavior. Fitzgerald uses the motif of the color green to explore the empty promise of the American Dream by repeatedly associating the color with ideas of success, ambition, and wealth:

In every instance in which the color green appears in the book, it is closely associated with a goal that is forever receding into the distance (whether it's the idea of a "New World," true love, success, or happiness). "Greenness" itself therefore becomes a motif which reinforces the broader theme of the unattainability of the American dream.

Chinua Achebe's Things Falls Apart is about an Igbo warrior named Okonkwo, whose commitment to his culture's traditions brings him honor, but also eventually leads to his downfall. In the novel, Achebe develops the theme that blindly following tradition can have catastrophic consequences through the specific motif of sacrifice.

Finally, Okonkwo loses the will to live and commits suicide, devastated by having witnessed the white colonialists' destruction of his own community's ancient traditions (including acts of sacrifice such as those described above). Okonkwo's inability to live without these traditions—all of which together make up the motif of sacrifice—supports the book's broader thematic statement: that without the ability to adapt and change, the desire to preserve tradition can become fatal.

Why Do Writers Use Motifs?

Writers incorporate motifs in their work for a number of reasons: 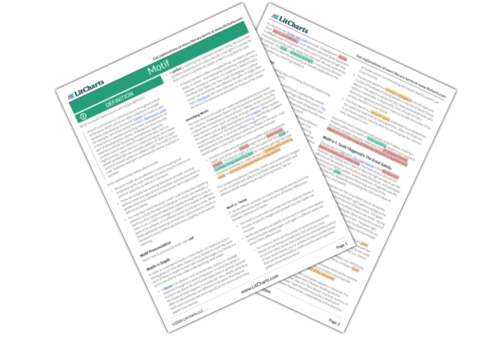