What is a stanza? Here’s a quick and simple definition:

A stanza is a group of lines form a smaller unit within a poem. A single stanza is usually set apart from other lines or stanza within a poem by a double line break or a change in indentation.

Some additional key details about stanzas:

How to Pronounce Stanza

Here's how to pronounce stanza: stan-zuh

Stanzas can have any meter or rhyme scheme, or none at all. However, that way that stanzas work are different in formal verse that has meter and rhyme scheme and free verse that does not.

In formal verse—that is, poetry with a strict meter and rhyme scheme—a stanza may contain multiple meters and different rhymes. For example, some stanzas alternate between iambic pentameter and iambic tetrameter. However, the general rule about stanzas in formal verse is that their form recurs from stanza to stanza—the words are different in each stanza, but the general metrical pattern and rhyme scheme are usually the same in each stanza.

Here's an example. In this two-stanza poem by Emily Dickinson, the first stanza alternates lines of iambic tetrameter (eight syllables) with lines of iambic trimeter (six syllables), and the rhyme scheme is ABCB. Since this is formal verse, the second stanza should be expected to repeat the same pattern (the same meter and rhyme scheme, but using different rhymes), which it does.

In free verse—or, poetry without meter or rhyme scheme—the stanza is a unit that is defined by meaning or pacing, rather than by meter or rhyme. In other words, a stanza break may be used in free verse to create a pause in the poem, or to signal a shift in the poem's focus. In free verse, unlike in formal verse, stanzas are often irregular throughout the poem, so a poem may contain a dozen two-line couplets shuffled in with a handful of six-line sestets and one much longer stanza.

Here's an example of the use of stanza breaks in free verse—an excerpt from the poem "A Sharply Worded Silence" by Louise Glück—which consists of a four-line quatrain, followed by a single line, followed by a three-line tercet. Notice how the stanza breaks serve to break the poem into units of speech or thought—much like paragraphs in prose.

Because it is the nature of garden paths
to be circular, each night, after my wanderings,
I would find myself at my front door, staring at it,
barely able to make out, in darkness, the glittering knob.

It was, she said, a great discovery, albeit my real life.

But certain nights, she said, the moon was barely visible through the clouds
and the music never started. A night of pure discouragement.
And still the next night I would begin again, and often all would be well.

For the most part, stanzas are named according to the number of lines they contain.

Other Types of Stanzas

Breaking Down and Adding Up Stanzas

Stanzas consisting of four or more lines may sometimes be described as containing shorter stanzas within them, even if there is no stanza break. For example, the first two lines of a quatrain may be referred to as a couplet, even if they do not form their own stanza. This can make it easier, when speaking or writing about a poem, to break larger pieces down into units that are shorter than stanzas but longer than individual lines.

The same is true of grouping multiple stanzas together. Two distinct quatrains may be described as making up a single octave, as is often the case with sonnets—the two quatrains that begin a sonnet are, together, referred to as the octave. Similarly, the two halves of an octave can always also be referred to as quatrains. What this means is that while stanzas are usually set off from other stanzas by lines breaks or indentation, that isn't always the case. For instance, fourteen-line sonnets often appear without any stanza breaks at all—and yet the first eight lines of the poem are still referred to as the octave.

"Strophe," like "stanza," is a term that refers to a grouping of lines in poetry. In some cases it can be used interchangeably with "stanza," while in others it can't:

To put it another way: all strophes are stanzas, but not all stanzas are strophes.

Here's a contemporary example of the use of couplets in a work of free verse by the poet Max Ritvo.

His father told him never start writing
or reading in the middle of a book.

This was life’s taproot — the obedient
boy began always at the beginning.

Books start out with what the boy calls Beauty
— the boat’s still in port. The cat’s alive. Pantry’s packed.

Tercets are the basic unit of a form known as the villanelle, which follows an ABA rhyme scheme and has two refrains that repeat throughout the poem. These two tercets are the opening two stanzas of one of the more famous modern examples of the villanelle, Dylan Thomas;s "Do no go gentle into that good night."

Do not go gentle into that good night,
Old age should burn and rave at close of day;
Rage, rage against the dying of the light.

Though wise men at their end know dark is right,
Because their words had forked no lightning they
Do not go gentle into that good night.

Quatrains in Millay's "The Ballad of the Harp-Weaver"

This ballad by Edna St. Vincent Millay uses quatrains with a rhyme scheme of ABCB.

“Son,” said my mother,
When I was knee-high,
“You’ve need of clothes to cover you,
And not a rag have I.

“There’s nothing in the house
To make a boy breeches,
Nor shears to cut a cloth with
Nor thread to take stitches.

Cinquain in Poe's "To Helen"

Here's an example of a poem by Edgar Allen Poe written entirely in cinquains. In this example, the rhyme scheme is not consistent between stanzas—Poe uses ABABB in the first and ABABA in the second, and ABBAB in the third.

Helen, thy beauty is to me
Like those Nicean barks of yore
That gently, o'er a perfumed sea,
The weary, way-worn wanderer bore
To his own native shore.

On desperate seas long wont to roam,
Thy hyacinth hair, thy classic face,
Thy Naiad airs have brought me home
To the glory that was Greece,
And the grandeur that was Rome.

Lo, in yon brilliant window-niche
How statue-like I see thee stand,
The agate lamp within thy hand,
Ah! Psyche, from the regions which
Are Holy Land!

The lines at the end of this sonnet may be referred to as a "rhyming couplet." This couplet is distinguished from the rest of the poem not by a double line break, but by indentation—as well as by the fact that it uses a separate rhyme scheme from the rest of the sonnet. (In keeping with the form of the English sonnet, this poem uses a rhyme scheme of ABAB CDCD EFEF GG. Notice how the final two lines are the only adjacent lines in the whole poem to rhyme; this is yet another factor that sets them apart as a couplet.)

Those hours, that with gentle work did frame
The lovely gaze where every eye doth dwell,
Will play the tyrants to the very same
And that unfair which fairly doth excel;
For never-resting time leads summer on
To hideous winter, and confounds him there;
Sap checked with frost, and lusty leaves quite gone,
Beauty o'er-snowed and bareness every where:
Then were not summer's distillation left,
A liquid prisoner pent in walls of glass,
Beauty's effect with beauty were bereft,
Nor it, nor no remembrance what it was:
But flowers distilled, though they with winter meet,
Leese but their show; their substance still lives sweet.

This brief excerpt from a longer love poem by the Roman poet Ovid makes use of elegiac couplets (though the original meter is lost in translation). Although the couplets aren't separated from one another by double line breaks, each half of the quatrain below may be referred to as a couplet because of the metrical pattern they followed in the original Latin, as well as the AABB rhyme scheme they follow in English.

Heav'n knows, dear maid, I love no other fair;
In thee lives all my love, my heav'n lies there.
Oh! may I by indulgent Fate's decree,
With thee lead all my life, and die with thee.

Envoi in Kipling's "Sestina of the Tramp-Royal"

This sestina by Rudyard Kipling is a good example of the sestina's use of envoi, a brief concluding stanza to a poem. The example here is an excerpt of the sestina's final stanza and the envoi. This envoi has three lines, as do all envois in sestinas. Envois also often appear in the poetic form called ballades, where they may have four or more lines.

It’s like a book, I think, this bloomin’ world,
Which you can read and care for just so long,
But presently you feel that you will die
Unless you get the page you’re readin’ done,
An’ turn another—likely not so good;
But what you’re after is to turn ’em all.

Gawd bless this world! Whatever she ’ath done—
Excep’ when awful long I’ve found it good.
So write, before I die, ‘’E liked it all!’

Here's an example of a poem in which the poet uses indentation to differentiate the stanzas, rather than double line breaks. This poem is a "caudate sonnet," a variation on the sonnet that consists of an octave (or two quatrains) and a sestet (two tercets) followed by a brief concluding portion called a coda, which consists here of two tercets. Milton uses indentation to accentuate lines that are, in a traditional sonnet, the first lines of stanzas. Here, we've color-coded the different stanzas so it's easier to see how the indentation signals stanza breaks.

BECAUSE you have thrown off your Prelate Lord,
And with stiff vows renounced his Liturgy,
To seize the widowed whore Plurality,
From them whose sin ye envied, not abhorred,
Dare ye for this adjure the civil sword
To force our consciences that Christ set free,
And ride us with a Classic Hierarchy,
Taught ye by mere A. S. and Rutherford?
Men whose life, learning, faith, and pure intent,
Would have been held in high esteem with Paul
Must now be named and printed heretics
By shallow Edwards and Scotch What-d’ye-call!
But we do hope to find out all your tricks,
Your plots and packing, worse than those of Trent,
That so the Parliament
May with their wholesome and preventive shears
Clip your phylacteries, though baulk your ears,
And succour our just fears,
When they shall read this clearly in your charge:
New Presbyter is but old Priest writ large.

This is an example of stanzas in songs with lyrics. "Ring of Fire," a song by the American folk musician Johnny Cash, has verses of four lines and a chorus of five lines. The rhyme scheme is different between the verses and the chorus; it shifts from AABB in the verse to ABACA in the chorus. The excerpt below shows the first stanza of the song and the chorus.

Why Do Writers Use Stanzas?

Stanzas are used, much like paragraphs in prose, to group related ideas into units. This helps the poem to feel more structured and, therefore, more digestible to the reader or listener. The specific length, meter, and rhyme scheme of a stanza may be dictated by the poem's form, or they may be decisions that the poet makes freely according to his or her artistic vision. For example, a single-line stanza can be used to convey an image in a dramatic fashion, or an eight-line stanza can be used to convey one long, complex thought. 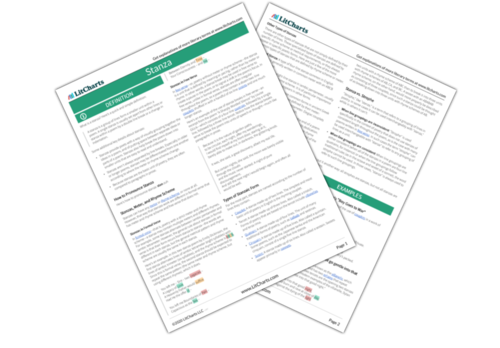