What is epistrophe? Here’s a quick and simple definition:

Epistrophe is a figure of speech in which one or more words repeat at the end of successive phrases, clauses, or sentences. In his Gettysburg Address, Abraham Lincoln urged the American people to ensure that, "government of the people, by the people, for the people,shall not perish from the earth." His repetition of "the people" at the end of each clause is an example of epistrophe.

Some additional key details about epistrophe:

The repeated words of epistrophe do not have to be exactly the same. In fact, the dramatic, rhythmic effect of epistrophe can be even more powerful if the repeating element varies slightly each time. For instance, take the example below from Bill Gates' 2007 Harvard University address:

The first repetition of "country" is singular while the second one is plural, and the adjective changes from "this" to "developing." Even so, the repeated phrase at the end of each clause still counts as epistrophe. The minor changes from one phrase to the next don't interfere with the rhythm and repetition of Gates' speech, but actually help him emphasize his former lack of knowledge about humanitarian issues both at home and abroad.

Not to be confused with epistrophe is its opposite, anaphora, which is the repetition of one or more words at the beginning of successive phrases, clauses, or sentences. Martin Luther King Jr.'s repetition of the words "let freedom ring" in his famous "I have a Dream" speech are an example of anaphora:

Using both anaphora and epistrophe at the same time creates another figure of speech called symploce. The following quote from Shakespeare's play Measure for Measure shows symploce in action:

Telling Epistrophe From Other Kinds of Repetition

The above examples of anaphora and symploce are fairly clear cut, and unlikely to be confused with epistrophe. However, the line that separates epistrophe from other forms of repetition can be blurry. For instance, take Sojourner Truth's use of repetition in her famous 1851 speech "Ain't I a Woman?":

Technically, the above is not an example of epistrophe, because the repetitions occur as their own sentences, and therefore aren't located at the end of successive phrases, clauses or sentences. This sort of repetition is actually called a refrain.

However, if the person who wrote down Sojourner Truth's speech had just punctuated it differently, then it could have been an example of epistrophe. Take that same speech, and replace the exclamation points with colons, for instance:

Now the repeated words do occur at the end of successive sentences, and so it would be epistrophe. There are two points to take from this:

Use of epistrophe is widespread, and can be found in all sorts of literature, in political and other speeches, and in song lyrics.

Epistrophe is regularly found throughout literature, in drama, prose, and poetry. It can be used to communicate different ideas and feelings, as the examples below illustrate, though always through the emphasis provided by repetition.

Epistrophe in Shakespeare's The Merchant of Venice

In this passage from Act 5, Scene 1 of The Merchant of Venice, Portia has just criticized her fiancé Bassanio (the speaker) for giving away his wedding ring (she in fact tricked him into giving it to her while she was in disguise). Bassanio's spoken epistrophe, his repetition of "the ring," emphasizes that the ring is a symbol of commitment and also Bassanio's scrambling desperation to explain to Portia that he has not broken that commitment:

Epistrophe in John Steinbeck's The Grapes of Wrath

In this example from Chapter 28 of the The Grapes of Wrath, Steinbeck's use of epistrophe in Tom Joad's farewell dialog with his mother emphasizes Joad's desire both to provide her with some reassurance and continue to be there for her:

Joad's repetition of his presence wherever poor people need help also emphasizes his dedication to the cause he believes in, and turns him into an almost mythological or godly presence who is always there to protect and support the downtrodden.

Epistrophe in Walt Whitman's "Song of Myself"

In these lines from Section 16 of his poem"Song of Myself," Whitman uses epistrophe to communicate a sense of contentment, acceptance of his own identity and place in the world:

I resist any thing better than my own diversity,
Breathe the air but leave plenty after me,
And am not stuck up, and am in my place.

The repetition at the heart of epistrophe creates emphasis and urgency, can put persuasive focus on particular ideas, and can create a rhythm that can capture the attention and sentiment of a crowd. In other words, it's great for speeches.

Lincoln's "Gettysburg Address" contains one of the most familiar examples of epistrophe.

It is rather for us to be here dedicated to the great task remaining before us—that from these honored dead we take increased devotion to that cause for which they here gave the last full measure of devotion—that we here highly resolve that these dead shall not have died in vain—that this nation, under God, shall have a new birth of freedom, and that government of the people, by the people, for the people, shall not perish from the earth.

His repetition of "the people" emphasizes his belief in the founding idea of the United States—that it is a government that serves the people, as opposed to the other way around—and also a statement of belief in and a challenge to the people who make up the country. It is a rallying cry that in the wake of the Civil War the American people must persevere, must repeat and continue the work of those who died in the war to preserve the ideals and nation for which they fought.

In his Special Message to the Congress: "The American Promise" President Johnson spoke of his support for voting rights for all Americans. In the example below, he uses epistrophe to strongly urge Americans to come together on this issue:

Though we've already covered a number of political speeches that use epistrophe, this last example from President Obama's Charleston Address shows another way in which epistrophe can be a powerful tool, which is through its connection to song. Obama delivered this speech in front of a church congregation to honor members who had died in a shooting. After singing the spiritual "Amazing Grace," he brings up each victim and describes how he or she "found that grace":

Amazing grace, how sweet the sound, that saved a wretch like me;
I once was lost, but now I'm found; was blind but now I see.

Simply by taking the word "grace" from the song lyrics and repeating it throughout the speech, Obama is able to pay a powerful tribute to the individual victims of the tragedy by weaving their names into the musical tradition of this religious community.

Politicians use epistrophe to give their speeches a catchy rhythm or cadence, which in turn helps them emphasize their ideas. In much the same way, songwriters spanning every genre from pop to jazz use epistrophe to complement the beat or composition of a song and communicate powerful emotions.

Epistrophe in "Single Ladies" by Beyoncé

Epistrophe in "Just Like a Woman" by Bob Dylan

Epistrophe in "And I love her" by the Beatles

Why Do Writers Use Epistrophe?

Writers use epistrophe to give a sequence of words emphasis, for a variety of reasons:

Songwriters, poets and authors often use epistrophe to increase the emotional weight of a description or dialogue. For instance, take this example from Edgar Allen Poe's Annabel Lee, in which the narrator recalls his childhood love who died young of an illness:

And neither the angels in heaven above,
Nor the demons down under the sea,
Can ever dissever my soul from the soul
Of the beautiful Annabel Lee.

For the moon never beams without bringing me dreams
Of the beautiful Annabel Lee;
And the stars never rise but I feel the bright eyes
Of the beautiful Annabel Lee;
And so, all the night-tide, I lie down by the side
Of my darling- my darling- my life and my bride,
In the sepulchre there by the sea,
In her tomb by the sounding sea.

Poe could not have picked a more perfect way to describe his longing for Annabel Lee than through the use of epistrophe, especially when we consider the origins of the word—in Greek, the word "epistrophe" means "a turning about." By including a verbal "turning about" in the form of the Annabel Lee epistrophe, Poe brings to mind his soul's constant "turning about" in search of his lost love. In addition, the epistrophe also creates a repetitive cadence that recalls the rhythm of the tide coming in and out, and evokes the setting of Poe's love affair with Annabel in a seaside town. 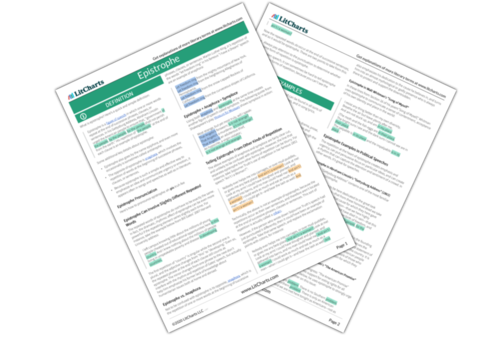