What is an epigraph? Here’s a quick and simple definition:

An epigraph is a short quotation, phrase, or poem that is placed at the beginning of another piece of writing to encapsulate that work's main themes and to set the tone. For instance, the epigraph of Mary Shelley's Frankenstein is taken from Milton's Paradise Lost, and establishes the book's main theme (i.e., the relationship of contempt between creators and their creations): "Did I request thee, Maker, from my clay / To mould me Man, did I solicit thee / From darkness to promote me?"

Some additional key details about epigraphs:

How to Pronounce Epigraph

Here's how to pronounce epigraph: ep-ih-graff

Epigraphs are an often-overlooked component of literary works. Because they're a part of the "front matter" (or the material that precedes the actual beginning of the work) it's easy for readers to breeze right past them without even noticing. Furthermore, the relationship between the epigraph and the rest of the text is not always 100% clear, since the author never—or very rarely—explains the significance of their epigraph outright. For that reason, it's up to the reader to determine what the epigraph "means" in relation to the text, which is typically only possible after they've finished reading the entire work, since it's only then that all the work's themes can be fully understood. Epigraphs can be thought of as the reader's first hint as to the themes of the work they're about to read.

Epigraphs and epigrams are often confused for one another. The words sound very similar and do refer to somewhat similar things—they're both short, highly quotable blocks of text. But they are not the same. Here's a quick overview of epigrams to help clear up the difference:

To sum up the difference between epigrams and epigraphs:

Some Epigraphs Are Epigrams (and Some Aren't)

The following epigraphs, taken from novels and poetry, exemplify how a work can be strengthened by placing it in dialogue with a quotation or excerpt from another writer's work.

The Great Gatsby tells the story of Jay Gatsby, a man who claws his way (through dubious means) into high society New York in order to win the affection of the love of his life, a married woman named Daisy Buchanan. One of the novel's major themes is the blindness and determination with which people pursue dreams that turn out to be hollow. The book's epigraph hints at this theme:

Then wear the gold hat, if that will move her; If you can bounce high, bounce for her too, Till she cry Lover, gold-hatted, high-bouncing lover, I must have you!” — Thomas Parke D’Invilliers

The suggestion is not just that people will do anything to win their object of desire, but that the entire courtship ritual is a silly and arbitrary dance.

The Absolutely True Diary of a Part-Time Indian tells the story of Junior, a Native American born with hydrocephalus, and who feels like a kind of double-outsider, both from his own tribe and from the rest of America. Junior takes refuge in his drawing, through which he finds the strength to believe in himself and fight for a better future for himself. The book's epigraph reads:

There is another world, but it is in this one. — W.B. Yeats

The epigraph points to one of the book's main themes: that finding a sense of belonging often requires looking beyond appearances and the approval of others, to discover a rich inner world and a source of strength that transcends superficial social boundaries. By the end of the book, against all odds, Junior has found a place for himself in the world, overcoming racial and social divisions to earn the respect of his peers.

Epigraph in Arundathi Roy's The God of Small Things

The events of The God of Small Things center around the life of one family in India, and are revealed in a fragmentary manner, jumping between different years and perspectives. This is important to the structure of the story because the main events of the story—the drowning of a little girl, the sexual molestation of a little boy, and a woman's affair with a man of a lower caste—all set off chains of events that mean very different things to the different people involved. Therefore, the different perspectives given in the story are critical to actually understanding what took place and its significance—and no one person's story is adequate by itself. The book's epigraph sums this up nicely:

Never again will a single story be told as though it’s the only one. — John Berger

Epigraph in Jorie Graham's The Errancy

The epigraph of Jorie Graham's 1997 collection The Errancy is a line from the poetry of Thomas Wyatt:

Since in a net I seek to hold the wind.

The epigraph frames the collection of poetry as an attempt to hold the wind in a net, calling attention to the impossibility of the project of expressing the inexpressible through language, but also seeming to affirm the project as a worthwhile and beautiful one.

Why Do Writers Choose to Write Epigraphs?

Many works of literature don't include epigraphs at all, but a writer might choose to attach one to their work for any of the following reasons: 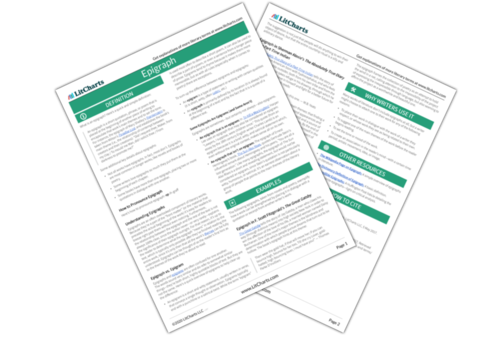