What is diacope? Here’s a quick and simple definition:

Diacope is a figure of speech in which a word or phrase is repeated with a small number of intervening words. The first line of Anna Karenina by Leo Tolstoy, "Happy families are all alike; every unhappy family is unhappy in its own way," is an example of diacope.

Some additional key details about diacope:

There are some additional guidelines about diacope that are helpful to know in order to fully understand it.

The Repeated Words of Diacope Can be Slightly Different

As in most types of rhetorical repetition, the repeated words of diacope don't have to be strictly identical—which makes sense, since repeated words often need to be altered for the tense or grammar of a sentence to work properly. The following sentence from Russell Baker's Growing Up is an example of diacope even though the word "prim" appears in slightly different form:

He wore prim vested suits with neckties blocked primly against the collar buttons of his primly starched white suits.

Multiple Instances of Diacope Can Overlap

Vocative diacope refers to a common type of diacope that addresses a person directly by using their name, title, or some other reference to a person or people between the repeated phrases of diacope as in, "Help! Somebody, help!" Other examples of vocative diacope include:

In contrast to the examples above, the sentence "Yes, a thousand times, yes!" isn't vocative (though it is an example of diacope) because the intervening words "a thousand times" do not address anybody directly. The word "vocative" derives from the latin word "vocare," meaning "to call."

Note that while elaborative diacope often uses an adjective to elaborate on its subject, it doesn't have to. James Bond's famous introduction ("The name's Bond. James Bond.") is also an example of elaborative diacope, since by sharing his first name, Bond is elaborating on the incomplete information given the first time he states his last name.

Extended diacope refers to a threefold repetition of a word or phrase, with intervening words before the final repetition. "Romeo, Romeo, wherefore art thou Romeo?" is an example of extended diacope. This is type of diacope can be used to heighten the emotion of speech even beyond what is accomplished by the double repetition of regular diacope.

Diacope and Other Rhetorical Devices

Diacope is one specific type of rhetorical device that makes use of repetition. There are many others—and sometimes they overlap. For instance, the following line from the movie A Christmas Story uses both diacope and epistrophe, the repetition of words at the ends of sentences:

Similarly, the dying words of playwright Eugene O'Neill contain both diacope and epanalepsis, the repetition of a phrase at the beginning and end of the same sentence.

Diacope abounds in poetry and prose. It's so common that examples can be found easily in almost any book.

Diacope in James Joyce's "The Dead"

In the final paragraph of "The Dead," when the narrator describes snow falling in Ireland, diacope works to imitate the effect of snow gently, persistently falling on a quiet countryside. In this case, the form the writing takes (repetition) mimics its content (snow falling softly).

It was falling on every part of the dark central plain, on the treeless hills, falling softly upon the Bog of Allen and, farther westward, softly falling into the dark mutinous Shannon waves.

As writer Henry Peacham wrote in his 1593 book, The Garden of Eloquence, "Diacope is a figure which repeateth a word putting but one word betweene, or at least very few." There's no definite limit to the number of intervening words that can be used in diacope, but it's worth noting that compared to Peacham's more traditional definition, in this example the separation between words is on the longer side.

This line spoken by the character Bella Wilfer in Dicken's Our Mutual Friend is a case of elaborative diacope that keeps on elaborating and elaborating. This use of diacope makes Bella's distaste for her poverty vivid. It's also an example of epistrophe.

I hate to be poor, and we are degradingly poor, offensively poor, miserably poor, beastly poor.

Diacope in "A Child is Born" by Stephen Vincent Benét

From a Christmas play written largely in rhyming verse, this excerpt has three difference cases of diacope, all of which work to convey the tragedy of youthful vitality slipping gradually away. The final example of diacope in this passage is elaborative.

Life is not lost by dying! Life is lost
Minute by minute, day by dragging day,
In all the thousand, small, uncaring ways.

In Virginia Woolf's Mrs. Dalloway, which is brimming with diacope, the device appears side-by-side in some passages. Here, the words "theory" and "know" are repeated. Note that the second two "theories" are an example of elaborative diacope.

Clarissa had a theory in those days—they had heaps of theories, always theories, as young people have. It was to explain the feeling they had of dissatisfaction; not knowing people; not being known.

As a tool of persuasion, diacope is commonly and often subtly used in speeches.

These remarks after the death of Princess Diana in 1997 highlight that diacope often suits discussing matters of gravity, such as loss. Blair uses the device to emphasize the magnitude of the tragedy.

Diacope in Donald Trump's Announcement of his 2016 Presidential Campaign

Donald Trump often hits on the same words when he speaks, so it's easy to identify diacope in almost any of his quotes. In these sentences from the speech Trump gave announcing his presidential campaign in 2016, he repeated three words that would go on to be central to his platform: "build," "great," and "wall."

Song lyrics, which tend to rely on repetition, frequently contain diacope. Diacope is often the reason song lyrics are catchy and memorable rather than flat and forgettable.

Diacope in "Freedom" by Beyoncé

This Beyoncé song, which references African American bondage in slavery and the fight for human rights, uses extended diacope to call both to freedom and for freedom. The fervent invocation of freedom through diacope is key to the song's emotional weight.

Freedom! Freedom! Where are you?

Cause I need freedom, too!

One of the more famous disco songs of all time makes a memorable use of vocative diatope:

Diacope in "Let Her Go" by Passenger

Part of this poignant song's punch is the repeated "you let her go," the culmination of a narrative about losing a lover.

Diacope is a prime device for highly charged, soppy, tragic, or generally dramatic moments in movie scripts. For instance, in the Rambo movie First Blood, Rambo and his army colonel use diacope in a climactic argument over the personal war Rambo is waging in a small town, as he copes with his return from Vietnam. Colonel Trautman addresses Rambo with vocative diacope, and Rambo mirrors Trautman's diacope in an attempt to defeat his argument.

Trautman: If you won't end this now, they will kill you. Is that what you want? It's over, Johnny. It's over!

Rambo: Nothing is over! Nothing! You don't just turn it off! It wasn't my war!

Repetition in advertising is key to brand-building and establishing credibility with customers. On a smaller scale, the repetition in diacope makes slogans more memorable and more persuasive. Here are some examples:

Why Do Writers Use Diacope?

As one of the more versatile repetition schemes, diacope can be used for a wide variety of purposes: to heighten the emotional register of speech; to add a sense of rhythm to the text; to make words more persuasive; and to make form and content echo each other. 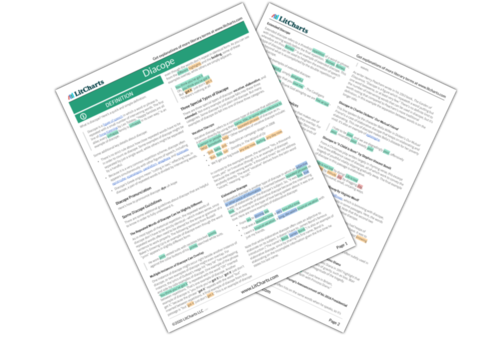