What is cacophony? Here’s a quick and simple definition:

A cacophony is a combination of words that sound harsh or unpleasant together, usually because they pack a lot of percussive or "explosive" consonants (like T, P, or K) into relatively little space. For instance, the protagonist of the children's book Tikki Tikki Tembo has a very long, very cacophonous name: Tikki Tikki Tembo No Sarimbo Hari Kari Bushkie Perry Pem Do Hai Kai Pom Pom Nikki No Meeno Dom Barako.

Some additional key details about cacophony:

How to Pronounce Cacophony

Here's how to pronounce cacophony: Kuh-koff-uh-nee

To really understand what cacophony is, it's helpful to start by getting a sense of what an "explosive consonant" is:

The Broader Definition of Cacophony

It's worth noting that some people take a much broader view of what constitutes cacophony. These people would argue that cacophony includes any grouping of words that sound unpleasant together or are difficult to pronounce—simply by virtue of containing dissimilar sounds. This definition is much less technical, so it leaves the door wide open for lots of different phrases to be interpreted as cacophonous, which can get confusing. For this reason, we've chosen to cover the narrower definition, but you should know that there are people who think differently about what things do and do not count as cacophony. (As it happens, however, most phrases that people identify as cacophonous under this broader definition do contain lots of explosive consonants—for what it's worth.)

Some websites define cacophony as any word, phrase, or sentence that is difficult to pronounce. For example, one website gives the famous tongue-twister "She sells seashells by the seashore" as an example of cacophony, but this is a mistake. While cacophonous phrases often are tricky to pronounce, not every tongue-twister or phrase that is hard to pronounce is also cacophonous. The example of "She sells seashells by the seashore" is a particularly odd one to give for cacophony because it's actually an example of sibilance—or the use of hissing sounds—which is almost the exact opposite of cacophony.

These examples of cacophony are taken from poems, plays, and novels.

Cacophony in Lewis Carroll's "The Jabberwocky"

This famous poem by Lewis Carroll uses lots of made-up words to create a jumble of cacophonous sounds. When read aloud, the poem might feels like a tongue-twister, or like you have marbles in your mouth. That's often one of the effects of cacophony. In this case, it helps create a feeling of distortion and disorientation—almost as if the reader has entered another world (which is fitting because the poem itself is about a mythical monster and takes place a fantastical world).

'Twas brillig, and the slithy toves
Did gyre and gimble in the wabe:
All mimsy were the borogoves,
And the mome raths outgrabe.

In this poem, Hart Crane uses cacophony to bring his subject to life: he's writing about one of New York's most impressive bridges, the Brooklyn Bridge—a masterwork of industry and engineering. Listening to the poem, you can almost hear the industrial sounds of the city: gears turning, subway cars careening past, electric lines buzzing.

Out of some subway scuttle, cell or loft
A bedlamite speeds to thy parapets,
Tilting there momentarily, shrill shirt ballooning,
A jest falls from the speechless caravan.

Down Wall, from girder into street noon leaks,
A rip-tooth of the sky’s acetylene;
All afternoon the cloud-flown derricks turn . . .
Thy cables breathe the North Atlantic still.

In this passage from Swift's book Gulliver's Travels, the narrator describes the experience of war using overwhelmingly cacophonous sounds. The effect is that his description creates a visceral image—not just imagined but felt through the language—of the violence of war.

I could not forbear shaking my head, and smiling a little at his ignorance. And being no stranger to the art of war, I gave him a description of cannons, culverins, muskets, carabines, pistols, bullets, powder, swords, bayonets, battles, sieges, retreats, attacks, undermines, countermines, bombardments, sea fights, ships sunk with a thousand men, twenty thousand killed on each side, dying groans, limbs flying in the air, smoke, noise, confusion, trampling to death under horses' feet, flight, pursuit, victory; fields strewed with carcases, left for food to dogs and wolves and birds of prey; plundering, stripping, ravishing, burning, and destroying.

In this famous passage from Macbeth, Lady Macbeth's speech becomes cacophonous in a moment of panicked hallucination. Her guilt over the murder for which she is partly responsible comes to the surface not only through what she says, but through the discordant way she says it.

This poem by Poe is all about making the language mimic the subject of the poem. The speaker describes the ringing of bells—four different types of bells are described throughout the poem—and by the end, the "jingling, tinkling" sound of the bells has become "throbbing and sobbing"—and has begun to torment the speaker, causing him misery and anguish. Poe makes unrelenting use of cacophony to help create the poem's maddening effect, mimicking the discordant sounds of the bells.

Why Do Writers Use Cacophony?

Cacophony is most often used by writers when they want to make the sound of the language itself mimic the subject they're writing about. In the examples above, you saw cacophony used as a tool for bringing a variety of different subject matters to life. Here are some of the things a writer might use cacophony to write about: 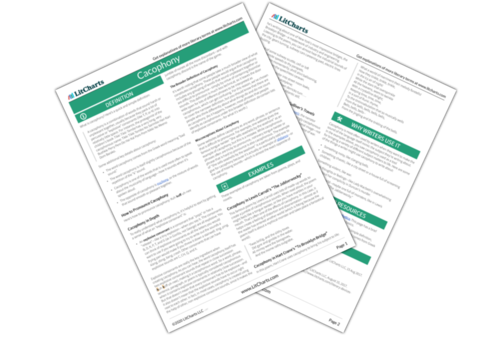