What is a round character? Here’s a quick and simple definition:

A character is said to be "round" if they are lifelike or complex. Round characters typically have fully fleshed-out and multi-faceted personalities, backgrounds, desires, and motivations. Jay Gatsby in F. Scott Fitzgerald's The Great Gatsby is a round character. A wealthy man who throws lavish parties for high-society New Yorkers, at first glance Gatsby may seem quite simple, but over the course of the book he is revealed to have a deep and complicated personal history that gives rise to some surprising motivations: his relentless pursuit of wealth and stature is driven by his desire to get close to the woman he loves.

Some additional key details about round characters:

How to Pronounce Round Character

Here's how to pronounce round character: round kare-ik-ter

Round Characters in Depth

The word "round" was first used to describe fictional characters by E M Forster in his 1927 book The Aspects of the Novel. He wrote:

The test of a round character is whether it is capable of surprising in a convincing way. If it never surprises, it is flat. If it does not convince, it is flat pretending to be round. [A round character] has the incalculability of life about it—life within the pages of a book.

Forster focuses on two main qualities in his original definition of the round character: it has to be surprising, and it has to be convincing. Many people continue to use these as the two main criteria for evaluating whether a character is round, but it's worth noting that Forster's definition could afford to be updated slightly to better reflect the broader sense the term has taken on today: namely, that a round character has to be complex and convincing. In fact, complexity seems not far off from what Forster meant by "surprising": he certainly did not mean that round characters should surprise readers by divulging a dark past or a secret identity, but rather that they must behave in ways that are not utterly formulaic, predictable, or based on simplistic notions of what people are like.

Round Character vs. Dynamic Character

It's a common mistake to use the term "dynamic" as a synonym for "round," but these terms actually refer to different aspects of the character and should not be confused. Here's a run-down of the basic difference:

Because a character's depth and complexity are typically revealed over the course of a story—and often by showing how they respond to, or are changed by, the story's central conflict—round characters do tend to also be dynamic characters, but this isn't always the case. A round character doesn't have to undergo significant changes over the course of the story in order to seem complex and lifelike. Similarly, a dynamic character isn't necessarily complex or lifelike simply because they undergo a chance in the course of the story.

Round Character vs. Flat Character

The best way to get a strong understanding of what makes a character round is actually to study the term's opposite: the flat character. Rather than being multi-dimensional, like a round character, a flat character tends to be one-dimensional. Here's the most important information about flat characters:

E. M. Forster's go-to example of a flat character is Mrs. Micawber from Charles Dickens' David Copperfield. Mrs. Micawber comes from a well-to-do family that disapproves of her husband, who is kindhearted but financially unstable. She constantly avers that she will "never leave Micawber!" She is a flat character because she is only defined by her devotion to her husband, but she still plays an important role in a narrative that focuses on the plight of the working class.

The best way to understand round characters is to look at a few examples from literature.

Round Character in John Steinbeck's East of Eden

Cal Trask struggles to overcome his own selfish impulses in Steinbeck’s novel, East of Eden. His brother, Aron, by contrast, often seems like a paragon of virtue. Therefore, the brothers have an intense rivalry between them, and they compete for their father's approval. Their father, Adam, respects Aron, who attends school to become an Episcopal priest and represents integrity in the story. Cal, on the other hand, makes a fortune by exploiting small farmers during World War I, and is generally portrayed as the morally flawed brother.

Even though it may be tempting to say that one brother is "good" and the other is "bad," the two characters are in fact very complex. For instance, while Aron is off at war, Cal falls in love with the woman Aron plans to marry—which, in a way, cements Cal’s character as someone who hurts others because of his self-interest—but he is still shown as a complicated and sympathetic character who feels conflicted about his own nature. And yet, that woman also falls in love with Cal, in part because she sees Cal as having both bad and good in him as opposed to the purely good Aron, and she sees herself as also being a mixture of both bad and good.

Steinbeck shows Cal as a character who yearns to feel love and has also suffered (particularly because of his father’s clear favoritism for Aron), so the reader is able to understand his motivations. Even if they disagree with his actions, readers can see Cal as a complicated, realistic character—who is not necessarily virtuous, but also not altogether “bad.” All told, this makes Cal a round character.

Round Character in Carson McCullers' The Ballad of the Sad Cafe

In Carson McCullers’ novella The Ballad of the Sad Café, the protagonist, Miss Amelia, is viewed suspiciously by others in her small, impoverished town. Miss Amelia runs the town store, makes the best liquor in the county, and is quite wealthy. But instead of helping her neighbors, she is shown as a calculating, selfish woman, who spends most of her time alone with her possessions—that is, until a hunchback, Cousin Lymon, comes to town, claiming to be her kin. The hardened Miss Amelia is softened by Lymon’s presence and instead of treating him coolly, as she typically does with others, she gives him liquor and dinner. Eventually, she invites Lymon to live with her, and the pair live happily together for a while. The townspeople are shocked by Miss Amelia’s change.

One day, a man named Marvin Macy, recently released from prison, returns to the town to take revenge on Miss Amelia. It is gradually revealed that many years ago, Marvin loved Miss Amelia, but Miss Amelia didn’t reciprocate Marvin's feelings, which drove him to go on a mad crime spree. The townspeople, instead of blaming Marvin for his own actions, blamed Miss Amelia for rejecting him. Thus, the reader begins to understand that their initial impressions of Miss Amelia as an unkind woman were misguided. Her character is made to seem more complicated by the revelation of new details about her history. While the townspeople have an impression of Miss Amelia as a cold, one-dimensional person and treat her poorly as a result, the reader discovers that she is, in fact, quite a complex, round character. By the end of the story, the reader understands that what they initially perceived as her selfishness was the result of the townspeople’s mistreatment of her many years prior.

Round Character in Donna Tartt's The Goldfinch

In Donna Tartt’s novel, The Goldfinch, Theodore Decker survives a terrorist bombing at an art museum at the age of 13. After watching his mother and many others die, he staggers out of the museum through the debris, taking with him a small, Dutch painting titled The Goldfinch. Tartt's novel tells Decker’s coming-of-age story; it shows how life changes and develops for Decker as he enters into a world of crime in which his only anchor is the stolen (and very valuable) painting. Eventually, Decker moves to Las Vegas with his father and befriends a boy named Boris Pavlikovsky. Boris is both shameless and whimsical; the two boys spend a lot of time together, stealing groceries and taking drugs. Because the boys spend so much time in conversation, we learn a lot about Boris's history, even though he ends up disappearing for much of the story—only to return and reveal to Decker that he stole the painting years earlier, when they were young boys, and fooled Decker by replacing it with a textbook of similar size and weight. Boris sold the painting, which has since been sold to various criminals, but he vows to find and return it to Decker.

Boris is a minor character who continues to surprise the reader, not necessarily because he undergoes profound changes as the novel progresses, but because Tartt slowly reveals the many layers of his character—which indicates that he is a round character. He is not simply a "bad boy," who steals and lies. Although he often causes trouble for Decker, he’s also loyal, has conflicting desires and motivations, and has a complex way of showing his kindness and friendship.

Why Do Writers Use Round Characters?

There are several reasons why a writer might choose to "round out" a character in their story. Here are a few of the most common ones:

Other Helpful Round Character Resources 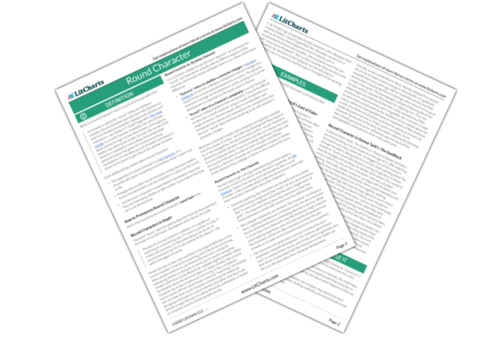