What is chiasmus? Here’s a quick and simple definition:

Chiasmus is a figure of speech in which the grammar of one phrase is inverted in the following phrase, such that two key concepts from the original phrase reappear in the second phrase in inverted order. The sentence "She has all my love; my heart belongs to her," is an example of chiasmus.

Some additional key details about chiasmus:

Here's how to pronounce chiasmus: kigh-az-muss

Chiasmus can be tricky to grasp at first, so here's a closer look at its most important elements.

The "Repeated Concepts" in Chiasmus Can Be Contrasting

We walked tiredly; drowsily, we ambled along toward the hotel.

The next sentence, on the other hand, is a case of chiasmus that uses concepts that contrast with one another:

My heart burned with anguish, and chilled was my body when I heard of his death.

While the speaker's reference to his heart is a way of describing an emotional experience, when he talks about his body he is describing a physical experience. So while the heart and body may not be exact opposites, they're related yet contrasting ideas. "Burned" and "chilled," on the other hand, are direct opposites. The result is an interesting use of chiasmus in which physical sensations—hot and cold—are used to describe both emotional and physical sensations.

One reason chiasmus is rare is that it depends on inverting the order of related concepts. So, although it's common to come across repeated concepts and syntax in a sentence, those examples might not be chiasmus. For instance, it's tempting to think this Walt Whitman quote is chiasmus:

I may be as bad as the worst, but, thank God, I am as good as the best.

After all, Whitman repeats the concepts of good/bad, and best/worst to convey that he has virtues as well as vices. But notice that the grammatical structure is duplicated ("bad as the worst," "good as the best") without any inversion of the syntax, so it's not chiasmus. Were the sentence phrased instead as, "I may be as bad as the worst, but, thank God, compared to the best I am just as good," that would make it an example of chiasmus. However, this inversion of the original phrasing sounds pretty awkward. That tendency toward awkward phrasing is one reason why chiasmus is not very common.

If Concepts Aren't Related, It's Not Chiasmus

An important rule to keep in mind when trying to identify examples of chiasmus is this: it's not chiasmus unless the concepts involved are somehow related. This isn't always easy to determine, since there are no hard and fast rules about what makes concepts related, but consider the following sentence, which isn't chiasmus despite its use of a repetition with inverted grammar.

Eleanor loved a good cup of coffee. Mike was also an object of her adoration.

In this example, Eleanor's love of something appears in both sentences, but Mike just isn't similar to a cup of coffee, nor is he the opposite of a cup of coffee. So even though this example shows the proper way to invert the grammar, this isn't a good example of chiasmus.

Related Concepts in Chiasmus Can Get Creative

In chiasmus, related concepts might not be as simple as "heart" and "love," or "burned" and "chilled." On the contrary, the concepts can be conveyed in extended, complex, and artful phrases. Take a look at Genesis 7:21-22:

And all flesh died that moved upon the earth, both of fowl, and of cattle, and of beast, and of every creeping thing that creepeth upon the earth, and every man: All in whose nostrils was the breath of life, of all that was in the dry land, died.

In this passage about a flood that covered the entire surface of the earth, life on earth is summarized as fowl, cattle, beast, humankind, and "every creeping thing that creepeth upon the earth." Then, in the following clause, "All in whose nostrils was the breath of life" is used as another phrase to refer to all life on earth. Likewise, "all that was in the dry land, died" is just another way of saying what was already stated at the start of the first clause: "all flesh died that moved upon the earth."

Note that though the grammatical structures are symmetrical in this example, the lengths of the phrases are not. So, in chiasmus, one phrase might be far longer than its parallel phrase.

When Yoda gives advice to Luke Skywalker, what makes his advice memorable is its curious grammar (as in, "When you look at the dark side, careful you must be"). Chiasmus can have a similar effect. Notice the Yoda-esque quality of the second phrase here:

She went to church, but to the bar went he.

"To the bar went he" seems to belong more to the lexicon of nursery rhymes than everyday speech, sounding less natural and more antiquated. This is one reason chiasmus is found more often formal or stylized contexts, as opposed to everyday conversation or more informal writing.

Chiasmus is closely related to another figure of speech called antimetabole. They're so similar, in fact, that the term chiasmus is often used to describe things that are actually examples of antimetabole. Here are the key differences between the two terms, summarized:

So an example of antimetabole would be, "It's nice to be important but it's more important to be nice."

If you look around the Internet, you'll find that there's a lot of disagreement over whether or not antimetabole is a type of chiasmus. The two sides of the argument can be summed up in this way:

Chiasmus is not a particularly common figure of speech in literature because it can often create language that feels formal or even stilted. Even so, it does appear occasionally in prose and, more often, in poetry, to produce a lyrical and balanced effect.

The epic poem Paradise Lost has a number of instances of chiasmus. In these lines, "Adam" parallels "Eve," and "men" parallels "women." Chiasmus gives the lines a compact and pleasing pattern, as well as a lilting cadence.

Adam, first of men,
To first of women, Eve

The excerpt from Paradise Lost below also has a pleasing sense of unity. Love and grace are related concepts, while "Without end" and "without measure" both convey endlessness.

In his face
Divine compassion visibly appeerd
Love without end, and without measure Grace

Chiasmus in Walt Whitman's Song of Myself

In this excerpt from one of Whitman's most famous poems, he brings in chiasmus at the close of a number of other lines that use different figures of speech related to balance and repetition (in this case parallelism and diacope):

Chiasmus in Kay Ryan's "He Lit a Fire with Icicles"

In this poem by Kay Ryan, chiasmus shows up quite naturally in the explanation of St. Sebolt's miracle: lighting a fire with icicles. The phrase, "He struck/ them like a steel/ to flint," expands on the preceding phrase "lit a fire," to give the reader a more vivid image of the splendid fire-making icicles.

This was the work
of St. Sebolt, one
of his miracles:
He lit a fire with
icicles. He struck
them like a steel
to flint, did St.
Sebolt...

Notice how the inclusion of the intervening words "one / of his miracles," doesn't prevent this from counting as an example of chiasmus.

In this example from Othello, Iago plants the notion in Othello's mind that his wife is unfaithful. The two clauses echo each other through synonyms: the verbs "dote" and "love" mirror each other, while the verbs "doubt" and "suspect" are also parallels.

But, oh, what damned minutes tells he o'er
Who dotes, yet doubts, suspects, yet strongly loves...

The most common use of chiasmus is as antimetabole that appears in speeches. Antimetabole's simplicity, emphatic effect, and knack for turning a phrase in an unexpected direction all make it a more popular tool in speechwriting.

Here are a few examples of chiasmus that are also examples of antimetabole from famous speeches:

These verses from Psalm 3 give a more complex example of chiasmus. The passage can be broken down into several parallel phrases. The second clause makes more specific and dramatic the content of the first clause: not only has God "smitten" all the speaker's enemies, he has broken their teeth. And not only are they the speaker's enemies, they are furthermore "wicked." Jehovah parallels God, and "Save me" parallels "the salvation." (This passage is also an example of epanalepsis, a figure of speech in which the beginning of a clause or sentence is repeated at the end of that same clause or sentence)

Save me, O my God, for thou has smitten all my enemies on the cheek-bone; The teeth of the wicked thou has broken; to Jehovah, the salvation.

These verses from The Book of Mormon use chiasmus to build an argument for embracing God. In this passage, every single phrase is mirrored by a related phrase. The pattern chiasmus creates here serves to reiterate and elaborate upon ideas. For instance, "become as little children" is expanded, at the end of the passage, to mean, "submissive, meek, humble, patient, full of love, willing to submit to all things."

But men drink damnation to their souls except they humble themselves and become as little children, and believe that salvation was, and is, and is to come, through the atoning blood of Christ, the Lord Omnipotent. For the natural man is an enemy to God, and has been from the fall of Adam, and will be, forever and ever, unless he yields to the enticing of the Holy Spirit, and putteth off the natural man, becometh a saint through the atonement of Christ the Lord, and becometh as a child submissive, meek, humble, patient, full of love, willing to submit to all things.

This example of chiasmus in the Quran is also an example of antimetabole. In this verse, chiasmus is used to stress Allah's omnipotence, as everything on earth is encompassed in "the living" and "the dead."

Why Do Writers Use Chiasmus?

Writers use chiasmus to present and elaborate upon an idea, to persuade and move an audience, and to lend a harmonious quality to writing through organized, but not always exact, repetition.

Chiasmus Can Present, then Deepen, an Idea

When chiasmus involves repeated concepts rather than simply repeated words (as in antimetabole), the structure can allow an idea to be deepened or expanded in the latter clauses. Take this sentence:

All the schoolchildren were cruel. Killing ants, pinching legs, and stomping on flowers were the favorite habits of the children.

The first half uses the adjective "cruel," which is abstract. The second half elaborates on that cruelty, adding valuable and concrete detail and imagery. Note that the halves aren't of symmetrical length—the second half incorporates a much longer element.

Chiasmus is a Persuasive, Dynamic Tool of Rhetoric

Like all figures of speech based on repetition, chiasmus can be a tool to craft persuasive rhetoric. It's used to reiterate concepts, to condense a complex idea to a manageable size, and to draw connections between contrasting ideas. Though not terribly common, chiasmus appears in various forms, from axioms ("It's hard to make time, but to waste it is easy") to rousing rhetoric, often in the form of antimetabole ("Ask not what your country can do for you, ask what you can do for your country). Furthermore, inverted grammar can bring a sense of gravity to a sentence (What is stolen without remorse, with guilt must be repaid). 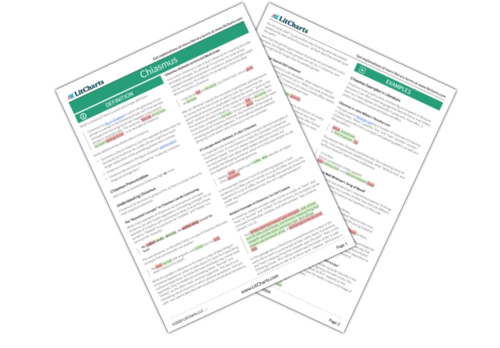