What is a syllogism? Here’s a quick and simple definition:

Some additional key details about syllogisms:

Here's how to pronounce syllogism: sil-uh-jiz-um

Syllogisms can be represented using the following three-line structure, in which A, B, and C stand for the different terms:

Another way of saying the same thing is as follows:

Notice how the "A" functions as a kind of "middle" for the other terms. You could, for instance, write the syllogism as: C = A = B, therefore C = B.

Over the years, more than two dozen different variations of syllogisms have been identified. Most of them are pretty technical and obscure. But it's worth being familiar with the most common types of syllogisms.

Particular syllogisms use words like "some" or "most" instead of "all" or "none." Within this category, there are two main types:

Enthymemes are logical arguments in which one or more of the premises is not explicitly stated, but is instead implied. Put another way: an enthymeme is a kind of abbreviated syllogism in which the writer presumes that the audience will accept the implied and unstated premise. For instance, the following statement is an enthymeme:

This enthymeme is an abbreviation of a famous syllogism:

The enthymeme leaves out the major premise. It instead assumes that all readers will understand and agree that "Socrates is mortal because he's human" without needing the explicit statement that "all humans are mortal."

A "fallacy" is the name for a mistake in logic. Syllogisms often seem like very simple statements, but you may be surprised how often people make logical mistakes when trying to put together simple syllogisms. For example, it may seem logical to make a statement like "Some A are B, and some C are A, therefore some C are B," such as:

Each of these categorical propositions is, after all, true—but in fact the final proposition, while true in itself, is not the logical conclusion of the two preceding premises. In other words, the first two propositions, when combined, don't actually prove that the conclusion is true. So even though each statement is independently true, the "syllogism" above is actually a logical fallacy. Here's an example of a false syllogism whose logical fallacy is a bit easier to see.

The error in both of the above examples is called the "fallacy of the undistributed middle," since in each example the A is not "distributed" across the B and C in such a way that the B and C terms actually overlap. Other types of syllogistic fallacies exist, but this is by far the most common logical error people make with syllogisms.

Syllogisms appear more often in rhetoric and logical argumentation than they do in literature, but the following are a few of the more memorable examples of the use of syllogism in literature.

Syllogism in Timon of Athens by Shakespeare

In this passage from a lesser-known work of Shakespeare, titled Timon of Athens, the character Flavius asks Timon whether he has forgotten him. Timon responds with a syllogism.

Flavius: Have you forgot me, sir?
Timon: Why dost ask that? I have forgot all men;
Then, if thou grant’st thou’rt a man, I have forgot thee.

So the structure of Timon's syllogism is as follows:

Syllogistic Fallacy in The Merchant of Venice by Shakespeare

In The Merchant of Venice, a beautiful, young woman named Portia is arranged to marry whomever can correctly guess which of three caskets contains her portrait: the gold, the silver, or the lead casket. A prince comes to solve the riddle, and thinks he has worked out the answer when he reads the following inscription on the gold casket:

“Who chooseth me shall gain what many men desire.”

Upon reading this inscription, the suitor immediately exclaims:

Why, that’s the lady. All the world desires her.

But he's mistaken; the gold casket does not contain the portrait of Portia. The suitor clearly thinks he has made a logical deduction using the structure of a syllogism:

The following poem by John Donne contains a syllogism, though Donne takes some liberties with language in putting his syllogism together:

All love is wonder; if we justly do
Account her wonderful, why not lovely too?

These lines could be translated into the structure of a syllogism like so:

Syllogism in "To His Coy Mistress" by Andrew Marvell

If you look closely, you can see that this poem by Andre Marvell contains a subtle syllogism, scattered throughout the poem. Embedded in the beginning, middle, and end of the poem are the major premise, the minor premise, and the conclusion.

Had we but world enough and time,
This coyness, lady, were no crime.
We would sit down, and think which way
To walk, and pass our long love’s day.
Thou by the Indian Ganges’ side
Shouldst rubies find; I by the tide
Of Humber would complain. I would
Love you ten years before the flood,
And you should, if you please, refuse
Till the conversion of the Jews.
My vegetable love should grow
Vaster than empires and more slow;
An hundred years should go to praise
Thine eyes, and on thy forehead gaze;
Two hundred to adore each breast,
But thirty thousand to the rest;
An age at least to every part,
And the last age should show your heart.
For, lady, you deserve this state,
Nor would I love at lower rate.
But at my back I always hear
Time’s wingèd chariot hurrying near;
And yonder all before us lie
Deserts of vast eternity.
Thy beauty shall no more be found;
Nor, in thy marble vault, shall sound
My echoing song; then worms shall try
That long-preserved virginity,
And your quaint honour turn to dust,
And into ashes all my lust;
The grave’s a fine and private place,
But none, I think, do there embrace.
Now therefore, while the youthful hue
Sits on thy skin like morning dew,
And while thy willing soul transpires
At every pore with instant fires,
Now let us sport us while we may,
And now, like amorous birds of prey,
Rather at once our time devour
Than languish in his slow-chapped power.

Why Do Writers Use Syllogisms?

Writers use syllogisms because they're a useful tool for making an argument more convincing in persuasive writing and rhetoric. More specifically, writers might choose to use syllogism because: 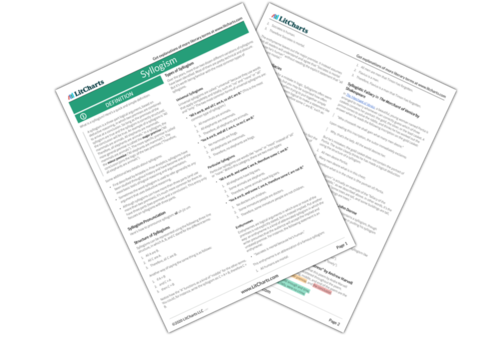