What is an antagonist? Here’s a quick and simple definition:

Some additional key details about antagonists:

Here's how to pronounce antagonist: an-tag-uh-nist

When most people think of an antagonist, they think of a "bad guy," like the villains in superhero movies. But there are actually many different types of antagonist, of which the standard villain is just one.

Examples of a Complicated Antagonist

The narrative of Frankenstein is about a man named Victor Frankenstein who creates a monster, which is referred to as the Creature. The Creature ultimately turns against his creator and wrecks Victor's life. But the monster is not a simple villain antagonist. As the novel makes clear, the monster acts as he does because Victor first abandons the monster after creating it, and then refuses to create a companion monster to alleviate the monster's terrible loneliness. The monster's revenge is to make Victor just as alone, by murdering Victor's loved ones. Further, at one point of the novel the Creature tells Victor his story of being alone after Victor abandoned him—for that portion of the novel, the monster becomes the protagonist of his own story. Over all, Victor is the protagonist of Frankenstein: the audience sees the story through Victor's eyes, knowing what Victor knows and understanding the consequences of events by what Victors feels and recounts. The audience sympathizes with Victor. But the audience also sympathizes to an extent with the Creature, which becomes a murderous villain out of its own sense of having been dreadfully wronged. The Creature is a villain, but an understandable one, and so it is a complicated antagonist.

There are several closely related terms that are often confused with antagonist, but there are critical differences among them that are important to know in order to better understand how to identify an antagonist.

In the 2017 film, Wonder Woman, Diana Prince saves an American spy and pilot, Captain Steve Trevor, after he crashes near the hidden island where she and the Amazonian race of warrior women live. After he tells the Amazonians about the destruction happening in the world as a result of World War I, Diana decides to accompany him to the war's front line. She believes it to be Ares—a villain based on the Greek god of war—who is responsible, and that if Ares dies the war will end. It isn't until the very end of the movie that Ares' identity is revealed, and the two characters battle. While Ares has relatively little time on the screen, and there are plenty of other villains in this story, it is clear that Ares' evildoing has been the primary cause of suffering for the protagonist and those she wants to save, which makes Ares the primary villain antagonist in this narrative.

The protagonist of the TV series Breaking Bad is Walter White, a high school chemistry teacher diagnosed with inoperable lung cancer. In order to leave his family on secure financial footing, he begins making and selling the illegal drug known as crystal meth. While White's fundamental desire might be a good one—helping his family—his life of crime quickly spirals out of control, and he becomes the show's villain protagonist. Meanwhile, White's brother-in-law, Hank, is an ambitious and fearless agent for the Drug Enforcement Agency who will go to any length to find a local drug dealer known as Heisenberg (who is actually Walter White). Hank has mostly noble intentions (he wants to keep the public safe), and he continuously foils White's drug-dealing plans, which makes him the hero antagonist.

Th dystopian novel 1984 depicts a political reality in which the present-day Great Britain, called Airstrip One in the novel, is controlled by a system of government called The Party. The country is in perpetual war, surveillance systems watch and control the population's every move with a brigade of Thought Police (who punish individualism), and everyone is constantly manipulated through propaganda. The narrative follows the protagonist Winston as he becomes critical of The Party and begins to keep a journal criticizing it. He begins a surreptitious affair with a woman named Julia after he discovers that she shares some of his feelings. The pair have to be cunning to avoid getting caught by the Thought Police, but eventually, they're discovered through a sting operation and tortured. While the Party in the novel is represented through a character named O'Brien who might be identified as the antagonist of the novel, you could also argue that the true antagonist of the novel is the entire group of The Party because it is the broader faceless party, and not a high-level functionary of the party like O'Brien, that is the pervasive force that impedes Winston.

The premise of the film Deep Impact is that a comet is heading for Earth. The narrative mostly follows a young teenage astronomer, who first discovered the comet, but also weaves among other characters and the ways in which they brace for the comet's impact as it hurtles toward the Earth, where it will likely kill everyone. The main conflict is a race against time as scientists, politicians, and the young astronomer try to thwart the disaster. A group of astronauts in outer space are able to break up part of the comet, but not all of it—so the astronauts make the brave decision to crash their ship, along with all its remaining explosives, into the second part of the comet, thus saving Earth from complete destruction. The central tension of the film is created by the comet's path toward Earth, which makes the comet itself an example of a non-human antagonist.

What's the Function of an Antagonist in Literature?

While a protagonist tends to supply a storyline with a person that the audience can identify with or "root for" as they strive to achieve some goal, the antagonist is who or what creates the tension or conflict that makes that goal harder to reach. Without an antagonist, many stories would seem to lack a sense of drama or action, and the protagonist wouldn't face any challenges in reaching their goal. The antagonist agitates or disrupts the protagonist, and therefore introduces conflict to a plot. In a typical narrative this conflict brings about a plot's climax and generally serves as the premise for much of the story's action, which makes a narrative engaging. Conflicts brought about by an antagonist can also test the morals and beliefs of characters, which shows the audience who the main characters really are and what they stand for. 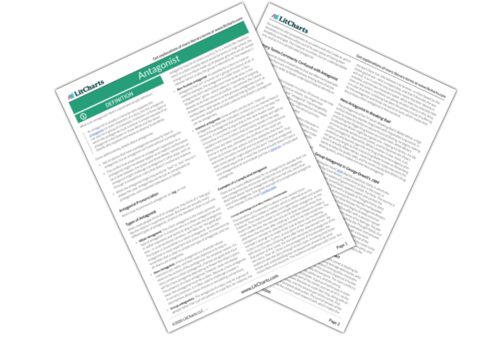