What is a couplet? Here’s a quick and simple definition:

A couplet is a unit of two lines of poetry, especially lines that use the same or similar meter, form a rhyme, or are separated from other lines by a double line break.

Some additional key details about couplets:

How to Pronounce Couplet

Here's how to pronounce couplet: cup-let

Couplets are easiest to identify when they stand alone. Sometimes a couplet stands alone because it forms an entire two-line poem. For example, Alexander Pope's famous two-line epigram that he engraved on the collar of a puppy given to the Prince of Wales:

I am his highness's dog at Kew;
Pray tell me, sir, whose dog are you?

Other couplets stand alone because a poem's double line breaks create two-line stanzas. For example, Robert Creeley's poem "The Whip" is written entirely in couplets without rhyme. Here are the first two stanzas:

I spent a night turning in bed,
my love was a feather, a flat

sleeping thing. She was
very white

However, a poem does not have to be entirely broken into couplets to include stand-alone couplets; couplets also occur in poems with stanzas of varying lengths. For example, the first two stanzas of Robert Creeley's poem "The Innocence" are a couplet followed by a tercet:

Looking to the sea, it is a line
of unbroken mountains.

It is the sky.
It is the ground. There
we live, on it.

Though stanzas that are exactly two lines long are the clearest examples of couplets, the term "couplet" also refers to two-line groupings within longer stanzas. This is slightly confusing; while any two consecutive lines of verse may be called a couplet, there are some two-line groupings that are much more conventionally accepted as couplets.

The most accepted way to break a longer stanza into couplets is through meter and rhyme scheme. For that reason, it's helpful to have a strong grasp of what meter and rhyme scheme are in order to understand how to identify couplets. We provide more details about these terms on their own pages, but offer a quick primer here.

Rhyme scheme is the most straightforward way to identify couplets within a longer stanza. Since rhyme schemes are repeating patterns, those patterns naturally suggest ways to break longer stanzas into shorter units. There are two types of couplets that can be defined using couplets: rhymed couplets and unrhymed couplets.

Rhymed couplets, unsurprisingly, are couplets in which the two lines share a rhyme. For example, in a quatrain (a four-line stanza) with a rhyme scheme of AABB, both AA and BB are couplets—without even knowing what those lines say, their rhymes make it clear which lines go together. The same is true of longer stanzas, such as a sestet (six-line stanza) with the rhyme scheme AABBCC or AABBAA.

Rhymed couplets are reasonably easy to identify because they are governed by clear rules. The most basic rule is that a rhymed couplet must be two lines in formal verse (poetry with meter and rhyme scheme) that share the same end-rhyme. Within that broad definition, there are even more specific types of rhymed couplets that appear frequently in formal verse. The most common of those are:

Rhymed couplets are also commonly used as a key component of specific types of poems. For example, the type of sonnet known either as an English or Shakespearean sonnet typically ends with a rhymed couplet, even though the lines that precede the couplet have an alternating rhyme scheme.

Shall I compare thee to a summer’s day?
Thou art more lovely and more temperate:
Rough winds do shake the darling buds of May,
And summer’s lease hath all too short a date;
Sometime too hot the eye of heaven shines,
And often is his gold complexion dimm'd;
And every fair from fair sometime declines,
By chance or nature’s changing course untrimm'd;
But thy eternal summer shall not fade,
Nor lose possession of that fair thou ow’st;
Nor shall death brag thou wander’st in his shade,
When in eternal lines to time thou grow’st:
So long as men can breathe or eyes can see,
So long lives this, and this gives life to thee.

Notice how the final two lines are the only consecutive lines in the entire poem to rhyme; this is a clear example of a couplet within a longer stanza of formal verse.

I met the Bishop on the road
And much said he and I.
'Those breasts are flat and fallen now,
Those veins must soon be dry;
Live in a heavenly mansion,
Not in some foul sty.'

"Crazy Jane Talks with the Bishop" is a helpful example, because it is written in formal verse with the rhyme scheme ABCBDB. While the AB, CB, and DB couplets could each be considered an unrhymed couplet, the highlighted couplet most perfectly fits the bill because its two lines form their own sentence, while the CB and DB couplets are both part of the same overall sentence.

One last thing: there is some debate about whether unrhymed couplets can only exist in formal verse, or if they can also exist in blank verse (poetry with meter but no rhyme) or even free verse (poetry lacking rhyme and meter). For example, this is a stanza from "Her Lips Are Copper Wire" by Jean Toomer:

Even though this stanza is two lines long and the lines don't rhyme, the majority of poets would argue that it cannot be properly called an "unrhymed couplet" because the poem is written in free verse. These poets would argue that this stanza should simply be called a "couplet." It's worth knowing that there are some people who would argue, though, that any couplet lacking a rhyme should be called an unrhymed couplet.

In poems with ABAB (or ABCBDB, etc.) rhyme scheme, unrhymed couplets are a natural unit. However, it's important to look carefully at the logic of the poem's overall rhyme scheme when thinking about breaking it into couplets. For example, Percy Bysshe Shelley's famous "Ode to the West Wind" is written with alternating rhymes, but ones that would not be naturally broken into couplets. The first two stanzas have the rhyme scheme ABA BCB, which means that it makes more sense to break them into tercets than into couplets:

O wild West Wind, thou breath of Autumn's being,
Thou, from whose unseen presence the leaves dead
Are driven, like ghosts from an enchanter fleeing,

Yellow, and black, and pale, and hectic red,
Pestilence-stricken multitudes: O thou,
Who chariotest to their dark wintry bed

While it would be technically correct to refer to the first two lines of "Ode to the West Wind" as a couplet—and even an unrhymed couplet, since they share a meter—to actually do so would be unusual. Instead, it would make more sense to keep the tercet intact to give a sense that the rhyme scheme relies on units of three lines.

Likewise, in a stanza with a rhyme scheme of ABCABC, it would be odd to refer to the first two lines (AB) as a couplet, rather than to use the ABC tercet as the basic unit of the poem because that is the unit that repeats. The same would be true of a stanza with a more irregular rhyme scheme, such as ABBAB. Rather than referring to any of these two lines as a couplet, it would probably make more sense just to call the entire stanza a cinquain.

Couplets are also sometimes described as being "open" or "closed."

Why rove my thoughts beyond this last retreat?
Why feels my heart its long-forgotten heat?
Yet, yet I love!—From Abelard it came,
And Eloisa yet must kiss the name.

Chaucer popularized the heroic couplet (rhymed couplets in iambic pentameter) with his The Canterbury Tales, a long narrative poem for which this metrical pattern is well-suited.

In Oxford there once lived a rich old lout
Who had some guest rooms that he rented out,
And carpentry was this old fellow's trade.
A poor young scholar boarded who had made
His studies in the liberal arts, but he
Had turned his fancy to astrology
And knew the way, by certain propositions,
To answer well when asked about conditions,
Such as when men would ask in certain hours
If they should be expecting drought or showers,
Or if they asked him what was to befall
Concerning such I can't recount it all.

Alexander Pope's "Elegy to the Memory of an Unfortunate Lady"

Alexander Pope was an 18th century English poet, also known for writing in heroic couplets—as in the elegy below.

What beck'ning ghost, along the moon-light shade
Invites my steps, and points to yonder glade?
'Tis she!—but why that bleeding bosom gor'd,
Why dimly gleams the visionary sword?
Oh ever beauteous, ever friendly! tell,
Is it, in heav'n, a crime to love too well?
To bear too tender, or too firm a heart,
To act a lover's or a Roman's part?
Is there no bright reversion in the sky,
For those who greatly think, or bravely die?

Couplets in Ben Jonson's "The Gut"

This short poem by Jonson is an epigram consisting of two unrhymed couplets in an ABAB rhyme scheme and one rhymed couplet. However, because there are not double line breaks in this single-stanza poem, it would also be accurate to describe the poem not as a set of three couplets, but as a single sestet, or stanza of six lines.

Gut eats all day and lechers all the night;
So all his meat he tasteth over twice;
And, striving so to double his delight,
He makes himself a thoroughfare of vice.
Thus in his belly can he change a sin:
Lust it comes out, that gluttony went in.

Each of these poems consists of a single, open heroic couplet.

Let me not thirst with this Hock at my Lip,
Nor beg, with domains in my pocket—

Max Ritvo's "Your Voice in the Chemo Room"

Here is an example of a contemporary poem written nearly entirely in couplets of free verse by the poet Max Ritvo. Because this is free verse, with no meter and no rhyme scheme, the couplets are defined by physical line breaks between them. The first four stanzas of the poem are shown here:

There is a white stone cliff over a dropping slope
sliced along with bare trees.

In the center of the cliff is a round dry fountain
of polished stone. By seizing my whole body up

as I clench my hand I am able to open
the fountain into a drain, revealing below it

the sky, the trees, a brown and uncertain ground.
This is how my heart works, you see?

Why Do Writers Use Couplets?

Generally speaking, stanzas are used, much like paragraphs in prose, to group related ideas inside a poem into units of the right size. It follows, then, that couplets (being a shorter type of stanza) are generally used to create images or express ideas that are not exceedingly long or complex. The nature of rhymed couplets, in particular, makes them well-suited to narrative poems, since rhymes that are completed in the next line after they're introduced (as opposed to two or more lines later) make the stories easier to understand and listen to.

Shorter stanzas like couplets, when they're separated by double line breaks, also have an effect on the pacing of a poem. By inserting more white space into the poem, the natural instinct of the reader is to slow down while reading, and to read each line with more deliberateness. In this way, couplets can enable the poet to draw more attention to each line that they write—a particularly useful technique for restrained writing styles in which great care is taken with the details of the language, as is usually the case with poetry. 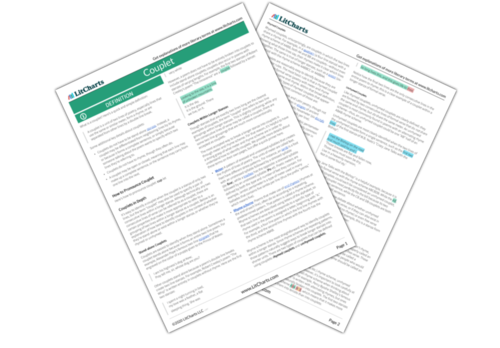