What is deus ex machina? Here’s a quick and simple definition:

A deus ex machina is a plot device whereby an unsolvable conflict or point of tension is suddenly resolved by the unexpected appearance of an implausible character, object, action, ability, or event. For example, if a character fell off a cliff and a flying robot suddenly appeared out of nowhere to catch them, that would be a deus ex machina. The goal of this device is to bring about resolution, but it can also introduce comedic relief, disentangle a plot, or surprise an audience.

When a writer uses deus ex machina, the story's resolution comes from the unexpected introduction of a brand new element, rather than from the facts and circumstances that have already been established. Because of this, use of the device is controversial. Some people think that deus ex machina is always evidence of authorial laziness, or that its use should be strictly avoided because deus ex machina makes a story feel hokey or contrived. Others, however, argue that, while deus ex machina can certainly be used badly, there are some circumstances in which the use of the device is appropriate. Below, we give a brief overview of both points of view.

Many people use the term deus ex machina disparagingly and argue that to use the device is always a marker of laziness or incoherence. Criticisms of the device fall into two main categories:

In Defense of Deus Ex Machina

While deus ex machina carries an unequivocally negative connotation for many people, others argue that the device can be used in situations in which the author has carefully considered its effect. Not everyone will agree on when deus ex machina is appropriate and when it isn't; examples that some people consider to be thoughtful and deliberate, others believe to be lazy and absurd. But it's important to note that people often argue in favor of the device. Here are two examples of instances in which the use of deus ex machina is arguably both deliberate and appropriate.

Deus Ex Machina in Lord of the Flies

In his novel Lord of the Flies, William Golding uses deus ex machina to wrap up his dystopian story of a group of British boys who, while marooned on a deserted island, have descended into chaos, paranoia, and violence. At the moment in which the novel's protagonist is about to be killed by a rival faction of boys, a naval officer arrives, along with his fleet, as a deus ex machina to return the boys to civilization. Some people argue that this use of deus ex machina is appropriate for two reasons:

A deus ex machina can also be used to intentionally disrupt an audience's sense of what's fiction and what's reality, or to parody the conventions of a genre in which implausible resolutions are the norm. One such genre is superhero movies—a fact of which the creators of the 1966 film Batman seemed well aware. The film parodies the deus ex machina device by showing Batman overusing his conspicuously convenient gadgets to the extent that they begin to seem absurd. For example, in one scene Batman is being attacked by a shark and he calls for Robin to bring him his handy shark repellent, which makes the shark explode. It's a hopeless situation, and without some incredible intervention—like the sudden appearance of heretofore unmentioned shark repellent—Batman would not have been able to survive. Thus, this self-aware use of deus ex machina is defensible in that it's used to parody the lazy plots of other superhero movies.

In sum, there's no easy answer to whether deus ex machina is a scourge on storytelling, or a device that (while perhaps often abused) can be used to powerful effect. Regardless of your personal opinion on the device, though, it's helpful to know that no single opinion is definitive or "correct."

The rule of thumb for plot twists in literature is that a reader should be surprised, but shouldn't say, "I don't believe it." According to convention, the action and characters should make the story's world feel completely real. Even so, some books—even highly-acclaimed novels—break free of that expectation for a specific effect.

Deus Ex Machina in Philip Roth's The Plot Against America

Philip Roth's novel The Plot Against America imagines what would have happened if Franklin D. Roosevelt had lost the 1940 American presidential election to Charles Lindbergh. In the world of the novel, antisemitism becomes more accepted after Lindbergh's election and Jewish families like Roth's are persecuted. The state of Jewish oppression escalates and, as a result, many Americans live in fear. However, instead of imagining a Lindbergh presidency continuing into utter catastrophe, Roth writes a deus ex machina in which Lindbergh's plane goes missing, and former president Roosevelt runs again as an emergency presidential candidate. While this sudden turn of events helps the novel to realign with the actual facts of history (Roosevelt as the President) and resolves the novel's many imminent catastrophes, it isn't necessarily a happy ending. Though he uses a deus ex machina resolution, Roth has already shown readers how quickly and frighteningly American politics can turn toward evil. Roosevelt, then, comes across as a temporary solution to a lurking problem, allowing the book's ending to remain foreboding.

Poe opens his short story, "The Pit and the Pendulum," with an unnamed narrator condemned of committing heresy against the Catholic Church, and then imprisoned and put through terrible psychological and physical torture by shadowy representatives of the Spanish Inquisition. Just as it seems that his death is imminent, though, a French general, who has seized the prison from the Spanish, saves him. This abrupt aid allows the narrator to live and tell the story, so Poe's deus ex machina resolution is a necessary narrative trick. In addition, it has thematic resonance: the protagonist is propelled by reason, not faith, and he ultimately isn't saved by someone from the Church, but rather by an outsider. Thus, the deus ex machina in this story—though it evokes divine intervention—suggests that reason, not belief in God or the Church, is man's only true salvation.

Deus ex machina appears often in ancient Greek plays. Its most notable user was Euripides, who most scholars believe pioneered the device. For the Greeks, deus ex machina was not an easy solution to a plot problem, nor an attempt to surprise and entertain the audience; deus ex machina, to Greek playwrights, was a device useful for imparting moral lessons. While contemporary readers might not find the resolutions to certain Greek plays "realistic," these endings were intended to suggest divine criticism, approval, or insight into mankind's actions. In other words, the plays were not supposed to be merely entertainment or a perfect reflection of human reality—they were also religious or moral commentaries in which the gods intervened at the end to teach humans a lesson. Here are a few examples of deus ex machina in ancient Greek drama.

The Oresteia is a trilogy of plays by Aeschylus that tell the story of the cursed House of Atreus, a royal family marred by its long and convoluted history of internal betrayals and honor killings. In the final play of the trilogy, the protagonist—who has just murdered his mother in revenge for a murder she had previously committed—is about to become the victim of yet another familial honor killing himself. Instead, the god Apollo arrives to save him, declaring an end to the generations-long bloodbath that has plagued the family. Apollo announces that the family drama will be resolved through a trial by jury—the first of its kind—and the god's intervention thereby abolishes a tribalistic concept of justice (based on honor and revenge) and establishes instead a concept of justice based on reason and evidence. The arrival of Apollo is a deus ex machina, but it serves a critical function in drawing together the themes of the three plays into one very clear moral principle.

Medea tells the story of a woman who is determined to take revenge on her unfaithful husband. To inflict maximum pain, Medea murders the children she and her husband had together, as well as her husband's new fiancée. As soon as Medea's husband discovers what she has done, a golden chariot appears, and she rides away with the corpses of her children. When it was originally performed, the chariot—the play's deus ex machina—was lowered onto the stage using the crane typically reserved for the entrances of gods and goddesses. Thus, instead of using the ending to punish Medea for her crimes (as other ancient Greek plays might have), Euripides uses a deus ex machina to make her seem divine. Many critics read this sympathetic deus ex machina resolution as a feminist examination of being a woman in a patriarchal society.

As Deus ex machina is an improbable solution to an thorny problem, the device is commonly found in films that already have a fantasy element, such as superhero films. However, deus ex machina can be found in all types of film.

Deus Ex Machina in The Wizard of Oz

A classic example of deus ex machina is the "it was all a dream" ending, wherein a writer reveals at the end of a narrative that the events didn't actually take place—or at least not quite as they were described. After Dorothy's adventures in The Wizard of Oz, she wakes up in her bed at home. Although she insists her adventures are real, her family says she hit her head and it was all a dream. Even though the film was fantastical—with talking lions and scarecrows—it was otherwise consistent, so this rather ordinary explanation feels completely unexpected. While this is a widely-celebrated film, many critics say that the ending feels gimmicky. You can watch the ending here.

Animated shows and films often use deus ex machina for a comedic effect. In The Emperor's New Groove, the protagonists are being chased by the antagonists across a mountain. Just as the protagonists seem as though they will be overtaken, the antagonists are struck by lightning and fall off a cliff. It's entirely implausible that a lightning bolt would strike these pursuers on an otherwise sunny day, but it's the moment's ridiculousness that makes it funny. You can watch the scene here.

What's the Function of Deus Ex Machina in Literature?

While deus ex machina originated in ancient Greek plays, usually to imbue the work with spiritual and moral importance, the plot device has been expanded to serve many other purposes and functions: 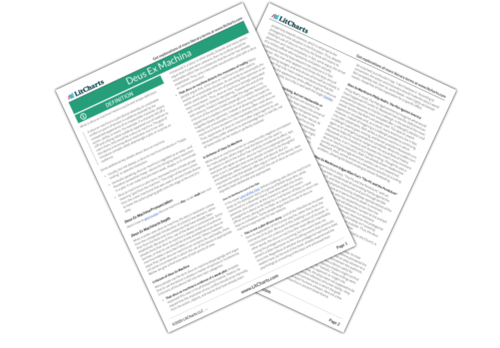