What is an acrostic? Here’s a quick and simple definition:

An acrostic is a piece of writing in which a particular set of letters—typically the first letter of each line, word, or paragraph—spells out a word or phrase with special significance to the text. Acrostics are most commonly written as a form of poetry, but they can also be found in prose or used as word puzzles.

Some additional key details about acrostics:

Here's how to pronounce acrostic: uh-krahss-tik

Roses are red,
Oranges yummy,
Sugar's a sweet,
Elixir in my tummy.

But other types of acrostic, with more specialized locations of the letters that spell out the word or phrase, do have special names:

In addition to these named forms, acrostics can be non-standard. For example, some acrostics spell out words using neither the first nor last letters of a line, but rather by emphasizing letters in different places.

Roses are red,
Violets are blue,
Sugar is sweet,
And so are you.

The level of difficulty in decoding the hidden message of an acrostic varies widely, and that difficulty depends on how carefully the author has hidden it or, conversely, how deliberately he or she has revealed it. In many cases, it's easy to recognize the word being spelled in the acrostic because the important letters are capitalized or bolded and they fall at the beginning of each line. In other cases, the author may have intended for the acrostic to be harder to solve, leading them to insert the important letters more subtly by embedding them somewhere other than the first word of each line or leaving the letters lower-case. Put another way: an acrostic may be a show, in which the author wants you to see it at once, or a puzzle that the author is content to have some people find and other's not.

Acrostics are in some ways similar to acronyms, in that both involve the isolation of individual letters to make a new word. Just as a poem might form the acrostich "Rose" from the first letters of its four lines, so is the acronym POTUS made by taking the first letters of "President of the United States." However, acrostics and acronyms are not the same, for two reasons:

The earliest examples of acrostics can be found in the Hebrew Bible. Several passages in the book of Psalms begin with letters of the alphabet, forming an abecedarian acrostic (an acrostic that spells out the entire alphabet). The first examples of non-abecedarian acrostics come from ancient Greece, where the Erythraean Sybil (an oracle from the ancient Greek town of Erythrae) was known to write her prophesies on leaves and arrange them so that the first letters would spell out a word. Later, acrostics were commonly used in medieval literature to encode a secret message—for example, to disclose the name of the poet or the name of the poem's subject, especially in cases where the subject of the poem was a secret lover. Today, however, acrostics have lost some of the literary prestige they once enjoyed in the past. Instead, they are now often considered to be juvenile, or useful primarily as a comedic form.

In the examples below, the letters that form the acrostich (the acrostic's hidden message) are bold.

This poem by Lewis Carroll spells out the names of three sisters: Lorina, Alice, and Edith. Alice was purportedly the real-life inspiration for Carroll's book Alice's Adventures in Wonderland.

Little maidens, when you look
On this little story-book,
Reading with attentive eye
Its enticing history,
Never think that hours of play
Are your only HOLIDAY,
And that in a HOUSE of joy
Lessons serve but to annoy:
If in any HOUSE you find
Children of a gentle mind,
Each the others pleasing ever—
Each the others vexing never—
Daily work and pastime daily
In their order taking gaily—
Then be very sure that they
Have a life of HOLIDAY.

Acrostic in Nabokov's "The Vane Sisters"

While acrostics are most often found in poetry, Vladimir Nabokov's short story "The Vane Sisters" contains an example of an acrostic formed with prose. In "The Vane Sisters," a short story which is about a professor who becomes fascinated with acrostics, the first letters of each word in the story's final paragraph spell out the phrase, "Icicles by Cynthia; Meter from me, Sybil." While these words may seem like nonsense if you haven't read the story, they are, in fact, key to interpreting the story's mysterious plot.

Commonly referred to as "Chaucer's ABC's," this poem is an example of the sub-genre of acrostic known as abecedarian poetry, in which the first letters of each stanza spell the alphabet in sequence.

ALMIGHTY and all-merciable Queen,
To whom all this world fleeth for succour...

Bounty so fix'd hath in thy heart his tent,
That well I wot thou wilt my succour be...

Comfort is none, but in you, Lady dear!
For lo! my sin and my confusion...

This poem by William Blake puts a special emphasis on the sounds of London's cityscape, such as the cries of the chimneysweeps and the sighs of the soldiers. In the third stanza, the initial letters of each line form an acrostic that spells the word "HEAR," which underscores the speaker's fixation on the sounds in his environment. This is an example of acrostic being used in just one stanza of a poem—the remainder of the poem does not contain acrostics.

How the Chimney-sweepers cry
Every blackning Church appalls,
And the hapless Soldiers sigh
Runs in blood down Palace walls

Acrostic in Cage's "Overpopulation and Art"

John Cage was a hugely influential experimental composer and poet who, toward the end of his life, became interested in writing acrostic poems in which the key letters were placed in the middles of lines instead of at the beginnings—a form known as mesostich poetry. The following excerpt is the beginning of one of the last poems Cage wrote in his lifetime, "Overpopulation and Art." The long mesostich poem, written in free verse, spells out the words of the title, "overpopulation and art," twenty times (the number of letters in the title). The excerpt below shows just one of the twenty cycles of the poem.

abOut 1948 or 50 the number of people
liVing
all at oncE
equaled the numbeR who had ever lived at any time all added together
the Present as far as numbers
gO
became equal to the Past
we are now in the fUture
it is something eLse
hAs
iT doubled
has It quadrupled
all we nOw
kNow for sure is
the deAd
are iN the minority
they are outnumbereD by us who're living
whAt does this do to
ouR
way of communicaTing...

Why Do Writers Choose to Write Acrostics?

Acrostics are used to add new dimension to a poem or other text. They can transform straightforward poetry or prose into a word puzzle by enlisting the reader to decode a secret message. In addition, acrostics are often used to spell out names or meanings that are associated with the text but that have not been said outright—this can be used for comedic effect, to tell a secret, or to give supplemental information. Acrostics can also make poems easier to remember or memorize, as their messages can function as mnemonic devices that help a reader to recall the remainder of each line. For this reason, acrostics are commonly used in children's poetry. 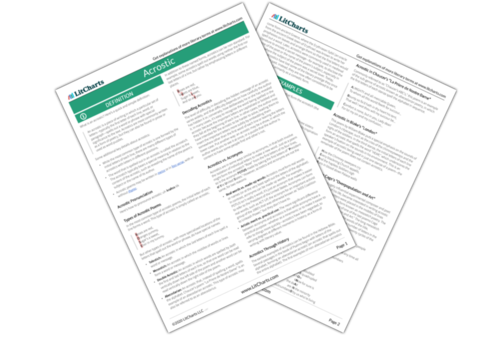