What is asyndeton? Here’s a quick and simple definition:

An asyndeton (sometimes called asyndetism) is a figure of speech in which coordinating conjunctions—words such as "and", "or", and "but" that join other words or clauses in a sentence into relationships of equal importance—are omitted. The use of asyndeton can speed up the rhythm of a phrase, make it more memorable or urgent, or offer other stylistic effects. For instance, take the sentence: "I expect my dog to chew my pillows, my cat to claw my furniture." Here, the writer omits the "and" from between "pillows" and "my". This omission transforms the sentence from one that merely states what the pets often do, to one that implies exasperation as well as a fatalistic sense that the pets' actions are inevitable and unchangeable.

Some additional key details about asyndeton:

Here's how to pronounce asyndeton: uh-sin-di-tahn

A Primer on Coordinating Conjunctions and Asyndeton

To more fully understand asyndeton, it's helpful to understand the basics of what coordinating conjunctions are. To put it simply, conjunctions in general are words that join parts of a sentence and, in joining them, define a relationship between those parts. Those relationships can be equal or unequal:

Asyndeton is related to two other concepts that have to do with how many conjunctions are used to coordinate the words or clauses of a sentence.

Syndeton refers to sentences that have a single conjunction between the parts of the sentence being joined. The example included above—"Deftly and lightly, he entered the dark house undetected."—is an example of syndeton. Put another away, syndeton is how conjunctions are normally handled, and asyndeton and polysyndeton are departures from that normal construction.

The prefix "poly" means "much" or "many," and polysyndeton means that multiple conjunctions are present in close succession. An excellent example appears in Herman Melville's Moby-Dick:

There was a low rumbling of heavy sea-boots among the benches, and a still slighter shuffling of women's shoes, and all was quiet again, and every eye on the preacher.

Polysyndeton is essentially the opposite of asyndeton, as it involves the inclusion of more than the expected number of conjunctions while asyndeton involves the omission of conjunctions. Polysyndeton can achieve some of the same effects of emphasis as asyndeton can, but are also unique in their ability to make a reader feel overwhelmed. In this example Melville evokes many simultaneous sensations and the hubbub of people coming into a church, which are all contending for the attention of the narrator.

Parataxis is another figure of speech that is somewhat related to asyndeton. The word parataxis comes from the Greek, and means the "act of placing side by side." In parataxis, short, simple, independent sentences or phrases are placed one after another. Here's an example from the opening lines of Samuel Becket's novel Molloy:

I am in my mother's room. It is I who live there now. I don't know how I got there.

So what, then, is the relationship between parataxis and asyndeton? The two can sometimes overlap. For example, take Julius Caesar's famous quote:

I came, I saw, I conquered.

This phrase is an example of asyndeton because you could read it as the result of omitting the word "and" from the sentence "I came, and I saw, and I conquered." But because the statement can also be seen as the placing of independent sentences or clauses ("I came." "I saw." "I conquered.") next to each other without coordinating conjunctions, it's also parataxis.

However, while asyndeton and parataxis can overlap, they don't always overlap. Not all asyndeton is parataxis, and not all parataxis is asyndeton. The example from Molloy just above is not asyndeton, while the sentence "I expect my dog to chew my pillows, my cat to claw my furniture" is asyndeton but not parataxis.

Asyndeton appears frequently in everyday speech as an unconscious habit, but it is also often used purposefully by writers as well as by speech writers and orators for stylistic effect.

Examples of Asyndeton in Literature

Because asyndeton is a common habit of everyday speech, writers often use it to create realistic dialects for their characters. It can also be used to exhaust an idea or feeling with a long, extensive list. Sometimes the omission of a conjunction can make such a list appear to never end, so the reader might imagine what comes next. Because asyndeton, through the omission of an expected conjunction can disrupt the normal pattern of syntax in a text, writers sometimes use asyndeton to grab the reader's attention and to put focus on particular words or ideas.

Asyndeton in William Faulkner's The Hamlet

In this example from William Faulkner's novel The Hamlet, asyndeton and and polysyndeton appear in the same sentence:

He did not still feel weak, he was merely luxuriating in that supremely gutful lassitude of convalescence in which time, hurry, doing, did not exist, the accumulating seconds and minutes and hours to which in its well state the body's slave both waking and sleeping, now reversed and time now the lip-server and mendicant to the body's pleasure instead of the body thrall to time's headlong course.

Faulkner was known for his literary experimentation and attention to the diction of his characters. He spent a great deal of time developing unique cadences for the dialogue of his characters and each work's narrative voice. So it comes as no surprise that one would find asyndetons throughout his work. This example, in his novel The Hamlet, slows down the reading of the text. The quick succession of descriptions of a slow healing process gives the reader little room to take a breath or break, which furthers the sensation of this character's immersive sluggishness.

In this example from Thomas Wolfe's novel Look Homeward, Angel, the use of asyndeton makes the text dramatic:

O waste of lost, in the hot mazes, lost, among bright stars on this weary, unbright cinder, lost! Remembering speechlessly we seek the great forgotten language, the lost land—end into heaven, a stone, a leaf, an unfound door. Where? When?

Wolfe wrote hyper-analytic novels that contained long, complex sentences. Similar to Faulkner, those sentences could sometimes comprise an entire page, or more. The use of asyndeton in this excerpt gives the language a musical quality, so it can be read almost like poetry. This effect wouldn't be achieved as successfully if an "and" were inserted before "an unfound door." Additionally, all elements in this series are referring to things humanity has forgotten but unconsciously seeks to find. By omitting the "and", Wolfe puts all of these elements on the same level of importance. He isn't saying we seek these things individually and at separate moments. He is saying we seek all of them at once and with equal effort, so a "great forgotten language" is just as important as "a stone." By using asyndeton Wolfe is telling his readers something about the human condition: the big mysteries of life are just as important as small, everyday objects.

In the concise sentence below, from Toni Morrison's Beloved, the asyndeton involves omitting a "but" rather than the more typical omission of an "and."

Definitions belong to the definers, not the defined.

Morrison often punctuates longer descriptions with leaner lines like this example, which add clarity and emphasis on a particular point. By here inserting a simple sentence that also uses asyndeton, Morrison makes the line seem extra important. Moreover, omitting the word "but" after the comma mirrors the way people talk, so readers can imagine this line actually being spoken—firmly and with conviction.

Examples of Asyndeton in Speeches

The omission of a conjunction focuses attention on certain words and phrases, but it also mirrors the way people sometimes speak using everyday language. So a speechwriter might employ asyndeton to make an orator appear simultaneously natural and powerful, thus making his or her delivery both accessible and emphatic.

To speak for labor; to plead the cause of the men and women and children who toil; to serve the working class, has always been to me a high privilege; a duty of love.

For one thing, the sentence contains more drama without the "and" conjunctions you might normally expect between the clauses. By leaving out the conjunction, Debs, a famous labor leader, also eliminates any hierarchy among these actions. Instead, he makes them equal, makes clear that they are one and the same to him. In doing so, he avoids creating a tired old list, and instead urgently communicates his ideals.

Barack Obama's presidency was defined by his meticulously crafted speeches, and many of these are filled with examples of asyndetism. The following appears toward the end of his eulogy for nine slain parishioners in Charleston, South Carolina:

It would be a refutation of the forgiveness expressed by those families if we merely slipped into old habits whereby those who disagree with us are not merely wrong, but bad; where we shout instead of listen; where we barricade ourselves behind preconceived notions or well-practiced cynicism.

Obama's repetition of "where we," without a conjunction, puts direct emphasis on the "we," as he aims to unify people after a national tragedy.

Abraham Lincoln wrote some of the greatest speeches ever given by an American President, and he was no slouch when it came to asyndeton either. The most famous line from his most famous speech, the Gettysburg Address, depends on asyndeton:

In this example the writer, George Saunders, uses asyndeton as he speaks to a crowd of graduating college students:

Do those things that incline you toward the big questions, and avoid the things that would reduce you and make you trivial. That luminous part of you that exists beyond personality—your soul, if you will—is as bright and shining as any that has ever been. Bright as Shakespeare’s, bright as Gandhi’s, bright as Mother Teresa’s. Clear away everything that keeps you separate from this secret luminous place. Believe it exists, come to know it better, nurture it, share its fruits tirelessly.

In the line "Bright as Shakespeare’s, bright as Gandhi’s, bright as Mother Teresa’s" Saunders accelerates the rhythm in his speech by omitting the "and" as he compares the students' potential to that of important, well-known cultural figures. This passage occurs toward the end of the speech, when an orator in this context might want to close on an uplifting note, and shows how asyndeton can establish such a tone. In the final line, Saunders issues a riveting call for action that also relies on asyndeton. There is great energy and excitement here because Saunders chooses to not interrupt the series of commands with a conjunction.

Why Do Writers Use Asyndeton?

Writer's use asyndeton for a variety of different effects and purposes, depending upon the context for publication or oration. The more common reasons include:

Check out these resources on other sites for even more information about asyndeton. 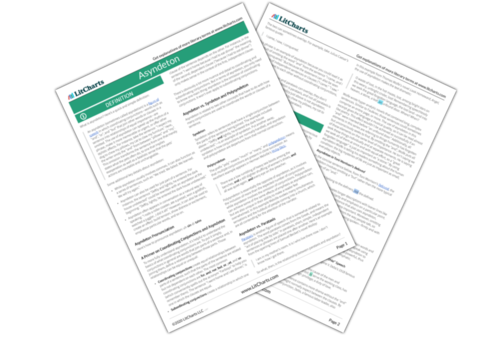