What is apostrophe? Here’s a quick and simple definition:

Apostrophe is a figure of speech in which a speaker directly addresses someone (or something) that is not present or cannot respond in reality. The entity being addressed can be an absent, dead, or imaginary person, but it can also be an inanimate object (like stars or the ocean), an abstract idea (like love or fate), or a being (such as a Muse or god).

Some additional key details about apostrophe:

Here's how to pronounce apostrophe: uh-poss-truh-fee

Apostrophe often involves the speaker or writer addressing an inanimate object or abstract idea. In doing so, the speaker or writer will often impart to the object human characteristics. The object, in other words, gets personified. Take these two lines from William Wordsworth's "Prelude":

There was a Boy: ye knew him well, ye cliffs
And islands of Winander!

However, though apostrophe often involves personification of inanimate objects or abstract ideas, it certainly doesn't always. For instance, in the example below from the end of James Joyce's novel A Portrait of the Artist as a Young Man, Joyce has his main character Stephen Dedalus address "Life," but without ascribing any human qualities to it:

Amen. So be it. Welcome, O life! I go to encounter for the millionth time the reality of experience and to forge in the smithy of my soul the uncreated conscience of my race.

Here Stephen simply addresses life as it is, as something to be experienced, and not as something that itself has experiences, or feelings, or acts in any other way like a human.

It's worth knowing that there is some debate among scholars about exactly what does and doesn't count as apostrophe. These debates, like lots of scholarly debates, can be a bit technical. But knowing the basics of the debates can help you understand apostrophe, and can also help you understand why some definitions of apostrophe on the Internet seem to define it in different ways.

Though everyone agrees that apostrophe is a form of address to a silent listener, some scholars insist that apostrophe must involve what they call an "aversion," a turning away from an original audience to then address the subject of the apostrophe. This way of thinking about apostrophe is based in theater, where a character onstage would literally turn away from the other characters when issuing an apostrophe. For example, in the induction of Shakespeare's The Taming of the Shrew, the Lord is speaking to his huntsmen then suddenly he breaks off to exclaim:

"Grim death, how foul and loathsome is thine image!"

Most scholars, though, define apostrophe more broadly as being any "exclamation," or impassioned outcry, in which a speaker directly addresses an absent or silent object directly. For instance, many poems that address people or inanimate objects begin and end with their subject—they don't turn to their subject from something else, because they only ever address that one subject. Percy Bysshe Shelley's "Ode to the West Wind" is an example: it begins with the line: "O wild West Wind, thou breath of Autumn's being!" and then continues to address the West Wind for the entirety of the 70 line poem.

There is also some debate about whether all direct addresses from a writer to that writer's audience, sometimes known as "authorial intrusion," counts as a form of apostrophe. For instance, the novel Jane Eyre famously ends with a line in which Jane, who has narrated the entire story, suddenly directly addresses her audience to say: "Reader, I married him."

However, while the speaker (Jane) is here breaking off from her narration to directly address the reader, most scholars agree that this sort of authorial intrusion is not apostrophe. The reason is that apostrophe does not only address itself to a silent or absent entity—it must address a specific entity. Beaudelaire's poem "To The Reader" may therefore be considered an example of apostrophe, because Beaudelaire describes the reader and makes him come to life, addressing him directly at the end:

There's one more damned than all. He never gambols,
Nor crawls, nor roars, but, from the rest withdrawn,
Gladly of this whole earth would make a shambles
And swallow up existence with a yawn...

Boredom! He smokes his hookah, while he dreams
Of gibbets, weeping tears he cannot smother.
You know this dainty monster, too, it seems —
Hypocrite reader! — You! — My twin! — My brother!

Apostrophe in Elegies, Odes, and Other Poetic Forms

A number of poetic forms are closely associated with apostrophes, such that these sorts of poems, more often than not, contain apostrophe. Elegy and ode, two common poetic forms both make frequent use of apostrophe. An elegy, a poem written to commemorate a person who has died, sometimes addresses that person directly, or laments the death to other people, to nature, or to god. In "Elegy for Jane," Roethke addresses Jane directly in the last stanza:

If only I could nudge you from this sleep
My maimed darling, my skittery pigeon.

An ode, like an elegy, usually praises and describes its subject, as in Keats' "Ode to a Nightingale," in which he addresses his subject directly, from his opening line:

Thou wast not made for death, immortal Bird!

In addition, poems that contain an envoi, a short concluding stanza found particularly in ballades and sestinas, often contain apostrophe. The envoi regularly (though certainly not always) serves as a dedication to a patron, beloved, or muse, and these dedications often take the form of an apostrophe.

Examples of Apostrophe in Literature

Apostrophe is found throughout literature: it appears in poetry, prose, and drama, and across all eras from ancient Greek epic poetry through modern times.

Apostrophe in The Odyssey

One of the earliest and most famous examples of apostrophe in literature comes from Homer, who begins both The Iliad and The Odyssey with an invocation of the Muse.The Odyssey begins with the following lines, which ask the Muse, a goddess of the arts, to help the author in his work:

Sing in me, Muse, and through me tell the story
of that man skilled in all ways of contending,
the wanderer, harried for years on end,
after he plundered the stronghold
on the proud height of Troy.

Apostrophe pops up all over the place in Shakespeare, as his characters often address abstract ideas or inanimate objects while onstage. In Macbeth, while Macbeth is struggling with whether to follow through with a planned murder, he sees an apparition of a dagger and addresses it:

Is this a dagger which I see before me,
The handle toward my hand? Come, let me clutch thee.
I have thee not, and yet I see thee still.
Art thou not, fatal vision, sensible
To feeling as to sight?

Apostrophe in Keats' "Ode on a Grecian Urn"

The works of Romantic poets of the nineteenth century, who were steeped in Greek poetry and myth, are also filled with apostrophe. Several of John Keats' odes, in particular, address their subjects directly. In "Ode on a Grecian Urn," Keats speaks to a beautiful ancient vase, addressing it as a bride, a child, and a historian, and also as a kind of Muse, who, if it could speak, would write more eloquently than Keats himself:

Thou still unravish'd bride of quietness,
Thou foster-child of silence and slow time,
Sylvan historian, who canst thus express
A flowery tale more sweetly than our rhyme

Apostrophe in Woolf's The Waves

The modernist writer Virginia Woolf, who wrote in the early 20th century, also regularly used apostrophe in as part of the "stream of consciousness" that she often created for her characters. Here, in Woolf's The Waves, one character, Rhoda, cries out in anger to "human beings":

What dissolution of the soul you demanded in order to get through one day, what lies, bowings, scrapings, fluency and servility! How you chained me to one spot, one hour, one chair, and sat yourselves down opposite!

Examples of Apostrophe in Song Lyrics

Many different genres of music make use of apostrophe, as it creates a direct emotional attachment between the singer and his or her subject.

Apostrophe in "Do You Remember Walter?" by the Kinks

Here are the Kinks, a pop band, singing to an old friend:

Walter, remember when the world was young and all the girls knew Walter's name?
Walter, isn't it a shame the way our little world has changed.
Do you remember Walter playing cricket in the thunder and the rain?
Do you remember Walter smoking cigarettes behind your garden gate?
Yes, Walter was my mate.
But Walter, my old friend, where are you now?

Apostrophe in "I'll Be Missing You" by Puffy

Here is the rapper Sean Combs, known as Puffy, in "I'll Be Missing You," an elegy for his friend Biggie Smalls:

I saw your son today, he look just like you
You was the greatest, you'll always be the greatest
I miss you B.I.G
Can't wait til that day, when I see your face again

Apostrophe in "The Banks O' Doon" by Robert Burns

In an old Scottish folk song whose lyrics were composed by Robert Burns, the speaker addresses a river called Doon:

Apostrophe in "Princess Leia" by Blink 182

Here the punk band Blink 182 sings to a girl, who seems to be more of a fantasy girl than a real person, and whom they call Princess Leia:

Princess Leia, where are you tonight?
And who's laying there by your side?
Every night I fall asleep with you
And I wake up alone

Why Do Writers Use Apostrophe?

Apostrophe is used primarily to express strong emotion (like love, hate, fear, or anger), but it allows the speaker or writer to do so by directly addressing the subject of their thoughts or feelings, which makes the expression less abstract. Speakers or characters may use apostrophe to make an impassioned plea or prayer, to celebrate a happy occasion, or to lament a loss. The device creates a heightened emotional atmosphere in a literary work, often forming a peak in a given scene.

Apostrophe can also serve a similar purpose as monologue or soliloquy, which gives deeper insight into a character's thoughts and feelings, and can also reveal a character's inner conflict. The sincerity and directness that is inherent in apostrophe's second person address can give a reader a sense of intimacy with the character, and can help to establish an empathetic relationship between the speaker/writer and the audience. 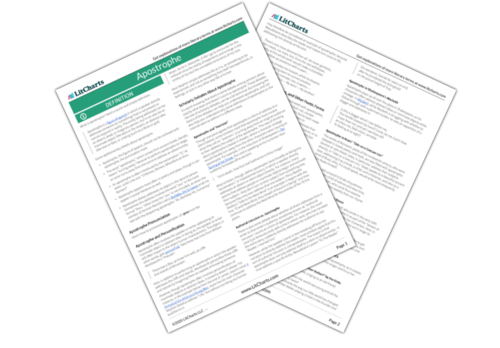