What is imagery? Here’s a quick and simple definition:

Imagery, in any sort of writing, refers to descriptive language that engages the human senses. For instance, the following lines from Robert Frost's poem "After Apple-Picking" contain imagery that engages the senses of touch, movement, and hearing: "I feel the ladder sway as the boughs bend. / And I keep hearing from the cellar bin / The rumbling sound / Of load on load of apples coming in."

Some additional key details about imagery:

Here's how to pronounce imagery: im-ij-ree

There are five main types of imagery, each related to one of the human senses:

Some people may also argue that imagery can be kinesthetic (related to movement) or organic (related to sensations within the body). Writers may focus descriptions in a particular passage on primarily one type of imagery, or multiple types of imagery.

Many people (and websites) confuse the relationship between imagery and figurative language. Usually this confusion involves one of two things:

A Quick Definition of Figurative Language

Figurative language is language that creates a meaning that is different from the literal interpretation of the words. For instance, the phrase "you are my sunshine" is figurative language (a metaphor, to be precise). It's not literally saying that you are a beam of light from the sun, but rather is creating an association between "you" and "sunshine" to say that you make the speaker feel warm and happy and also give the speaker life in the same way sunshine does.

Imagery can be Literal or Figurative

I feel the ladder sway as the boughs bend.
And I keep hearing from the cellar bin
The rumbling sound
Of load on load of apples coming in.

These lines contain powerful imagery: you can feel the swaying ladder, see the bending boughs, and hear the rumbling of the apples going into the cellar bin. But it is also completely literal: every word means exactly what it typically means. So this imagery involves no figurative language at all.

Now, that doesn't mean imagery can't use figurative language. It can! You could write, for instance, "The apples rumbled into the cellar bin like a stampede of buffalo," using a simile to create a non-literal comparison that emphasizes just how loudly those apples were rumbling. To sum up, then: imagery can involve the use of figurative language, but it doesn't have to.

Imagery is found in all sorts of writing, from fiction to non-fiction to poetry to drama to essays.

Example of Imagery in Romeo and Juliet

In Shakespeare's Romeo and Juliet, Romeo describes his first sight of Juliet with rich visual imagery:

O, she doth teach the torches to burn bright!
Her beauty hangs upon the cheek of night,
Like a rich jewel in an Ethiop's ear

This imagery does involve the use of figurative language, as Romeo describes Juliet's beauty in the nighttime by using a simile that compares her to a jewel shining against dark skin.

Example of Imagery in "Birches"

In the early lines of his poem "Birches," Robert Frost describes the birches that give his poem it's title. The language he uses in the description involves imagery of sight, movement, and sound.

When I see birches bend to left and right
Across the lines of straighter darker trees,
I like to think some boy's been swinging them.
But swinging doesn't bend them down to stay
As ice-storms do. Often you must have seen them
Loaded with ice a sunny winter morning
After a rain. They click upon themselves
As the breeze rises, and turn many-colored
As the stir cracks and crazes their enamel.

Example of Imagery in The Road

The novelist Cormac McCarthy is known, among other things, for his powerful imagery. In this passage from his novel The Road, note how he uses imagery to describe the fire on the distant ridge, the feel of the air, and even the feeling inside that the man experiences.

A forest fire was making its way along the tinderbox ridges above them, flaring and shimmering against the overcast like the northern lights. Cold as it was he stood there a long time. The color of it moved something in him long forgotten.

Example of Imagery in Moby-Dick

The passage ago appears at the very end of Herman Melville's Moby-Dick and describes the ocean in the moments after a destroyed ship has sunk into it. Notice how Melville combines visual, auditory, and kinesthetic imagery ("small fowls flew"; "white surf beat"), and how the imagery allows you to almost feel the vortex created by the sinking ship and then the silence left behind when it closes.

Now small fowls flew screaming over the yet yawning gulf; a sullen white surf beat against its steep sides; then all collapsed, and the great shroud of the sea rolled on as it rolled five thousand years ago.

Example of Imagery in Song of Solomon

As she unfolded the white linen and let it billow over the fine mahogany table, she would look once more at the large water mark. She never set the table or passed through the dining room without looking at it. Like a lighthouse keeper drawn to his window to gaze once again at the sea, or a prisoner automatically searching out the sun as he steps into the yard for his hour of exercise, Ruth looked for the water mark several times during the day.

Example of Imagery in Perfume: The Story of a Murderer

The main character of Patrick Suskind's novel Perfume: The Story of a Murderer has a supernaturally powerful sense of smell. In this passage, which describes the smells of an 18th century city, the narrator captures the nature of 18th century cities—their grittiness and griminess—through the smell of their refuse, and how in such a world perfume might be not just a luxury but a necessity. Further, he makes readers aware of a world of smell of which they normally are only slightly aware, and how a super-sensitive sense of smell could both be powerful but also be overwhelmingly unpleasant. And finally, through smell the narrator is able to describe just how gross humans can be, how they are in some ways just another kind of animal, and how their bodies are always failing or dying. Through descriptions of smell, in other words, the novel also describes an overlooked aspect of the human condition.

Why Do Writers Use Imagery?

Imagery is essential to nearly every form of writing, and writers use imagery for a wide variety of reasons: 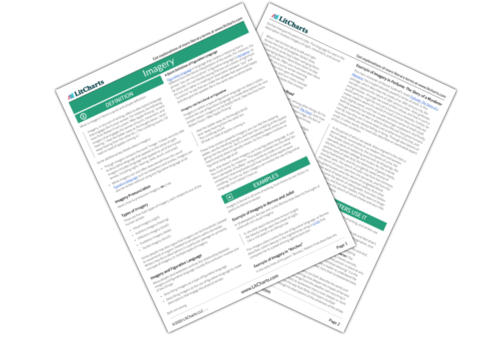