What is a climax? Here’s a quick and simple definition:

Climax is a figure of speech in which successive words, phrases, clauses, or sentences are arranged in ascending order of importance, as in "Look! Up in the sky! It's a bird! It's a plane! It's Superman!"

Some additional key details about climax:

Here's how to pronounce climax: cly-max

Climax appears all over the place, and it's easy to identify if you know what you're looking for. The definition of climax includes any use of language that is characterized by a feeling of mounting intensity across successive words, phrases, clauses, or sentences, but it's generally agreed that something is only an example of climax if tension is built over the course of three or more discrete words, phrases, clauses, or sentences. So for example, the following phrases do not count as climax, since each one contains only two discrete ideas:

Here's a handful of examples that do contain at least three discrete words or clauses in order of increasing importance, which qualifies them as examples of climax:

When Climax is Unclear

It can sometimes be difficult to tell whether the words, phrases, or sentences in a sequence actually have a hierarchy of importance or power, which makes it difficult to know whether climax is at play. For instance, was Abraham Lincoln using climax when he declared in his Gettysburg Address that the Union was fighting to defend a government

Here's another example: is the following phrase from the Declaration of Independence an example of climax?

Life, liberty, and the pursuit of happiness.

Here, some might argue that t's hard to argue that happiness is "more important" than life itself, and so this isn't climax. But others might point out that the right to life is basic, while liberty and the right to pursue happiness are the hallmarks of a truly free society, and so it is climax.

Ultimately, if you can see a way that the three words or phrases are increasing in importance, then you can make a case that it is an example of climax. But if you're unable to tell whether a sentence is using climax even after you've analyzed its words closely, it's probably safe to say that, even if it is an example of climax, it's not a very good or effective one.

Generally speaking, climax works in tandem with parallelism. In parallelism, two or more elements of a sentence (or series of sentences) have the same grammatical structure, which makes lists (or sequences of multiple ideas) easier to read and understand. All of the examples we've looked at so far have used parallelism, and the following is another good example of both climax and parallelism:

The three clauses of the sentence are parallel because each starts off with the pronoun "I" followed by a verb in the past tense, so therefore they have the same grammatical structure. Because the grammatical structure of the clauses is identical, it is easer to see that the ideas in each successive clause grow in intensity and significance.

The opposite of climax is a figure of speech called anticlimax. There are two different types of anticlimax.

The First Type of Anticlimax

In the first type, words are arranged in order of descending importance, as in:

The Second Type of Anticlimax

In the second type of anticlimax, which is similar to but slightly different from the first, words are arranged in order of ascending importance with a sudden shift at the end back to the unimportant, as in:

Anticlimax generally has a comedic effect, since it subverts the listener's expectations by placing the least important thing at the end of the list, where they would expect to hear the most important thing. Some examples of anticlimax are intended to be funny (like Woody Allen's), and some are funny without intending to be (like the Yale motto).

In all the examples that follow, we'll continue to highlight the instances where climax occurs, using different colors to indicate the increasing importance or power of the words.

Examples of Climax in Literature

Climax is used throughout literature, from poetry to fiction to nonfiction. Here are just a few examples.

In this passage from Herman Melville's Moby-Dick, climax is used very effectively to convey how Captain Ahab feels about the whale.

All that most maddens and torments; all that stirs up the lees of things; all truth with malice in it; all that cracks the sinews and cakes the brain; all the subtle demonisms of life and thought; all evil, to crazy Ahab, were visibly personified and made practically assailable in Moby Dick.

Climax in Shakespeare's “The Passionate Pilgrim”

Here's an example of climax from a poem by Shakespeare:

Beauty is but a vain and doubtful good;
A shining gloss that fadeth suddenly;
A flower that dies when first it gins to bud;
A brittle glass that’s broken presently:
A doubtful good, a gloss, a glass, a flower,
Lost, faded, broken, dead within an hour.

The final lines of this stanza contain two examples of climax: in the second-to-last line, words increase in beauty and delicacy, from the middling "doubtful good" to "flower." In the last line, the words once again increase in intensity, but this time in a progression from bad to worse ("lost" to "dead").

Examples of Climax in Music

You may be surprised, once you start listening for it, just how often climax is used in songwriting. It's an effective figure of speech for making lyrics memorable.

This song by Van Morrison uses climax in each verse to describe the conditions of a peaceful day. Here, the first verse climaxes with Morrison imagining everything falling into place "like the flick of a switch."

Climax in Drake's "Too Good"

Here's the chorus from Drake's song "Too Good," featuring Rihanna. This may not seem like a clear example of climax, but we'll explain why it is. The first thing to take note of is the use of parallelism in the repetition of "last night:"

The thing that ultimately makes this an example of climax—even though it's not immediately clear whether any one idea in the sequence is more important than any of the others—is that the subject of the song turns out to be the important realization that Drake arrives at (i.e., that he's too obliging of the woman he's seeing) and not that he lost his patience or got high. So in that sense, the sequence follows an order of increasing importance.

Examples of Climax in Speeches

Climax is a highly effective tool of rhetoric, since it lends structure at the sentence level, builds anticipation in the listener, and makes it clear which idea in a series the speaker assigns the most value.

This excerpt from a 2004 speech made by Obama contains a great example of climax:

When we send our young men and women into harm's way, we have a solemn obligation not to fudge the numbers or shade the truth about why they're going, to care for their families while they're gone, to tend to the soldiers upon their return, and to never ever go to war without enough troops to win the war, secure the peace, and earn the respect of the world.

Notice how another instance of climax occurs within the broader climactic arc of this passage, when Obama says, at the very end: "win the war, secure the peace, and earn the respect of the world."

Climax in Martin Luther King Jr.'s "I Have A Dream" Speech

MLK used climax frequently throughout his speeches. Here are two separate examples from his famous "I Have a Dream" speech:

And here's another passage from the same speech that uses climax:

What's the Function of a Climax in Literature?

Putting the most important information at the end of a sentence may not seem that logical if you're trying to convey critical information very quickly—for instance, imagine if every road sign, or every poster for an event, buried the most significant information at the very end. But it proves to be a logical and highly effective way to organize a sentence or paragraph if you have a series of ideas to convey and you want to work your way up to your most powerful ideas instead of giving them all away right off the bat. In addition to this, there are many reasons why a writer might want to use climax to organize their ideas: 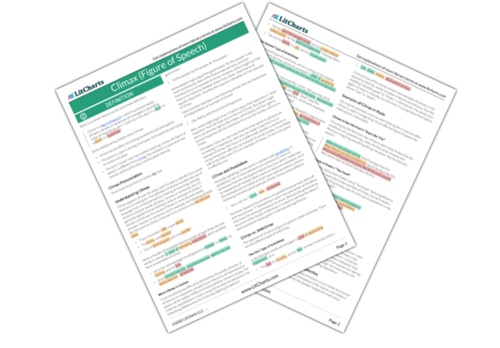