What is point of view? Here’s a quick and simple definition:

Some additional key details about point of view:

The Three "Modes" of Point of View

Stories can be told from one of three main points of view: first person, second person, or third person. Each of the different modes offers an author particular options and benefits, and the point of view that an author chooses will have a tremendous impact on the way that a reader engages with a story.

Consider also one of the most famous examples of first person point of view, the very first line of Herman Melville's Moby-Dick:

Melville uses first person here because he wants to establish a confessional tone for the protagonist. He wants the reader to feel like Ishmael has just sat down next to him on a bar stool, and is about to tell him his life's story. Only first person can have this colloquial and intimate effect. Saying, "His name was Ishmael," for instance, would insert more distance between the reader and the character Ishmael, because the third person narrator would sit between the reader and Ishmael. First person, in this way, can have the effect of connecting the reader directly with the story.

First Person Point of View and the Protagonist

Eventually you ascend the stairs to the street. You think of Plato's pilgrims climbing out of the cave, from the shadow world of appearances toward things as they really are, and you wonder if it is possible to change in this life. Being with a philosopher makes you think.

Of the three points of view, second person is the most rarely used, primarily because it doesn't allow the narrator as much freedom as first person and third person, so it's hard to sustain this style of narration for very long.

"What are you doing?" Yossarian asked guardedly when he entered the tent, although he saw at once.

"Please stop it," said Yossarian. "You're making me nervous."

The exchange above is narrated by a narrator who is outside the interaction between Yossarian and Orr; such distance is the hallmark of third person point of view.

Third Person and Degree of Distance

The third person mode is unique from first and second person in another way as well: third person has different variants. These variants depend on how far removed the narrator is from the events of the story, and how much the narrator knows about each character:

Every work of literature has a point of view, and so there are essentially endless examples of point of view in literature. The examples below were chosen because they are good examples of the different modes, and in the case of The Metamorphosis the the subtle shift in the nature of the narrator's point of view also shows how an author can play with point of view to suit the themes and ideas of a story.

A great example of third person point of view in literature is the first line from Kafka's The Metamorphosis.

As Gregor Samsa awoke one morning from uneasy dreams he found himself transformed in his bed into a gigantic insect.

For the remainder of the book, Kafka follows the protagonist, Gregor Samsa, in a limited third person point of view as he struggles to come to terms with his sudden transformation into an insect. For as long as Gregor remains alive, the third person narrator remains limited by Gregor's own consciousness—the story is told in the third person, but the narrator never knows or sees any more than Gregor himself does.

However, in the few pages of the story that continue after Gregor dies, the narrator shifts into a third person omniscient point of view, almost as if Gregor's death has freed the narrator in a way not so dissimilar to how his death tragically relieves a burden on his family.

Leo Tolstoy's Anna Karenina is a great example of the omniscient third person point of view. In the novel, the narrator sees and knows all, and moves around between the lives of the different characters, dipping into their internal lives and thoughts, and commenting on the narrative as a whole. In Part 5, Chapter 6, the internal lives of two characters are commented on at once, in the moment of their marriage to one another:

Often and much as they had both heard about the belief that whoever is first to step on the rug will be the head in the family, neither Levin nor Kitty could recall it as they made those few steps. Nor did they hear the loud remarks and disputes that, in the observation of some, he had been the first, or, in the opinion of others, they had stepped on it together.

Point of View in Thoreau's Walden

Henry David Thoreau's transcendental meditations on isolation were based on his actual lived experience. It makes sense, then, that Walden (his account of time spent alone in the woods) is written in the first person point of view:

What's the Function of Point of View in Literature?

Point of view is the means by which an author relays either one or a multiplicity of perspectives about the events of their story. It is the lens crafted by the writer that allows the reader to see a story or argument unfold. Depending on how much information the writer wants to give the reader, this lens will be constructed differently—or in other words, a different mode of point of view will be chosen:

Other Helpful Point of View Resources 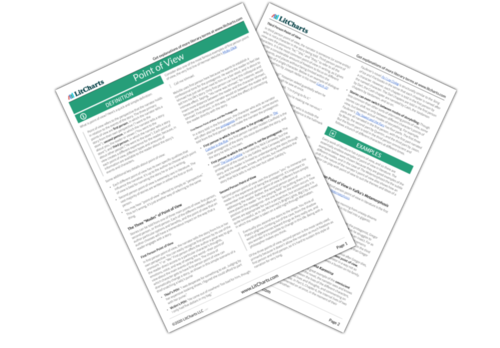