What is a pathetic fallacy? Here’s a quick and simple definition:

Pathetic fallacy occurs when a writer attributes human emotions to things that aren't human, such as objects, weather, or animals. It is often used to make the environment reflect the inner experience of a narrator or other characters. For example, if a writer mourning the death of a loved one writes that "the flowers on the grave drooped in sadness," this would be an example of pathetic fallacy, since the flowers do not, in fact, feel sad.

How to Pronounce Pathetic Fallacy

Any time a writer describes a wave as "angry," the sun as "smiling," or birdsong as "mournful," it's an example of pathetic fallacy, since emotions are being attributed to things that don't actually have them (or at least not in the way humans do). Although the example of a sun "smiling down" on someone technically doesn't refer explicitly to an emotion (e.g., happiness) it's fair to count it as an example of pathetic fallacy because the action being described so clearly suggests a specific emotion.

Anthropomorphism also involves the attribution of human characteristics to non-human things. But it does so in ways that are quite different from the pathetic fallacy.

Although it wasn't until the 19th century that John Ruskin coined the term "pathetic fallacy," writers have been assigning human emotions to things in their surroundings for much longer than that. In particular, pathetic fallacy can be found in poetry, narrative literature, and music, though it can be found in other sorts of writing as well.

Pathetic Fallacy in Poetry and Literature

Pathetic fallacy is a useful tool in literature for setting the tone of a scene, suggesting the emotional state of a character, or creating a vivid image of an environment.

In Julius Caesar, Shakespeare describes a violent storm that disrupts the Roman capital on the night before Caesar's assassination. The weather reflects the peril of the political moment through several pathetic fallacies, with "scolding winds," "ambitious," enraged oceans, and "threatening clouds." The conspirators go on to interpret these events as proof that nature itself (or the gods they believed ruled over it) is crying out a warning for Caesar's death, projecting their own fears and desires onto the storm.

Are you not moved, when all the sway of earth
Shakes like a thing see? O Cicero,
I have seen the tempests, when the scolding winds
Have rived the knotty oaks, and I have seen
The ambitious ocean swell and rage and foam,
To be exalted with the threatening clouds:
But never till to-night, never till now,
Did I go through a tempest dropping fire.

Throughout Mary Shelley's classic tale, the dangerous and sublime power of the landscape is a vital and dramatic element of the narrative. In this excerpt, Victor describes a small island retreat in Scotland where he has been driven against his will. He contrasts the "desolate and appalling" landscape with his memory of the "fair" lakes and "gentle" sky of his home in Switzerland.

...in the evening, when the weather permitted, I walked on the stony beach of the sea, to listen to the waves as they roared and dashed at my feet. It was a monotonous, yet ever-changing scene. I thought of Switzerland; it was far different from this desolate and appalling landscape. Its hills are covered with vines, and its cottages are scattered thickly in the plains. Its fair lakes reflect a blue and gentle sky; and, when troubled by the winds, their tumult is but as the play of a lively infant, when compared to the roarings of the giant ocean.

Victor's descriptions of both landscapes perfectly capture his own feelings about each: the wave-swept island is a lonely and terrifying place, a prison where he is confined to the monotony of his work, while the calm waves on the lakes of Switzerland are playful and welcoming. Victor's perspective is projected onto the natural world around him here, as it is elsewhere in the novel.

Rachel Carson's groundbreaking environmental text Silent Spring often speaks of its natural subjects in distinctly human terms, in an attempt to create in the reader a sense of care and concern for the plight inflicted on the natural world by humans.

To the author of this paper, many of us would unquestionably be suspect, convicted of some deep perversion of character because we prefer the sight of the vetch and the clover and the wood lily in all their delicate and transient beauty to that of roadsides scorched as by fire, the shrubs brown and brittle, the bracken that once lifted its proud lacework now withered and drooping.

Here, Carson personifies the weeds that are under attack from dangerous herbicides; to describe the lacework of the bracken as "proud" is a pathetic fallacy that places the reader firmly on the side of this majestic fern that has been ravaged by environmental destruction.

In the poem "Porphyria's Lover," the speaker describes the wind as sullen, and destroying trees out of spite.

The sullen wind was soon awake,
It tore the elm-tops down for spite,
and did its worst to vex the lake

The wind, of course, may be powerful and destructive, but it isn't purposefully causing damage. Instead, the speaker's description of the wind reveals the speaker's state of mind.

Songs often express the intense emotion of their singers, and many songs project these emotions onto the landscape in typical instances of pathetic fallacy.

Bob Dylan uses pathetic fallacy in this song to transform an emotionless entity—a forest—into an important element in establishing the mood of his song about the deadly prospect of the "hard-rain" (a metaphor for atomic bombs) that seems like it's coming.

Why Do Writers Use the Pathetic Fallacy?

A scientist might say (as John Ruskin did) that describing non-human things as having emotions is, essentially, incorrect—a fallacy. However, writers may make the conscious choice to do so, with an awareness that such a description is figurative and not literal. This can serve a few different purposes for a writer. It can help the them: 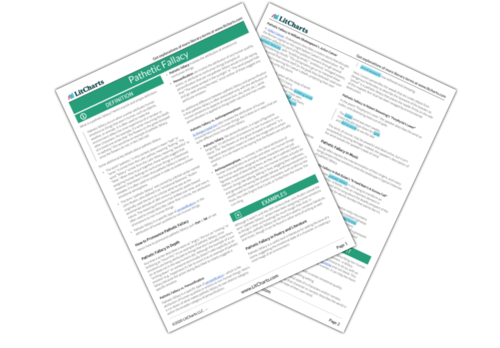