What is slant rhyme? Here’s a quick and simple definition:

Traditionally, slant rhyme referred to a type of rhyme in which two words located at the end of a line of poetry themselves end in similar—but not identical—consonant sounds. For instance, the words "pact" and slicked" could be slant rhymed. The term has expanded over time to include additional types of similar sounds. More precisely, slant rhyme today now includes words whose last syllables contain assonance ("unpack" and "detach") as well as words whose last syllables contain final consonants that have consonance ("country" and "contra").

Originally, slant rhyme referred only to:

The Broader Definition of Slant Rhyme

Slant Rhyme vs. Consonance and Assonance

So while the words "pallate" and "polite" contain a bunch of consonance (on the p, l, and t), they are only slant rhymes because of the t in their final syllable.

Perfect rhyme is the technical term for what most people think of simply as "rhyme." It's worth it to understand how perfect rhyme is different from slant rhyme. Perfect rhyme occurs when the sounds shared by two or more words:

The rules for what makes a slant rhyme are much less strict: the sound shared by both words does not have to include a stressed syllable, and the sounds don't have to be identical—they can share just the same consonant or vowel sounds in their final syllable. So, "cavern" and "other" are slant rhymes, but they are absolutely not perfect rhymes.

William Butler Yeats was one of the first poets to use slant rhyme in his work extensively enough to popularize it for other modern poets. In this poem, you can identify the uses of slant rhyme because the poem's rhyme scheme shows you where to look for them. The poem generally follows a rhyme scheme of ABAB CDCD (etc), so it follows that in the second and fourth lines we might expect to find words that rhyme—but instead those lines end with the words "faces" and "houses," which are in fact slant rhymes and not perfect rhymes (because the sounds they share are only their final unstressed syllables). Similarly, "gibe" and "club" lines 10 and 12 are slant thymes because they share only the consonant b's at their end.

I have met them at close of day
Coming with vivid faces
From counter or desk among grey
Eighteenth-century houses.
I have passed with a nod of the head
Or polite meaningless words,
Or have lingered awhile and said
Polite meaningless words,
And thought before I had done
Of a mocking tale or a gibe
To please a companion
Around the fire at the club,
Being certain that they and I
But lived where motley is worn:
All changed, changed utterly:
A terrible beauty is born.

Note that although "I" and "utterly" don't end with the exact same vowel sound, they are also an example of a slant rhyme. Yeats here is taking some creative license, treating the "i" and "ee" sounds as close-enough approximations of the same sound to be treated as if they were the same, which is a fairly common thing for poets to do with all sorts of rhymes, including slant rhymes.

Slant Rhyme in Dickinson's "Not any higher stands the Grave"

Save for the almost perfect rhyme of "work" and "pitchfork," all of the other lines in Philip Larkin's poem "Toads" are parts of slant rhymes made up of words that share either a final unstressed syllable, or share the final consonant sounds of a stressed syllable without sharing vowel sounds. The following excerpt shows the first four stanzas of the poem.

Why should I let the toad work
Squat on my life?
Can't I use my wit as a pitchfork
and drive the brute off?

Six days of the week it soils
With its sickening poison-
Just for paying a few bills!
That's out of proportion.

Lots of folk live up lanes
With fires in a bucket,
Eat windfalls and tinned sardines-
They seem to like it.

Slant Rhyme in Creeley's "The Conspiracy"

The second and third couplets in this poem by Robert Creeley make use of slant rhyme.

Things tend to awaken
even through random communication.

It's common for songwriters to use slant rhymes in addition to perfect rhymes—especially in rap. This 1989 track by Big Daddy Kane gives an expert example of slant rhyme. Note how in this excerpt from the song, Kane creates his slant rhymes not through simple pairs of words, but by sometimes matching sets of words ("top of me") with single words that make up the same number of syllables ("monopoly").

The heat is on so feel the fire
Come off the empire, on a more higher
Level than def, one step beyond dope
The suckers all scope and hope to cope but nope
Cause I can never let 'em on top of me
I play 'em out like a game of Monopoly
Let 'em speed around the board like an Astro
Then send 'em to jail for trying to pass Go
Shaking 'em up, breaking 'em up, taking no stuff
But it still ain't loud enough

Why Do Writers Use Slant Rhyme?

Much like the perfect rhymes that are more common in poetry, slant rhymes give a sense of unity and cohesion to poetry by repeating sounds according to a pattern or rhyme scheme. Unlike perfect rhymes, however, slant rhymes may not always be obvious to the ear, so some poets use slant rhymes to give their poetry a more subtle musical quality. Still other poets may choose to use slant rhyme because it gives them a wider range of word choices than traditional rhyming does—enabling them to express themselves more freely (and therefore more precisely) than they might be able to if they needed to use words that rhymed perfectly. Slant rhymes can also have a way of surprising readers by omitting traditional rhymes where they might be expected to occur, satisfying the reader's ear in a way that they may not have expected. 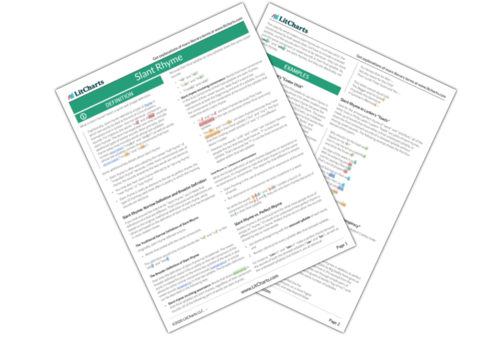