What is theme? Here’s a quick and simple definition:

A theme is a universal idea, lesson, or message explored throughout a work of literature. One key characteristic of literary themes is their universality, which is to say that themes are ideas that not only apply to the specific characters and events of a book or play, but also express broader truths about human experience that readers can apply to their own lives. For instance, John Steinbeck's The Grapes of Wrath (about a family of tenant farmers who are displaced from their land in Oklahoma) is a book whose themes might be said to include the inhumanity of capitalism, as well as the vitality and necessity of family and friendship.

Some additional key details about theme:

Here's how to pronounce theme: theem

Every work of literature—whether it's an essay, a novel, a poem, or something else—has at least one theme. Therefore, when analyzing a given work, it's always possible to discuss what the work is "about" on two separate levels: the more concrete level of the plot (i.e., what literally happens in the work), as well as the more abstract level of the theme (i.e., the concepts that the work deals with). Understanding the themes of a work is vital to understanding the work's significance—which is why, for example, every LitCharts Literature Guide uses a specific set of themes to help analyze the text.

Although some writers set out to explore certain themes in their work before they've even begun writing, many writers begin to write without a preconceived idea of the themes they want to explore—they simply allow the themes to emerge naturally through the writing process. But even when writers do set out to investigate a particular theme, they usually don't identify that theme explicitly in the work itself. Instead, each reader must come to their own conclusions about what themes are at play in a given work, and each reader will likely come away with a unique thematic interpretation or understanding of the work.

Writers often use three literary devices in particular—known as symbol, motif, and leitwortstil—to emphasize or hint at a work's underlying themes. Spotting these elements at work in a text can help you know where to look for its main themes.

Symbol, motif and leitwortstil are simply techniques that authors use to emphasize themes, and should not be confused with the actual thematic content at which they hint. That said, spotting these tools and patterns can give you valuable clues as to what might be the underlying themes of a work.

A work's thematic concept is the broader topic it touches upon—for instance:

while its thematic statement is the particular argument the writer makes about that topic through his or her work, such as:

Should You Use Thematic Concepts or Thematic Statements?

Some people argue that when describing a theme in a work that simply writing a thematic concept is insufficient, and that instead the theme must be described in a full sentence as a thematic statement. Other people argue that a thematic statement, being a single sentence, usually creates an artificially simplistic description of a theme in a work and is therefore can actually be more misleading than helpful. There isn't really a right answer in this debate.

In our LitCharts literature study guides, we usually identify themes in headings as thematic concepts, and then explain the theme more fully in a few paragraphs. We find thematic statements limiting in fully exploring or explaining a the theme, and so we don't use them. Please note that this doesn't mean we only rely on thematic concepts—we spend paragraphs explaining a theme after we first identify a thematic concept. If you are asked to describe a theme in a text, you probably should usually try to at least develop a thematic statement about the text if you're not given the time or space to describe it more fully. For example, a statement that a book is about "the senselessness of violence" is a lot stronger and more compelling than just saying that the book is about "violence."

One way to try to to identify or describe the thematic statement within a particular work is to think through the following aspects of the text:

After you've thought through these different parts of the text, consider what their answers might tell you about the thematic statement the text might be trying to make about any given thematic concept. The checklist above shouldn't be thought of as a precise formula for theme-finding, but rather as a set of guidelines, which will help you ask the right questions and arrive at an interesting thematic interpretation.

The following examples not only illustrate how themes develop over the course of a work of literature, but they also demonstrate how paying careful attention to detail as you read will enable you to come to more compelling conclusions about those themes.

Fitzgerald explores many themes inThe Great Gatsby, among them the corruption of the American Dream.

Gatsby pursues the American Dream, driven by the idea that hard work can lead anyone from poverty to wealth, and he does so for a single reason: he's in love with Daisy. However, he pursues the dream dishonestly, making a fortune by illegal means, and ultimately fails to achieve his goal of winning Daisy's heart. Furthermore, when he actually gets close to winning Daisy's heart, she brings about his downfall. Through the story of Gatsby and Daisy, Fitzgerald expresses the point of view that the American Dream carries at its core an inherent corruption. You can read more about the theme of The American Dream in The Great Gatsby here.

In Things Fall Apart, Chinua Achebe explores the theme of the dangers of rigidly following tradition.

Through the tragic story of Okonkwo, Achebe is clearly dealing with the theme of tradition, but a close examination of the text reveals that he's also making a clear thematic statement that following traditions too rigidly leads people to the greatest sacrifice of all: that of personal agency. You can read more about this theme in Things Fall Apart here.

Themes in Robert Frost's The Road Not Taken

Poem's have themes just as plot-driven narratives do. One theme that Robert Frost explores in this famous poem, The Road Not Taken, is the illusory nature of free will.

Frost's speaker has reached a fork in the road, which—according to the symbolic language of the poem—means that he or she must make an important life decision. However, the speaker doesn't really know anything about the choice at hand: the paths appear to be the same from the speaker's vantage point, and there's no way he or she can know where the path will lead in the long term. By showing that the only truly informed choice the speaker makes is how he or she explains their decision after they have already made it, Frost suggests that although we pretend to make our own choices, our lives are actually governed by chance.

What's the Function of Theme in Literature?

Themes are a huge part of what readers ultimately take away from a work of literature when they're done reading it. They're the universal lessons and ideas that we draw from our experiences of works of art: in other words, they're part of the whole reason anyone would want to pick up a book in the first place!

It would be difficult to write any sort of narrative that did not include any kind of theme. The narrative itself would have to be almost completely incoherent in order to seem theme-less, and even then readers would discern a theme about incoherence and meaninglessness. So themes are in that sense an intrinsic part of nearly all writing. At the same time, the themes that a writer is interested in exploring will significantly impact nearly all aspects of how a writer chooses to write a text. Some writers might know the themes they want to explore from the beginning of their writing process, and proceed from there. Others might have only a glimmer of an idea, or have new ideas as they write, and so the themes they address might shift and change as they write. In either case, though, the writer's ideas about his or her themes will influence how they write.

One additional key detail about themes and how they work is that the process of identifying and interpreting them is often very personal and subjective. The subjective experience that readers bring to interpreting a work's themes is part of what makes literature so powerful: reading a book isn't simply a one-directional experience, in which the writer imparts their thoughts on life to the reader, already distilled into clear thematic statements. Rather, the process of reading and interpreting a work to discover its themes is an exchange in which readers parse the text to tease out the themes they find most relevant to their personal experience and interests. 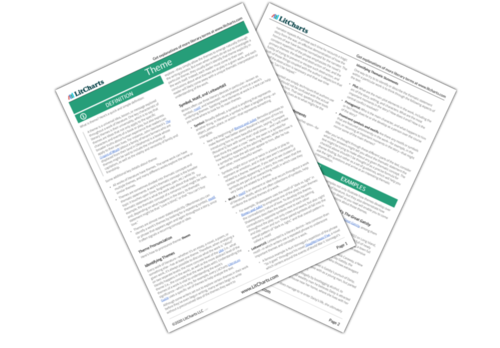