What is a ballad? Here’s a quick and simple definition:

A ballad is a type of poem that tells a story and was traditionally set to music. English language ballads are typically composed of four-line stanzas that follow an ABCB rhyme scheme.

Some additional key details about ballads:

Here's how to pronounce ballad: Bal-lad

Ballads are a type of formal verse, meaning that they tend to have both strict meter and a defined rhyme scheme. For that reason, it's helpful to have a strong grasp of what meter and rhyme scheme are in order to understand ballads. We provide more details about these terms on their own pages, but here's a quick guide:

Though the majority of ballads use iambs as their main foot, there is no specific meter required for a ballad. This means that while one ballad might use common meter (and many do), another ballad might use a different sort of meter. Generally speaking, ballads have a consistent meter throughout, so that a ballad in common meter will be common meter all the way through, while a ballad with another meter will use that meter all the way through. However, even poems with consistent meter tend to have some mild variations on that meter within them, meaning that a ballad in iambic pentameter will likely contain occasional lines of eleven or more syllables that break the "ten syllables per line" rule of iambic pentameter.

The stanzas of a typical ballad follow the rhyme scheme "ABCB." For instance, here's the first stanza of a famous Irish folk ballad entitled "Tam Lin" that exemplifies the traditional ABCB rhyme scheme.

O I forbid you, maidens all,
That wear gold in your hair,
To come or go by Carterhaugh,
For young Tam Lin is there.

The same ballad has a refrain of six lines that shows how the typical "ABCB" rhyme scheme can be modified for stanzas with more than four lines. The following stanza has a rhyme scheme of ABCBDB.

The Evolution of the Ballad

The ballad as a musical and poetic form originated in Europe in the late middle ages—as early as the 14th century—when traveling minstrels popularized the form. Since then, many writers have adapted the ballad to their own vision for new and original compositions. As a result, many different types of ballads exist. These variations can largely be broken up into three main categories that help define the evolution of the ballad:

The following examples of ballads show several types of variations of the form. To help highlight the structure of each example, we've highlighted all "A" rhymes in green, "B" rhymes in red, and "C" rhymes in yellow.

In Scarlet town, where I was born,
There was a fair maid dwellin’,
Made every youth cry Well-a-way!
Her name was Barbara Allen.

John Keats' ballad "La Belle Dame sans Merci: A Ballad" is a perfect example of the lyrical ballad's departure from the form of the traditional ballad. While this poem employs the ABCB rhyme scheme and refrain ("O what can ail thee, knight-at-arms") that are typical of a traditional ballad, Keats' use of meter is unconventional for a ballad—particularly the short fourth lines of each stanza.

O what can ail thee, knight-at-arms,
Alone and palely loitering?
The sedge has withered from the lake,
And no birds sing.

O what can ail thee, knight-at-arms,
So haggard and so woe-begone?
The squirrel’s granary is full,
And the harvest’s done.

Lyrical Ballad: "The Rime of the Ancient Mariner"

Samuel Taylor Coleridge's long lyrical ballad "The Rime of the Ancient Mariner" employs many different types of meter, but the poem frequently uses common meter (the alternation of iambic tetrameter with iambic trimeter), as in the second stanza below.

The very deep did rot – Oh Christ!
That ever this should be.
Yea, slimy things did crawl with legs,
Upon the slimy sea.

Ballad: "The Ballad of Reading Gaol"

And all men kill the thing they love,
By all let this be heard
Some do it with a bitter look,
Some with a flattering word,
The coward does it with a kiss,
The brave man with a sword!

Edgar Allen Poe's ballad breaks with convention by using stanzas of varying lengths and a highly irregular meter. However, the poem does employ the typical ABCB rhyme scheme (though it can be ABCBDB or even ABCBDBEB in longer stanzas) and a refrain: "In this kingdom by the sea."

Modern Ballad: "Livin' on a Prayer"

Bon Jovi's mega-hit from the 1980s, "Livin' on a Prayer," is a pop ballad: like traditional ballads, it tells a story, it's set to music, and it has a repeating refrain that makes the lyrics stick in your head. The song does not, however, employ the traditional ABCB rhyme scheme. The excerpt below contains the first verse and the song's refrain.

Once upon a time not so long ago
Tommy used to work on the docks, union's been on strike
He's down on his luck, it's tough, so tough
Gina works the diner all day working for her man
She brings home her pay, for love, for love

Why Do Writers Choose to Write Ballads?

As the ballad has undergone major shifts in form and content throughout its centuries-long history, the answer to why poets write ballads question differs, primarily based on the era in which a ballad was written. Folk ballads—the oldest form of ballad—were generally transmitted orally, so the repetitive form of the ballad was helpful for memorization. The strict meter and rhyme scheme of folk ballads helped singers and storytellers to remember the words of the poems, as did the recurring sounds of rhymes and the repeating words of refrains. All in all, the traditional ballad was an ideal form for narrative poetry that was transmitted orally because the form made the words so easy to remember. In addition, the communal nature of oral and musical storytelling made the ballad a perfect form for transmitting and preserving a culture's most important stories and myths.

After the advent of printing, though, memorization became less important—poetry was no longer exclusively an oral tradition, nor even the primary means of telling stories. In this context, writers' interest in ballads shifted away from the features that had made this form helpful for oral and musical storytelling, and more towards the form's potential in written language. A writer of this new kind of ballad—which coalesced into its own form of ballad, the lyrical ballad, in the 18th century—would choose a lyrical over a traditional ballad because of its less strict conventions regarding meter and rhyme and, more importantly, because the lyrical ballad took everyday life as its subject matter, rather than the tales of love and adventure that were the typical subjects of the folk ballad. Since writers used lyrical ballads to tell their own stories rather than the stories and myths of a broader culture (and because lyrical ballads were written rather than sung), the lyrical ballad was considered to be a more literary form than the traditional ballad. Thus, a writer might choose to write a lyrical ballad because the prestige of the form, combined with its association with the folk ballad, could give power to a commonplace story, placing a writer's own everyday life or observations alongside myths that were immortalized by traditional ballads.

The era of the lyrical ballad is considered to have been the apex of the ballad's literary prestige. While lyrical ballads are still written today, the ballad as a literary form began to lose its prestige during the Victorian era because of its increasing association with sentimentality. This uptick in sentimentality accompanied the return of ballads to their musical roots; rather than poems about everyday life, the term "ballad" began, in the 19th century, to connote something closer to its contemporary meaning, a slow love song. Contemporary ballads, like traditional ballads, use music to talk about love, but they have no strict meter or rhyme scheme. A writer today would be most likely to write a ballad out of the desire to tell an emotional story through song. This, however, is just the most common usage of "ballad"—the term can still be used by poets to describe poetry that tells a story, regardless of its meter and rhyme. 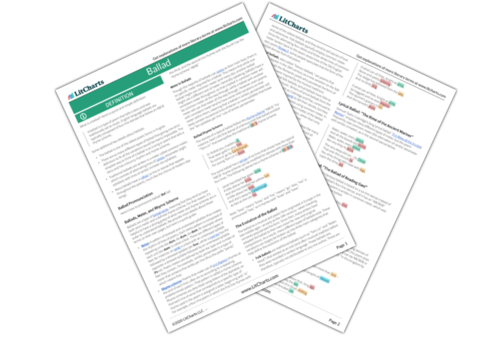