What is a protagonist? Here’s a quick and simple definition:

The protagonist of a story is its main character, who has the sympathy and support of the audience. This character tends to be involved in or affected by most of the choices or conflicts that arise in the narrative. For example, Snow White is the protagonist of Snow White and the Seven Dwarfs.

Some additional key details about protagonists:

Here's how to pronounce protagonist: pro-tag-uh-nist

The Evolution of Protagonist

The term protagonist originally referred to the character who engaged with the chorus in Ancient Greek tragedies (the chorus is a group of actors who recite their lines in unison and represent "the masses," or the general public). However, the definition expanded over time. Sophocles was one of the first Ancient Greek playwrights to put more than two characters on stage, and thus further expanded the definition, bringing its meaning closer to our modern definition: the main character among many characters who appear within a story.

How to Identify the Protagonist of a Story

In order to better understand what makes a character a protagonist, it's helpful to also understand its opposite: antagonist. The antagonist is most often the protagonist's opponent in the story—such as a villain in a superhero movie, or the high school bully in an 80s teen movie.

The Protagonist and Antagonist in Stephen King's Misery

In Stephen King's Misery, a writer named Paul crashes his car on his way to Los Angeles, shattering both of his legs. He's found by a woman, Annie, who takes him to her house to nurse him back to health. Annie reveals herself to be one of Paul's biggest fans, and it gradually becomes clear that she's mentally disturbed and dangerous. Paul tries to escape a few times, but Annie always catches him and punishes him brutally (cutting off a finger and a foot). Annie is the book's antagonist.

King writes an extensive backstory on Annie, so her motivations are clear and her character isn't entirely impossible to relate to—and indeed, some readers might even pity her. In a way, she could be said to be the most multi-dimensional character in the book, but she still is not the protagonist. Paul is the novel's protagonist because its plot hinges on his fate, and the question of whether or not he will make it out alive. In other words, Paul is trying to carry out a series actions to move the plot forward (drive to LA, recover from his injuries, escape from the deranged Annie), while Annie is trying to stop Paul (with imprisonment, torture, threats), making her the antagonist.

Nearly every story has a protagonist, so there are countless examples to choose from. Below we've provided an example of each of the four main protagonist types: heroes, antiheroes, villain protagonists, and supporting protagonists.

Example of a Hero Protagonist in Beowulf

The epic poem Beowulf is one of the oldest surviving pieces of literature in the English language and its protagonist is an example of a traditional epic hero: he is relentlessly strong, brave, and just. The poem tells the story of Beowulf's bravery in battle against a monster named Grendel, who threatens to destroy the Danes. Later, Beowulf also risks his life to slay Grendel's mother, as well as a fire-breathing dragon. He sustains a fatal injury while fighting the dragon, but doesn't die until he has claimed victory and ensured the people's safety. The story closely follows Beowulf and his strength in battle, only mentioning others as necessary to better tell Beowulf's story, so there is no doubt Beowulf is the protagonist.

Example of an Antihero Protagonist inThe Catcher in the Rye

In J.D. Salinger's novel The Catcher in the Rye, a teenage boy, Holden Caulfield, has been expelled from multiple boarding schools and seems on the verge of being expelled from his current one. The novel follows the lonely, angry Holden as he abandons his school and wanders around New York City and searches for some form of companionship or comfort. Holden isn't a courageous character (he admits to being "yellow," or cowardly), nor is he honest (he perpetually lies), or strong (he admits to being weak). He's not terribly moral (he hires a prostitute) or tough (he ends up getting beaten up by her pimp). Holden dreams of being a hero—a "catcher in the rye," who saves kids from danger—but even that dream is based on him misunderstanding a classic poem. Put all together, Holden lacks the traditional attributes of a hero and is instead a teenage antihero. Nonetheless, Holden holds the audience's sympathy throughout the book (and many teenagers identify with him precisely because he is an antihero) and drives the plot, and is therefore the protagonist.

Example of a Villain Protagonist in Despicable Me

The protagonist in the animated film Despicable Me is Gru, a self-described villain. The plot hinges on Gru discovering that another villain is planning to steal the Great Pyramids of Giza, which makes Gru jealous, so he tries to thwart his rival's plan and pull off an even bigger evil plot (stealing the moon). Along the way, Gru does seemingly kind things (he adopts three orphaned girls, for instance), but always for the sole purpose of achieving his villainous goals (he thinks they can help him break into his rival's compound). While Gru does grow and change over the course of the story (he comes to love the girls he initially adopts and saves them from his rival), he never actually gives up being a villain. Still, Gru always has the sympathy of the audience and his actions and desires drive the story forward.

Example of a Supporting Protagonist in Sherlock Holmes

Arthur Conan Doyle's Sherlock Holmes is a brilliant private detective with astonishing powers of deductive reasoning. But Doyle's stories about him are narrated not by Holmes, but rather by Holmes' "sidekick," Dr. Watson. Watson, then, acts as a supporting protagonist in these stories. It's through Dr. Watson's voice and perspective that the audience is told Holmes' life story. Even though the stories follow the actions of Holmes, the fact that Dr. Watson is delivering this narrative makes him as essential to the story as Holmes himself. He is a supporting protagonist because he is at the center of the story, even though the story isn't about him.

What's the Function of a Protagonist in Literature?

Without protagonists, most stories would seem to be lacking a plot. Protagonists are one of the key building blocks of a narrative, so the vast majority of stories have at least one. Here are a few reasons why protagonists are so important to stories: 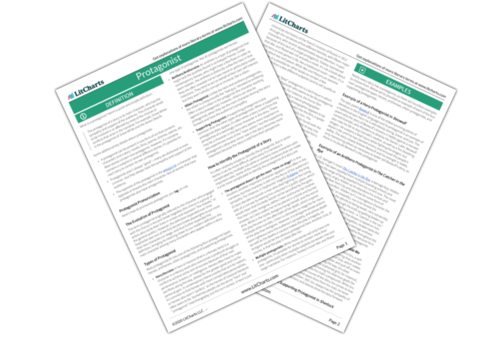