What is an end-stopped line? Here’s a quick and simple definition:

An end-stopped line is a line of poetry in which a sentence or phrase comes to a conclusion at the end of the line. For example, the poet C.P. Cavafy uses end-stopped lines in his poem "Ithaka" when he writes "Ithaka gave you the marvelous journey. / Without her you wouldn't have set out. / She has nothing left to give you now." If a line of poetry contains a complete phrase whose meaning doesn't change in light of what follows, it is considered to be end-stopped. However, an end-stopped line is often the end of a longer sentence that stretches across several lines.

End-stopped lines are used in all types of poetry, including poetry both with and without a meter.

The opposite of an end-stopped line is an enjambed line, in which a sentence or clause continues across a line break. To get a sense of the difference between end-stopped and enjambed lines, take a look at this excerpt from Romeo and Juliet which contains some of each type:

When he shall die,
Take him and cut him out in little stars,
And he will make the face of heaven so fine
That all the world will be in love with night
And pay no worship to the garish sun.

Here is a rare example of a Shakespearean sonnet in which most, if not all, of the lines are end-stopped. Typically, Shakespeare extends his sentences across the line break, making heavy use of enjambment.

Shall I compare thee to a summer’s day?
Thou art more lovely and more temperate:
Rough winds do shake the darling buds of May,
And summer’s lease hath all too short a date;
Sometime too hot the eye of heaven shines,
And often is his gold complexion dimm'd;
And every fair from fair sometime declines,
By chance or nature’s changing course untrimm'd;
But thy eternal summer shall not fade,
Nor lose possession of that fair thou ow’st;
Nor shall death brag thou wander’st in his shade,
When in eternal lines to time thou grow’st:
So long as men can breathe or eyes can see,
So long lives this, and this gives life to thee.

Each line in the poem ends with some punctuation—and many of the lines feel like complete phrases, even if the sentence continues in subsequent lines. However, some lines are enjambed, not end-stopped. For example, line 9, "But thy eternal summer shall not fade," is a complete sentence on its own. But line 10, which follows it, is grammatically and conceptually incomplete without line 9. For this reason, line 9 is probably best described as enjambed. Line 10 is end-stopped, since it brings to a close a grammatically complete phrase begun in line 9. By contrast, line 1 is a complete sentence on its own. Though line 2 is closely conceptually related to it—Shakespeare is giving reasons why he shouldn't compare his lover to a summer's day—it is grammatically independent. Line 1 is thus end-stopped, as are line 2, 3, 4, 5, 6, 10, 12, and 14.

End-Stopped Lines in Alexander Pope's "An Essay on Man: Epistle 1"

The English poet Alexander Pope was known for writing in closed couplets, a rhyming form that is heavily end-stopped. In this stanza from his poem "An Essay on Man: Epistle 1," every other line is end-stopped for the first six lines: the unit of the rhyme and the unit of syntax correspond precisely. In the final six lines of the stanza, Pope breaks this pattern and engages in a run of enjambments that last until the end of the stanza.

Say first, of God above, or man below,
What can we reason, but from what we know?
Of man what see we, but his station here,
From which to reason, or to which refer?
Through worlds unnumber'd though the God be known,
'Tis ours to trace him only in our own.
He, who through vast immensity can pierce,
See worlds on worlds compose one universe,
Observe how system into system runs,
What other planets circle other suns,
What varied being peoples ev'ry star,
May tell why Heav'n has made us as we are.

In this example from the poet Percy Bysshe Shelley, some of the lines are end-stopped and some are enjambed. This scenario, in which a poem has some of each type of line, is actually more common than for an entire poem to be either entirely end-stopped or entirely enjambed.

O world! O life! O time!
On whose last steps I climb,
Trembling at that where I had stood before;
When will return the glory of your prime?
No more—Oh, never more!

Out of the day and night
A joy has taken flight;
Fresh spring, and summer, and winter hoar,
Move my faint heart with grief, but with delight
No more—Oh, never more!

End-Stopped Lines in Dickinson's "Fame is a bee."

Dickinson's use of punctuation is a bit unusual (she uses dashes to replace many different types of punctuation), so her poems make for an interesting example of end-stopped lines. Since the punctuation is nonstandard, it might not always be clear what kind of pause is supposed to come at the end of a line, but even so it is clear in this stanza that each line is its own complete sentence, grammatically independent from what comes before and after.

Anne Carson is a contemporary poet who writes in free verse. Here is a passage from her long poem "The Glass Essay," in which every line is end-stopped.

It is as if we have all been lowered into an atmosphere of glass.
Now and then a remark trails through the glass.
Taxes on the back lot. Not a good melon,

too early for melons.
Hairdresser in town found God, closes shop every Tuesday.
Mice in the teatowel drawer again.

C.K. Williams is known for his use of very long, grammatically complex lines. He often end-stops these long lines. This can be helpful for a reader: since the lines themselves are so long and complex, it's nice to come to a place of rest and resolution at the end of a line. In this example, Williams uses end-stop in lines 2 and 3, providing a moment for the reader to pause and contemplate the horror he describes.

Some dictator or other had gone into exile, and now reports were coming about his regime,
the usual crimes, torture, false imprisonment, cruelty and corruption, but then a detail:
that the way his henchmen had disposed of enemies was by hammering nails into their skulls.
Horror, then, what mind does after horror, after that first feeling that you’ll never catch your breath,
mind imagines—how not be annihilated by it?—the preliminary tap, feels it in the tendons of the hand,
feels the way you do with your nail when you’re fixing something, making something, shelves, a bed;
the first light tap to set the slant, and then the slightly harder tap, to em-bed the tip a little more ...

Why Do Writers Use End-Stopped Lines?

Generally speaking, the ends of lines are a natural place for syntactic units to conclude in poetry because line breaks already suggest a pause. Because of this, end-stopped lines are used in most poetry. However, that doesn't mean that it's all that common for every line of a poem to be end-stopped. More typical is that some lines of a poem are end-stopped, while others aren't.

In terms of a single line of a poem, some reasons a poet might choose to end-stop it are:

When end-stopped lines are used together in sequence—one after another—it can make the poem feel somewhat slower or heavier because all the pauses are doubly-accentuated through punctuation and line breaks. Enjambment, by contrast, often has the opposite effect—of speeding up the poem, since one line runs-on into the next instead of getting resolved at the end. But end-stopped lines don't always feel heavy or clunky. Just as often, the regularity of the pauses at the ends of lines can help listeners or readers to understand the information being presented in the poem, since end-stopping has a way of breaking the poem up into more comprehensible units. 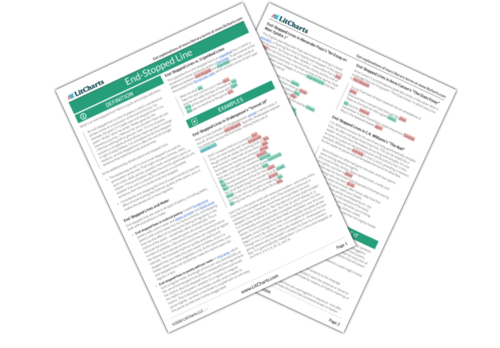