What is characterization? Here’s a quick and simple definition:

Some additional key details about characterization:

Here's how to pronounce characterization: kar-ack-ter-ih-zey-shun

In direct characterization, the author directly describes a character's qualities. Such direct description may come from a narrator, from another character, or through self-description by the character in question. For instance, imagine the following dialogue between two characters:

"Oh, no. Sam's the worst. He acts nice when you first meet him, but then he'll ask you for money and never return it, and eat all your food without any offering anything in return, and I once saw him throw a rock at a puppy. Thank God he missed."

It's worth noting that indirect characterization has an additional layer in any art form that involves actors, including film, theater, and television. Actors don't just say the words on the script. They make choices about how to say those words, how to move their own bodies and in relation to other character. In other words, actors make choices about how to communicate all sorts of indirect details. As a result, different actors can portray the same characters in vastly different ways.

For instance, compare the way that the the actor Alan Bates plays King Claudius in this play-within-a-play scene from the 1990 movie of Hamlet, versus how Patrick Stewart plays the role in the same scene from a 2010 version. While Bates plays the scene with growing alarm and an outburst of terror that reveals his guilt, Stewart plays his Claudius as ice cold and offended, but by no means tricked by Hamlet's little play-within-a-play into revealing anything.

Round and Flat Characters

Characters are often described as being either round or flat.

Whether a character is round or flat depends on their characterization. In some cases, an author may purposely create flat characters, particularly if those characters will appear only briefly and only for a specific purpose. A bully who appears in a single scene of a television show, for instance, might never get or need more characterization than the fact that they act like a bully.

But other times authors may create flat characters unintentionally when round characters were necessary, and such characters can render a narrative dull, tensionless, and unrealistic.

Some types of characters appear so often in narratives that they come to seen as archetypes—an original, universal model of which each particular instance is a kind of copy. The idea of the archetype was first proposed by the psychologist Carl Jung, who proposed that there were twelve fundamental "patterns" that define the human psyche. He defined these twelve archetypes as the:

While many have disagreed with the idea that any such twelve patterns actually psychologically define people, the idea of archetypes does hold a lot of sway among both those who develop and analyze fictional characters. In fact, another way to define round and flat character is to think about them as they relate to archetypes:

Good characterization often doesn't involve an effort to avoid archetype altogether—archetypes are archetypes, after all, because over human history they've proved to be excellent subjects for stories. But successful authors will find ways to make their characters not just archetypes. They might do so by playing with or subverting archetypes in order to create characters who are unexpected or new, or more generally create characters whose characterization makes them feel so unique and individual that their archetype feels more like a framework or background rather than the entirety of who that character is.

The famous literary critic Harold Bloom has argued in his book The Invention of the Human that "Personality, in our sense, is a Shakespearean invention." Whether or not you agree with that, there's no doubting that Shakespeare was a master of characterization. One way he achieved such characterization was through his characters delivering soliloquies. The excerpt of a soliloquy below is from Hamlet, in which Hamlet considers suicide:

To be, or not to be? That is the question—
Whether ’tis nobler in the mind to suffer
The slings and arrows of outrageous fortune,
Or to take arms against a sea of troubles,
And, by opposing, end them? To die, to sleep—
No more—and by a sleep to say we end
The heartache and the thousand natural shocks
That flesh is heir to—’tis a consummation
Devoutly to be wished! To die, to sleep.
To sleep, perchance to dream—ay, there’s the rub,
For in that sleep of death what dreams may come
When we have shuffled off this mortal coil,
Must give us pause.

Hamlet's soliloquy is not simply him saying what he thinks. As he delivers the soliloquy, he discovers what he thinks. When he says "To die, to sleep. To sleep," he is all-in on the idea that suicide is the right course. His words "perchance to dream" flow directly out of his thoughts about death as being like "sleep." And with his positive thoughts of death as sleep, when he first says "perchance to dream" he's thinking about having good dreams. But as he says the words he realizes they are deeper than he originally thought, because in that moment he realizes that he doesn't actually know what sort of dreams he might experience in death—they might be terrible, never-ending nightmares. And suddenly the flow of his logic leaves him stuck.

In showing a character experiencing his own thoughts the way that real people experience their thoughts, not as a smooth flow but as ideas that spark new and different and unexpected ideas, Shakespeare gives Hamlet a powerful humanity as a character. By giving Hamlet a soliloquy on the possible joy of suicide he further captures Hamlet's current misery and melancholy. And in showing how much attention Hamlet pays to the detail of his logic, he captures Hamlet's rather obsessive nature. In other words, in just these 13 lines Shakespeare achieves a great deal of characterization.

Characterization in The Duchess of Malfi

In his play the The Duchess of Malfi, John Webster includes an excellent example of direct characterization. In this speech, the character Antonio tells his friend about Duke Ferdinand:

The Duke there? A most perverse and turbulent nature;
What appears in him mirth is merely outside.
If he laugh heartily, it is to laugh
All honesty out of fashion.
…
He speaks with others' tongues, and hears men's suits
With others' ears; will seem to sleep o’th' bench
Only to entrap offenders in their answers;
Dooms men to death by information,
Rewards by hearsay.

Ferdinand directly describes the Duke as deceitful, perverse, and wild, and as a kind of hollow person who only ever laughs for show. It is a devastating description, and one that turns out to be largely accurate.

Characterization in The Great Gatsby

Here's another example of direct characterization, this time from The Great Gatsby. Here, Nick Carraway, the narrator of the novel, describes Tom and Daisy Buchanan near the end of the novel.

They were careless people, Tom and Daisy—they smashed up things and creatures and then retreated back into their money or their vast carelessness, or whatever it was that kept them together, and let other people clean up the mess they had made.

But The Great Gatsby, like essentially all other literature, doesn't solely rely on direct characterization. Here is Nick, earlier in the novel, describing Gatsby:

He stretched out his arms toward the dark water in a curious way, and, far as I was from him, I could have sworn he was trembling. Involuntarily I glanced seaward—and distinguished nothing except a single green light, minute and far away, that might have been the end of a dock.

This is an example of indirect characterization. Nick isn't describing Gatsby character directly, instead he's describing how Gatsby is behaving, what Gatsby is doing. But that physical description—Gatsby reaching out with trembling arms toward a distant and mysterious green light—communicates fundamental aspects of Gatsby's character: his overwhelming yearning and desire, and perhaps also the fragility inherent such yearning.

Why Do Writers Use Characterization?

Such characteristics in turn make characters seem realistic and also help to drive the action of the plot, as a plot is often defined by the clash of actions and desires of its various characters. 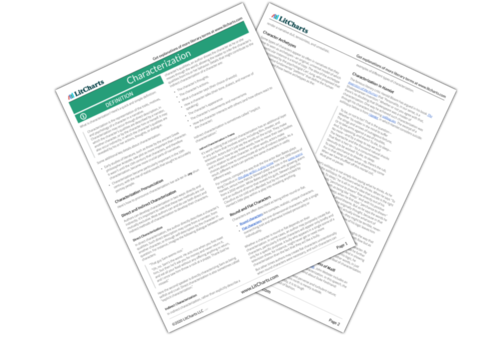