What is a dynamic character? Here’s a quick and simple definition:

A dynamic character undergoes substantial internal changes as a result of one or more plot developments. The dynamic character's change can be extreme or subtle, as long as his or her development is important to the book's plot or themes. For instance, at the beginning of To Kill a Mockingbird the main character, Scout, is a young girl who, like most young kids, is generally self-focused and lacking in empathy, as evidenced by her voyeuristic curiosity in her strange neighbor Boo Radley. By the end of the novel, after seeing the impact of poverty, racism, and other injustices, she has grown and is able to see the world from Boo Radley's point of view.

The host of the radio show (and podcast) "This American Life," Ira Glass, is a master storyteller who is known to give preference to stories in which the main character undergoes some sort of change as a consequence of the story's events. In other words, one of his primary criteria in identifying good stories is: are at least some of the characters dynamic? Dynamic characters are widely thought to be a key ingredient in crafting compelling narratives, because they make the audience more invested—not only in the arc of the storyline, but in the arc of a character's development.

If you take a look at the LitCharts entry on plot, you'll quickly notice that many of the most common plot structures used in literature depend on the main character undergoing some type of growth or transformation as a consequence of their experiences (such as the coming of age story). In other words, these plots rely on the main character being dynamic.

Learning to spot a dynamic character is much easier when you understand its opposite, the static character:

It's important to note that static characters are not necessarily one-dimensional, unrealistic, or ultra-simplistic (that's what's known as a "flat character"). On the contrary, static characters can still be interesting and complex—they simply don't undergo internal transformations or changes over the course of a story, as a dynamic character does.

How to Spot a Dynamic Character

Sometimes it can be hard to tell whether a character is dynamic—or simply well-written, lifelike, or complex. Here are a few things to look for when trying to determine if a story contains a dynamic character:

It's worth noting that sometimes new information is revealed about a character in the middle of the story—that they have a shady past or are secretly a prince, for instance. Such new information don't necessarily mean that they've undergone a change in the course of the story, even if the revelation changes the way the reader or other characters perceive the character. Only genuine internal change can make a character dynamic.

Dynamic Character vs. Round Character

In his book Aspects of the Novel, E. M. Forester coined the term "round character," a term now widely used to describe complex and realistic characters. The term round character is often used interchangeably with dynamic character, but this is a mistake. There are important differences between the two.

In Daisy Miller, Two American expatriates, Frederick Winterbourne and Annie "Daisy" Miller, meet in Switzerland. Winterbourne is taken with Daisy and attempts to court her, but after he gets to know her he comes to the conclusion that she's a frivolous girl and a flirt. Even so, Winterbourne can't help but remain intrigued by Daisy when they run into each other again in Italy, where Daisy has become intimate with a young Italian man from a lower-class background. Winterbourne chastises Daisy for her behavior, which he sees as improper. A few days after Winterbourne rebukes her, Daisy falls ill and eventually dies, causing Winterbourne to question his harshness, and to regret how quickly he dismissed Daisy.

Daisy's character does not change in any substantial way over the course of the book; she's a free spirit who maintains her disregard for social norms from beginning to end—so she would be considered a static character. Winterbourne, on the other hand, reevaluates his preconceived notions about world in the aftermath of Daisy's death, so he is a dynamic character.

Morrison's The Bluest Eye tells the story of Pecola, a young black girl who believes she is ugly and is abused and raped by her father. Pecola goes to live with the family of another girl, named Claudia, but she continues to be mistreated by classmates, adults, and others. The story is told from Claudia's perspective, but switches intermittently from her perspective as a child to her perspective as an adult, looking back on her life. As a child, Claudia doesn't fully comprehend the impact that racism has on her and the other young, black girls in her community. But as an adult, Claudia thinks she understands why people in her community were so cruel toward Pecola: they saw her pain and used her as a scapegoat to feel better about themselves. By the end of the story, Pecola has gone mad, and believes that she has finally received the blue eyes she has always wanted.

Claudia and Pecola are both dynamic characters. The changes Claudia goes through are highlighted by the shifts in Claiudia's childhood to adult perspective that take place throughout the book, giving the reader contrasting views of her innocence and naïvety as a child, to her wisdom and awareness as an adult. The changes Pecola's character goes through function in another way: the pain and cruelty she endures over the course of the book drive her to madness.

In the short story A&P, a young cashier named Sammy watches a group of young women walk into the grocery story where he works. All of the women are wearing swimsuits, and Sammy watches them walk up and down the aisle. The store manager eventually asks the women not to come back to the grocery store without clothes on over their swimsuits, causing them to blush and look ashamed. Watching the interaction, Sammy grows angry. Wanting to impress the women, he stands up for them and quits, right there on the spot. But even after the women have left and are no longer within earshot, Sammy follows through on the threat and quits his job. The reader knows that this is a moment of change for Sammy, although the story is too short to have a clear understanding of how profound the change will be. Sammy concludes by saying "...my stomach kind of fell as I felt how hard the world was going to be to me hereafter."

Although the precise nature and outcome of Sammy's transformative experience can be debated, it's clear that he is a dynamic character because he is shaped and moved by his environment. He had no intention of quitting until the story's primary conflict took place (with the manager scolding of the group of women), and after quitting he has a new understanding of the harshness of the world and his own precarious place within it.

Why do Writers Use Dynamic Characters?

There are variety of reasons a writer might include a dynamic character in a story. Here are a few of the most common ones: 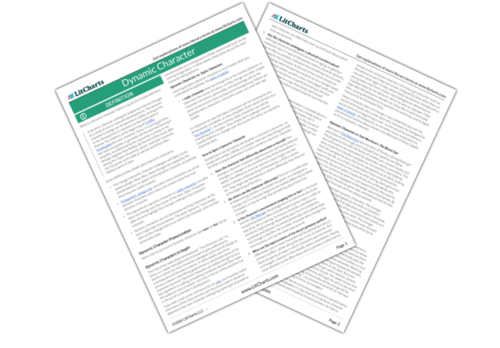