What is alliteration? Here’s a quick and simple definition:

Alliteration is a figure of speech in which the same sound repeats in a group of words, such as the “b” sound in: “Bob brought the box of bricks to the basement.” The repeating sound must occur either in the first letter of each word, or in the stressed syllables of those words.

Some additional key details about alliteration:

How to Pronounce Alliteration

Here's how to pronounce alliteration: uh-lit-uh-ray-shun

Understanding the Rules of Alliteration

Alliteration is complicated enough, and there are enough misconceptions about it, that it’s worth taking a closer look at the rules that cover how alliteration works.

This example is alliterative because the “c” and “k” produce the same sound even though they are different letters.

So which side is right? The short answer is that both definitions of alliteration are currently accepted. But, not so long ago, only the stressed-syllable version of alliteration was considered legitimate. Even today many people who really care about alliteration—poets, for instance—would insist that the stressed syllable viewpoint is correct.

While alliteration nowadays most often refers to repetition of the sounds of consonant, vowels can alliterate. For instance, “American alliteration” is alliterative. That said, "open octagon" isn't really alliterative because the "o" makes different sounds in those two words.

Alliteration sticklers may contest that the best use of alliteration takes into consideration how certain combinations of consonants affect the resulting sounds. For instance, they might argue that the example “Sam speeds with skill through the storm” is not alliterative because the clusters of “sp,” “sk,” and “st” have their own distinct sounds and therefore don’t alliterate with each other or with a single “s.” This is not a hard and fast rule by a long shot (and we have an example below from none other than Charles Dickens that actually does alliterate with “st” and “sp”) but the way that consonant clusters can affect the degree of alliteration is still worth knowing about.

Alliteration vs. Consonance vs. Assonance

There are two close relatives of alliteration, both of which are often confused with each other and with alliteration itself. They are consonance and assonance. Here are quick descriptions of each:

Alliteration, then, is a specialized form of assonance or consonance in which the repeated sounds occur only on stressed syllables.

Alliteration appears all over the place. It is used very often in lyric poetry, and appears regularly in novels, plays, and other literature. It’s also very common in more commercial writing, such as marketing taglines, brand names, and even in naming superheroes.

Alliteration is common in poetry, as well as in literature ranging from from Shakespeare to Stephen King. Below are some examples.

Alliteration in the Prologue to Romeo and Juliet

This example from lines 5-6 of the Prologue of Romeo and Juliet has two sets of alliteration, one with “f” sounds and one with “l” sounds.

This example from the poem “birches” by Robert Frost includes an alliteratively intense repetition of “b” sounds in every line, and often multiple times per line.

I'd like to go by climbing a birch tree,
And climb black branches up a snow-white trunk
Toward heaven, till the tree could bear no more,
But dipped its top and set me down again.
That would be good both going and coming back.
One could do worse than be a swinger of birches.

Alliteration in John Keats’s “Ode to a Nightingale”

In these lines from stanza 7, lines 5-10 of John Keats’s famous “Ode to a Nightingale,” there are alliterations of both “s” and “f” sounds.

Perhaps the self-same song that found a path
Through the sad heart of Ruth, when, sick for home,
She stood in tears amid the alien corn;
The same that oft-times hath
Charm'd magic casements, opening on the foam
Of perilous seas, in faery lands forlorn.

Alliteration in Charles Dickens’ A Tale of Two Cities

The alliteration of “s” sounds in the example below comes from Part 1, Chapter 5 of Charles Dickens’ novel A Tale of Two Cities. The alliteration, which in each case has the sibilant “s” followed by a harder consonant (either a “p” or a “t”) creates a sound almost of something soft splashing against something hard, which is exactly what Dickens is describing here: blood hitting the hard surface of the street.

“The time was to come, when that wine too would be spilled on the street-stones, and when the stain of it would be red upon many there.”

In this sample from Part 1, Chapter 9 of her novel Beloved, Toni Morrison intertwines alliteration on the “d,” “l,” “b,” “p,” and “h” sounds. Notice how the “l” sound repeats throughout the entire passage and occurs between the alliteration of the other sounds, which is a good example of how alliterative words don’t always have to occur sequentially to qualify as alliteration.

The dark, dark liver – love it, love it and the beat and beating heart, love that too. More than eyes or feet. More than lungs that have yet to draw free air. More than your life-holding womb and your life-giving private parts, hear me now, love your heart.

Marketing copywriters often use alliteration because it can help make phrases and sentences fun to say and easy to remember, perfect for taglines, such as:

Alliteration is also a tool that many companies use in their branding, so that their names roll off the tongue more easily and stick in your head. For example:

The number of superheroes or supervillains whose names (super-names or alter ego names) are alliterative is frankly astounding. To name just a few:

It makes sense when you think about it. Every superhero is like a brand, created by comic-book folks to sound cool and stick in your mind. (That’s also why characters like Mickey Mouse and Donald Duck are alliteratively named). Alliteration, you might say, is the real superhero.

Just as poets use alliteration for its lyricism and beauty, songwriters in every genre from folk to rap use it to create stylistic effects in their lyrics.

Alliteration in “Hello” by Adele

I've forgotten how it felt before the world fell at our feet.

He not busy being born is busy dying.

Alliteration in “Rap God” by Eminem

So I wanna make sure, somewhere in this chicken scratch I
Scribble and doodle enough rhymes
To maybe try to help get some people through tough times
But I gotta keep a few punchlines
Just in case, ‘cause even you unsigned
Rappers are hungry looking at me like it's lunchtime…

Alliteration in “Waiting on the World to Change” by John Mayer

Alliteration in “All I Want” by Joni Mitchell

Why Do Writers Use Alliteration?

Writers use alliteration, with its emphasis on sound and rhythm, for a variety of different reasons:

Alliteration is especially popular in poetry, which is distinct in its emphasis on sound and rhythm. For example, take a look at the astonishing amount of alliteration in the final stanza of Edgar Allen Poe’s most famous poem, “The Raven”:

And the Raven, never flitting, still is sitting, still is sitting
On the pallid bust of Pallas just above my chamber door;
And his eyes have all the seeming of a demon's that is dreaming,
And the lamp-light o'er him streaming throws his shadow on the floor;
And my soul from out that shadow that lies floating on the floor
Shall be lifted—nevermore!

The onslaught of alliteration on the “fl”, “s”, “p”, “d”, and “l” sounds makes the poem feel musical but also overwhelming and mesmerizing, which is precisely what Poe was going for in his poetic tale of a phantasmagorical raven that visits a grieving man who seems to be uncertain if he is awake or asleep. 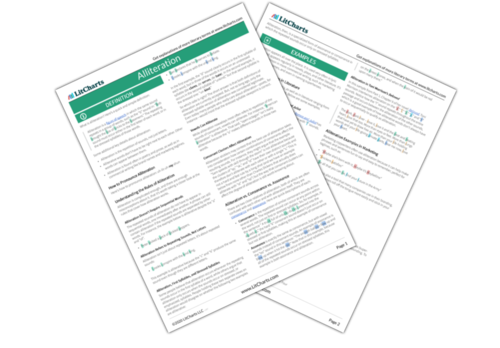