What is the climax of a plot? Here’s a quick and simple definition:

The climax of a plot is the story's central turning point—the moment of peak tension or conflict—which all the preceding plot developments have been leading up to. In a traditional "good vs. evil" story (like many superhero movies) the climax is typically the moment when the hero finally confronts or does battle with the villain. However, climaxes are not always so easy to spot. For instance, there's widespread disagreement as to whether the climax of Romeo and Juliet occurs in the middle of the play, when Romeo kills his rival Tybalt in a big showdown and then must flee Verona, or at the end of the play, when Romeo finds Juliet unconscious and, thinking her dead, kills himself by drinking poison.

Some additional key details about climax:

Here's how to pronounce climax: cly-max

Finding the Climax of a Plot

Plot is a key element of novels, plays, most works of nonfiction, and many (though not all) poems. While not all works that have plots also have a climax, most do. Here are a few of the key defining features of climax to help you identify it:

It's Not Always Easy to Identify the Climax

While many stories have a clear climax, not all stories do. As the example of Romeo and Juliet makes clear, it may not be possible to definitively identify the point of climax in a story, since there might be several points at which it seems like the height of tension or conflict has been reached.

One of the first and most influential people to create a framework for analyzing plots was 19th-century German writer Gustav Freytag, who argued that all plots can be broken down into five stages: exposition, rising action, climax, falling action, and dénouement. Freytag originally developed this theory as a way of describing the plots of plays at a time when most plays were divided into five acts, but his five-layered "pyramid" can also be used to analyze the plots of other kinds of stories, including novels, short stories, films, and television shows. Here's the pyramid as originally defined by Freytag:

One important thing to note about the shape of Freytag's pyramid is that climax falls in the very center of the diagram, but this is actually a bit misleading, since the climax usually doesn't occur in the middle of most narratives. Rather, the climax typically occurs somewhere around the three-quarter mark. Therefore, a slightly modified version of Freytag's pyramid (with a more accurate placement of the climax) might look something like this:

While Freytag's pyramid is very handy, not every work of literature fits neatly into its structure. In fact, many modernist and post-modern writers intentionally subvert the standard narrative and plot structure that Freytag's pyramid represents. We mention this here because climax is often spoken about in relation to other parts of Freytag's pyramid, and because understanding where the climax typically occurs within a narrative may help you identify it.

Contrary to what many people think, anticlimax is not, strictly speaking, the opposite of climax. Rather, it is one specific type of climax: it's the name given to a climax in which the story's primary tension is dispelled in an unsatisfying manner, or in which the resolution fizzles in comparison to the intensity of the buildup. Imagine if, in the final showdown between a hero and a villain, the hero simply said "Look, a distraction!" and promptly handcuffed the distracted villain. That would be an anticlimax—because the audience would probably be expecting some sort of action-packed showdown, complete with a lengthy exchange of harsh words and some sort of clever twist at the end. An anticlimax may be purposeful or accidental:

Christopher Marlowe's play Doctor Faustus is a story with an obvious climax. The play centers around Doctor Faustus, a professor who makes a pact with Lucifer (i.e., the devil): Faust agrees to give his soul to Lucifer, on the condition that he gets 24 years of unlimited power and knowledge. Of course, the deal turns out to have been a bad idea, and the play climaxes in act 13, when, with tension mounting, the hour of Faustus's death and damnation draws near. His cries of regret for having sold his soul to Lucifer and his pleas for more time are unsuccessful, and devils drag him away to Hell.

Climax in Death in Venice

Thomas Mann's novel Death in Venice tells the story of a famous German writer named Aschenbach, who takes a break from his work and travels to Venice. At his hotel in Venice, on the night of his arrival, he sees a young boy having dinner with his family. Aschenbach thinks the boy is "perfectly beautiful," and over the course of the next few days he grows more and more obsessed with the boy, whose name he discovers is Tadzio. Aschenbach's mind becomes consumed by an overpowering desire to win Tadzio's affection. One day, in an effort to appear younger, Aschenbach dyes his gray hair, puts on makeup, and buys new clothes. The book's climax occurs at the point when Aschenbach's break with reality seems to have become complete: wearing his new clothes and makeup, Aschenbach openly stalks Tadzio through the streets of Venice, where, having become delirious in the heat of a city square and possibly from a disease that seems to be overtaking Venice, he begins talking as if he is Socrates.

This story serves as a good example of a climax in which the height of tension has more to do with the main character's internal state than it does with the "action" that surrounds him. Aschenbach continues to slip further into madness and illness until he eventually dies, but this scene stands out as the book's climax because it's the point at which Aschenbach's sanity seems to have abandoned him completely.

Climax in The Catcher in the Rye

J.D. Salinger's famous coming-of-age novel, The Catcher in the Rye, centers around the movements and musings of a listless, aimless teenager named Holden Caulfield, who leaves his boarding school after he is expelled and spends the next few days wandering around New York City. Holden describes his various encounters with friends, acquaintances, and strangers until, in the final chapter, he explains that he has been hospitalized (or sent to a "rest home" to recover) without revealing the exact reason or what happened to him.

The story's central tension stems from Holden's increasingly unstable mental state: the book is shadowed by a sense that his depression, paranoia, and general disenchantment with society are all indications of a more serious underlying problem—signs, in other words, that he might be on the verge of some sort of a mental break. This tension builds as Holden begins to feel more and more faint throughout the story, but the story doesn't have a clear climax in the sense of a moment when this tension reaches a crisis or resolution. Therefore, people have offered multiple interpretations of when the climax might be said to occur:

Ultimately, it's not possible to say definitively when the climax of The Catcher in the Rye occurs, but that doesn't mean that just any scene from the book could reasonably be called the climax. The passages above are a few of the more likely contenders for the moment of "peak tension."

Climax in Man's Search for Meaning

Man's Search for Meaning is a work of nonfiction by Victor Frankl, who recounts his time spent in Nazi concentration camps during the second World War. The book does not have a traditional narrative arc, as it slips between Frankl's vivid descriptions of life in a concentration camp and his more philosophical reflections on the meaning of life. Therefore, even though the book has many elements of a traditional narrative, it's difficult to identify a clear climax.

The book's primary theme is that the need to find some kind of meaning in one’s existence is at the core of human psychology. Accordingly, one of the most important moments in the book includes Frankl's decision to rewrite a manuscript that was confiscated when he arrived at Auschwitz: his life's work, the subject of the book was "logotherapy," or this concept of an inner pull to find a meaning in life. Frankl's decision to rewrite the manuscript could be considered a type of climax, but in a book such as this there are many moments the could be pointed to as moments of peak tension or conflict, so there is no definitive climax.

Climax in The Rime of the Ancient Mariner

Here's an example of climax in poetry, from Samuel Taylor Coleridge's The Rime of the Ancient Mariner. The poem tells the story of a Mariner who shoots an albatross (a large sea bird) out of the sky after it has been following his ship for several days. Shortly after the albatross dies, however, the wind disappears down and the mariner's ship becomes stranded in the arctic. The Mariner's shipmates hang the albatross around his neck as a punishment. In the coming days, unable to move without wind, the sailors all die of thirst—except for the Mariner, who is cursed to live among the dead crew.

The poem's climax comes when the Mariner notices beautiful water snakes swimming beside the ship at night. At this moment he becomes inspired, and has a spiritual realization that all of God’s creatures are beautiful and must be treated with respect and reverence. With this realization, the albatross falls from his neck and sinks into the sea. This moment is the turning point, at which the curse upon the Mariner diminishes. However, it is worth noting that the Mariner never entirely escapes his curse—while he ceases to be marooned in the sea, he nonetheless feels an urge to tell his tale to certain people he meets. He becomes a kind of warning against the actions he took against nature and God in originally killing the albatross. So in this case the climax is a turning point, but not one that offers full redemption.

Why Do Writers Use Climax?

Most stories have a climax (or several moments that seem like they might be a climax), and climaxes serve several purposes in a story. A writer might build his or her story toward a climax for any of the following reasons: 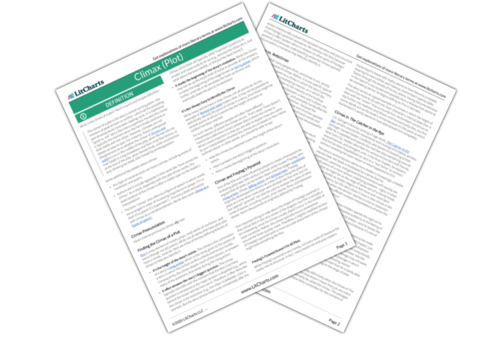