What is paradox? Here’s a quick and simple definition:

Some additional key details about paradox:

Here's how to pronounce paradox: par-uh-docks

The special ability of the figure of speech called paradox—which is to simultaneously seem self-contradictory and yet also reveal unexpected meaning—often depends on words that can be interpreted in more than one way. For instance, in Shakespeare's Hamlet, when Hamlet tells his mother "I must be cruel, only to be kind," he's using a paradox to express that his behavior, while it may appear to be cruel, is actually a form of kindness—but that's only if you interpret kindness to include harsh actions that may be better for everyone in the long run (Hamlet also turns out to be wrong since, by the end of the play, pretty much everyone is dead). This type of paradox, also called verbal paradox or literary paradox, is the type we'll focus on in this entry.

Literary paradox is distinct from logical paradox, in which the meaning of a statement is contradictory in a way that cannot be resolved into sense-making. Here are the differences between literary and logical paradox in more detail:

Put more broadly: rather than using language figuratively to construct a new and unexpected meaning (as in literary paradox), logical paradox actually uses language nonsensically to create the appearance of meaning which upon further review is revealed as hopelessly contradictory and therefore lacking.

Literary paradox is easily confused with two other figures of speech, antithesis and oxymoron. This section outlines how paradox differs from each of these terms.

Paradox appear in all sorts of writing, from literature, to speeches, to song lyrics. The examples below show some of each.

In literature, paradoxes can create humor, express the confusion or frustration of a seeming impossibility, or make clear the absurdity of an unexpected situation.

As Hamlet interrogates his mother, Gertrude, in Act 3 Scene 4 of Hamlet, after mistakenly killing Polonius, he uses a paradox to explain why he has committed such violent actions and why he has been berating his mother for remarrying Claudius (the brother of Hamlet's father). With this paradoxical statement, Hamlet is attempting to persuade his frightened mother that although he seems wicked in this moment, his intentions are good.

I must be cruel, only to be kind.

In the first scene of Shakespeare's famous tragedy, Romeo and Juliet, Romeo has not yet met Juliet and is still heartbroken over his first crush, Rosalind. Shakespeare expresses the whirling confusion of his emotions in this moment with a series of oxymorons and paradoxes.

Alas, that love, whose view is muffled still,
Should, without eyes, see pathways to his will!
Where shall we dine?—O me! What fray was here?
Yet tell me not, for I have heard it all.
Here's much to do with hate but more with love.
Why, then, O brawling love! O loving hate!
O any thing, of nothing first create!
O heavy lightness! serious vanity!
Mis-shapen chaos of well-seeming forms!
Feather of lead, bright smoke, cold fire, sick health!
Still-waking sleep, that is not what it is!
This love feel I, that feel no love in this...

The first paradox suggests Romeo's seemingly contradictory wish that a love that is "blind" should nevertheless see a path to accomplish its desires. The second paradox references a central theme of the play: the idea of love and hatred coinciding (remember that the play is about children from warring families falling in love?). The third paradox expresses Romeo's exasperation that such beautiful things could come together to make such a mess. After a number of oxymorons—which express Romeo's sense of confusion in love—the final paradox is Romeo's expression of sorrow that his feeling of love is unrequited.

In his dystopian novel 1984, George Orwell imagines a totalitarian government designed on purpose to have contradictory claims at its very core. These contradictions are examples of paradox:

War is peace.
Freedom is slavery.
Ignorance is strength.

The general population of this dystopian future seems numb to the contradiction inherent in this phrase, and this is part of why Orwell sees this society as so dangerous. In it, language no longer has meaning on its own—rather, the ruling party has gained and maintained power to wage constant war, enforce absolute obedience, and nurture general ignorance precisely by annihilating meaning in language so that there is nothing left for any citizen to hold on to or to trust.

Paradox in Walt Whitman's "Song of Myself"

In this poem, Walt Whitman famously welcomes the idea that he might be indulging himself in paradoxes, writing "Do I contradict myself?/Very well then, I contradict myself/I am large, I contain multitudes." Paradox is, in fact, a major feature of the poem, as you'll see in this excerpt:

Whitman's writing proposes values that are at odds with those of his culture, and the paradoxes here help to highlight the radical nature of his ideas. Whitman believes that all people, however poor (or "pocketless of a dime"), are capable of 'buying' whatever they please ("the pick of the earth"). He states that the sight of something as insignificant as a bean can reveal more knowledge than a lifetime of schooling. Whitman's paradoxes invite the reader to reconsider what he or she believes to be important.

In his play Man and Superman, Shaw uses his protagonist Jack Tanner to express many of his own unconventional ideas about society. One of the tenets in a book carried by Tanner comes in the form of a witty paradox:

This statement undermines the sanctity of the traditional "golden rule" (i.e., "do unto others as you'd have them do unto you"), suggesting a more flexible worldview. It creates a paradox, however, since a golden rule against golden rules would seem to defeat its own authority! This makes it similar to the classic "liar's paradox" from logic: "this sentence is a lie."

In Invisible Man, Ellison's protagonist grapples with what it means to be black in predominantly white, racist America. He is haunted by the paradoxical advice of his grandfather, who tells him to "overcome 'em with yeses, undermine 'em with grins, agree 'em to death and destruction..." In other words, the grandfather suggests that the best way to break the power of the white majority is precisely to submit to it. Another paradox arises when the protagonist is promoted to chief spokesman of the Brotherhood in Harlem, and Master Jack describes  the position:

"You will have freedom of action—and you will be under strict discipline to the committee."

This restrained freedom creates a paradox, which ultimately leads the protagonist to decide to leave behind all institutions, as he comes to realize that all groups will require him to sacrifice his freedom and identity to their cause.

Paradox also appears in great political speeches, whose key phrases have survived the test of time in the public imagination.

In his first inaugural address, Roosevelt spoke about the challenges facing the United States as a result of the Great Depression. One of the most famous lines from his speech is so memorable in part because it creates a paradox:

So, first of all, let me assert my firm belief that the only thing we have to fear is fear itself...

With this optimistic message, Roosevelt hoped to unite the struggling nation against a common enemy (fear), all the while asserting the invincibility of the American nation. Every challenge facing the nation could be defeated, Roosevelt argued, as long as its citizens could believe in themselves and vanquish fear.

A well-placed paradox can make song lyrics memorable and give them a greater depth of meaning, asking listeners to think twice as they sing along to a catchy tune.

Paradox in Nick Lowe and Ian Gromm's "Cruel to Be Kind"

Nick Lowe and Ian Gromm borrow a turn of phrase from Shakespeare's Hamlet, cited above, in their co-written song "Cruel to Be Kind." Like Hamlet, the speaker here is trying to argue that a little cruelty can be a sign of love, a sentiment that also echoes the paradoxical blending of love and hate in Romeo and Juliet.

Why Do Writers Use Paradox?

Paradoxes are helpful for capturing the sometimes bewildering duality of life. A writer might choose to employ paradox for various reasons, including: 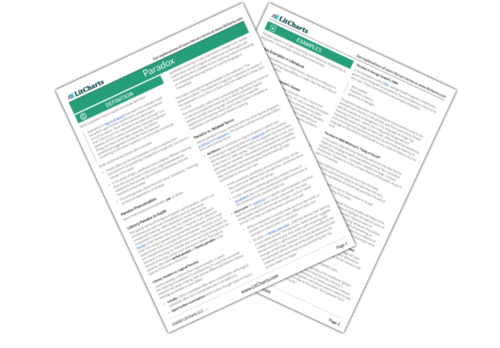