What is a static character? Here’s a quick and simple definition:

A character is said to be "static" if they do not undergo any substantial internal changes as a result of the story's major plot developments. Antagonists are often static characters, but any character in a story can be static. For instance, in Romeo and Juliet, it can be argued that Romeo is a static character: he's defined by his impulsiveness and emotionally volatility, and rather than changing these traits, he ultimately dies because of them.

How to Pronounce Static Character

Most stories contain more static characters than dynamic characters. A novel that has fifteen characters, for instance, probably won't focus on the arc of each character's development—and it probably shouldn't: not only would it be a huge undertaking, but in most cases the main events of a story simply don't impact every character in a way that changes them substantially. This is especially true for minor characters: if a character only appears once, or in brief scenes, it's difficult for a writer to establish who the character is and what they stand for, let alone to show how that might be changing. Instead, stories that have dynamic characters—and not all stories do—usually focus on showing how one, or a handful, of the story's characters undergo a significant change, while the rest of the characters in the story are static.

Learning to spot a static character is much easier when you understand its opposite, dynamic character:

Dynamic characters are widely thought to be a key ingredient in crafting compelling narratives, because they make the audience more invested—not only in the arc of the storyline, but in the arc of a character's development. However, calling a character dynamic does not necessarily mean that they are compelling or complex (the term for that is "round character"); it simply means that they undergo a change.

How to Spot a Static Character

Here are few things to look for when trying to determine if a story contains a static character:

In his book Aspects of the Novel, E. M. Forester coined the term "flat character," which is now widely used to describe one-dimensional characters who lack nuance and emotional depth. The term flat character is often used interchangeably with static character, but this is a mistake. In fact, the term "flat" describes a completely different aspect of a character than the term "static" does:

The best way to better understand static characters is to look at a few examples from literature. Static characters are often antagonists or minor characters—but of course, this isn't always the case, as you'll see in the examples below.

Charles Dickens' novel Great Expectations centers around a dynamic character, but one of the most important secondary characters is static, and serves an important role in helping the reader recognize the dynamic character's transformation. The novel begins with Pip, a young orphan who is sent to live with his sister and her husband, Joe. Pip's sister treats him cruelly, but Joe is kind. Through a series of strokes of good fortune, Pip finds his way out of poverty, but Joe (who is himself a poor blacksmith) continues to pay Pip visits—a fact which embarrasses Pip, who wants to leave his life of poverty behind. As Pip grows into more of a "gentleman," he increasingly avoids Joe, who is, by contrast, unwavering in his friendship and kindness. (For instance, when Pip falls ill, Joe nurses him back to health, and when Pip finds himself with a large debt to pay, Joe pays it.)

Over the course of the book, Pip undergoes a total transformation of character, becoming more and more despicable as he ascends in the ranks of society. Joe is an unchanging character by comparison: until the very end of the book, he remains the kind and generous blacksmith Pip knew as a child, and therefore also serves as a stable point of reference to help readers gauge the extent of Pip's transformation. Pip is a dynamic character, while Joe is static.

Jackson's We Have Always Lived in the Castle tells the story of Merricat Blackwood and her older sister, Constance, who live with their Uncle Julian in an old mansion on a large property just outside of a small village. Years ago, Merricat's mother, father, and other family members were all poisoned while eating dinner, and the villagers believe it was Constance who poisoned and killed them—because she cooked all of the meals. Therefore, when Merricat goes into town, the villagers taunt her, calling her a witch and her sister a murderer. As the narrative progresses, it becomes clear that there's more to the story of the fateful dinner, but the reader can't be entirely sure who actually poisoned the family, because Merricat is an unreliable narrator: she has an innocent, childish sensibility that enables her to live in a fantasy world of her own creation (for instance, she hides objects and nails them to trees with the belief that her "magic" protects Constance and Uncle Julian from the villagers.) One evening their old house catches on fire, but instead of helping extinguish the fire, the villagers seize the opportunity to loot and destroy the home. At the conclusion of the book, the sisters make a shelter out of their ruined home, and the ending implies that they'll always live there—and that the villagers will always fear them.

Merricat's character is consistent. Even after she watches the destruction of all of her prized possessions, she maintains her fanciful ideas about the world. It's important that Merricat is a static character in this novel because the primary theme and focus of this book isn't the main character's psychological development. Instead, Jackson wants readers to consider how people who are seen as different are routinely persecuted, and how easily fear turns to hatred, which leads to violence.

Achebe’s short story, titled “Vengeful Creditor,” is set in an unnamed African country, where the government is undertaking a new initiative to make primary education free for everyone. The story's main character is a vain and materialistic woman named Mrs. Emenike, who hates the government initiative because it has caused three of her servants to quit in order to attend school. When the initiative is eventually halted, a ten-year-old girl named Veronica is crestfallen that she can’t attend school. Young, innocent, and desperate to earn an education however she can, Veronica agrees to work for Mrs. Emenike, who has casually suggested that she might consider sending Veronica to college one day if she does a good job. But after Veronica arrives at the house, it becomes increasingly clear that the family has no intention of sending her to school. She begins to act out in small but increasingly noticeable ways, until one of her acts of defiance puts Mrs. Emenike's child in harm's way—at which point Veronica is beaten and sent back to live in her village.

By the end of the story, there is no indication that Mrs. Emenike has changed her cruel ways or learned anything about the injustice suffered by young women as a result of wealth inequality and government corruption, making her a static (and deeply unsympathetic) character.

Why Do Writers Use Static Characters?

There are variety of reasons a writer might include a static character in a story. Here are a few of the most common ones: 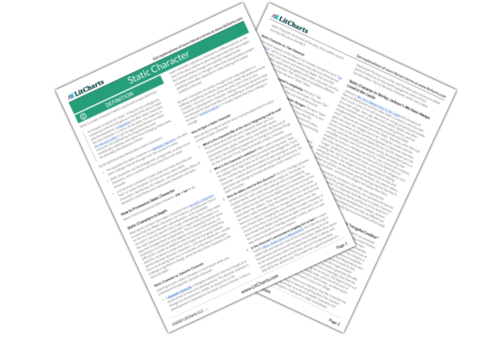