What is litotes? Here’s a quick and simple definition:

Litotes is a figure of speech and a form of understatement in which a sentiment is expressed ironically by negating its contrary. For example, saying "It's not the best weather today" during a hurricane would be an example of litotes, implying through ironic understatement that the weather is, in fact, horrible.

Some additional key details about litotes:

Here's how to pronounce litotes: lie-tuh-teez

There are a number of things you can look for in order to identify whether or not a statement is litotes.

Litotes is Always a Form of Understatement

Litotes is a form of understatement, the intentional presentation of something as smaller, worse, or lesser than it really is. While some phrases might look like litotes at first glance, if they do not contain understatement, then they do not count as litotes. For instance, the expression "leave no stone unturned" contains a double negative and resembles certain examples of litotes (such as, "She wasn't unconvinced"). But there's actually no understatement in "leave no stone unturned," only a command to be thorough.

If the phrase is an understatement, but does not contain negation, then it's not litotes. For example, if you said of a disgusting dish "it's edible," then your assessment would be understatement but not litotes ("It's not inedible" would be the litotic example).

Litotes Usually Works by Negating a Superlative or Extreme Statement

Litotes works by making its understatement obvious. It usually does this by negating a statement that is either extreme or involves words that are superlative, such as "best" or "most." For example, "I'm not starving" uses litotes by negating the extreme word "starving." It communicates that, while you may not be starving, you are in fact pretty hungry. In contrast, it's hard to imagine anyone ever successfully using the sentence "I'm not hungry" as a form of ironic understatement that actually communicates that they are, in fact, hungry. The presence of the extreme word, or of a superlative like "most" or "best" is usually necessary to make litotes work.

Litotes Can Depend on Context

Whether a particular sentence does or doesn't function as litotes can depend on the context in which it's said. Some negative phrases might be litotes in one context, and just a plain old sentence in a different context. For example:

Litotes Can Depend on Intonation and Other Quirks of Speech

Just as the context of a sentence can impact whether a statement is or isn't litotes, so can a speaker's intonation, pauses, or other features of their speech. For instance:

The first sentence above might simply mean that the play was just okay, in which case it is not a case of litotes because it means exactly what it says—it wasn't the best. The second sentence, with its pause and emphasis on "not," though, seems to imply that the play was actually terrible. That second example would be litotes.

Litotes Can Risk Lack of Clarity

A common grievance about litotes is that, since it avoids directness, precision, and clarity, it can obscure what the writer really means to say. For instance, in the sentence, "Ten thousand dollars is not an inconsiderable sum of money," the writer seems to avoid stating that ten thousand dollars is actually a considerable sum of money. The statement might come across as timid or coy rather than direct, which can be frustrating for readers.

Similarly, negative statements in particular can lack clarity because, instead of affirming a truth, they simply negate a possibility. In other words, to say "She wasn't unhappy with her new car," if used as litotes, implies that the recipient of the car was, to some extent, happy. However it's unclear what her exact reaction was: was she just a bit happy, or ecstatic? Litotes, then, allows the speaker to avoid making statements with the precision of a statement in the affirmative (such as, "She was thrilled by the car," or "She was surprised to get a car").

Litotes is a special form of verbal irony. Like litotes, verbal irony is a figure of speech in which the statement expressed is contrary to what is meant (though the true meaning is typically understood by the listener/reader). However, unlike litotes verbal irony does not have to involve understatement or the affirmation of something through the negation of its contrary. For example, after a catastrophic dinner party:

Verbal irony simply has to involve a meaning other than the literal meaning of the stated phrase. Verbal irony can involve sarcasm, overstatement, or understatement. To sum up, then: litotes is a particular type of verbal irony.

Litotes is a common literary device that appears everywhere, from daily conversation and pop culture to literature and political contexts.

Litotes is more common in everyday speech than it is in literature, where examples of litotes are oftentimes so subtle that they go unnoticed.

Litotes in T.S. Eliot's "The Lovesong of J. Alfred Prufrock"

In this excerpt from the iconic poem "The Lovesong of J. Alfred Prufrock" by T.S. Eliot, the self-conscious middle-aged man insists on his insignificance in the world by using litotes:

But though I have wept and fasted, wept and prayed,
Though I have seen my head (grown slightly bald) brought in upon a platter,
I am no prophet—and here's no great matter

In that final sentence, the speaker is using litotes to communicate that he's an ordinary human ("I am no prophet"), and that the subject on which he fixates is insignificant ("here's no great matter"). Further, because the poem comments on the stifled decorum of civilized society, the air of politeness that litotes brings to this passage serves the poem's tone perfectly.

Litotes in Shakespeare's Romeo and Juliet

In an extreme case of understatement, the character Mercutio in Romeo and Juliet ironically understates the size and depth of the wound he's received from Tybalt through litotes.

No, 'tis not so deep as a well nor so wide as a
church-door, but 'tis enough, 'twill serve. Ask for
me tomorrow, and you shall find me a grave man.

The first stanza from Wolfe's 1817 poem arguably contains an example of litotes, depending on how it's read. The poet remarks on the absence of drums, funeral music, and soldiers' farewell shots to suggests a silent, unceremonious burial for "our hero."

Not a drum was heard, not a funeral note,
As his corse to the rampart we hurried;
Not a soldier discharged his farewell shot
O'er the grave where our hero was buried.

By mentioning the absence of these specific sounds, Wolfe draws the reader's attention to them, inviting the reader to at once imagine the sounds (what could have been under different circumstances) even as he makes clear that there were no such sounds at this funeral. While this passage could be read as making an understatement about how silent the funeral was, it could also be read as a simple statement of fact (there were no drums, no music, no firing of guns), in which case it would not be considered an example of litotes.

This excerpt from the memoir The Glass Castle illustrates the subtle way that the irony in litotes can have a cutting, rather than polite, effect.

He looked at the dishes. I knew what he was thinking, what he thought every time he saw a spread like this one. He shook his head and said, "You know, it's really not that hard to put food on the table if that's what you decide to do."

"Now, no recriminations," Lori told him.

Brian, the adult child of negligent parents, uses litotes here to reprimand his parents for failing to perform a task that he considers to be easy. Brian's tone might be less bitter or less sharp if he hadn't used litotes. For example, he could have said, more politely, "feeding a family is easy if you make it a priority."

Litotes is common in daily speech and everyday expressions. Here are some examples, paired with their probable meanings.

Why Do Writers Use Litotes?

Writers use litotes to invoke the absence of a thing or quality, to soften harsh phrases, and sometimes for a bitingly ironic touch.

Litotes Describes Things by Invoking What They Aren't

In litotes, things are somewhat paradoxically described in terms of what they are not. So, when in Beauty and the Beast Belle says of the Beast, "He's no Prince Charming," that phrase conjures Prince Charming in the audience's mind. Litotes, then, involves a sort of verbal sleight of hand, since it both brings a thing to mind and emphasizes its absence. This can be useful when a writer wants to simultaneously call an image or quality into focus and dispel it through negation. For instance, when T.S. Eliot's speaker says "I am no prophet," Eliot intentionally leads the reader to imagine a prophet, even though that's exactly what the speaker claims he isn't.

This effect is especially useful in showing, in literature, what could have been. In Charles Wolfe's poem, the description, "not a drum was heard, not a funeral note," makes the reader see what was, presumably, expected at a British soldier's burial, therefore making vivid the reality of the soldier's fate.

Litotes Can Be Polite

Litotes is often used as a milder, gentler way of navigating requests, criticism, and conversation in general. For instance, the phrase, "I wouldn't say no to a drink" may seem less demanding (though more indirect) than "I'd like a drink." Further, the harsh sound of criticism can often be softened through the use of litotes. For instance, "He's not as young as he used to be" is more tactful than "He's gotten old," and "She isn't exactly a world class chef" takes the edge off the statement "She's a poor cook." This effect is related to euphemism, in which soft or indirect phrasing is used in place of blunt phrasing.

It Can Have a Comic or Snarky Effect

While litotes can be polite, it is also frequently a tool used in comic or snarky statements. "Unfortunately the senator isn't a genius" is an ironic way of insulting a senator's intelligence. Rather than being polite, it's a deliberately snarky and demeaning statement that uses irony and understatement to enhance its bite. So while litotes can help those who want to sound polite, it can also give a cutting edge to those who want to use it to win laughs or insult someone. 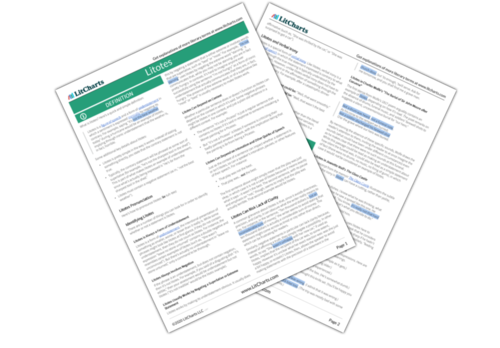