What is dialogue? Here’s a quick and simple definition:

Dialogue is the exchange of spoken words between two or more characters in a book, play, or other written work. In prose writing, lines of dialogue are typically identified by the use of quotation marks and a dialogue tag, such as "she said." In plays, lines of dialogue are preceded by the name of the person speaking. Here's a bit of dialogue from Alice's Adventures in Wonderland:

Some additional key details about dialogue:

How to Pronounce Dialogue

Here's how to pronounce dialogue: dye-uh-log

Dialogue is used in all forms of writing, from novels to news articles to plays—and even in some poetry. It's a useful tool for exposition (i.e., conveying the key details and background information of a story) as well as characterization (i.e., fleshing out characters to make them seem lifelike and unique).

Dialogue as an Expository Tool

Dialogue is often a crucial expository tool for writers—which is just another way of saying that dialogue can help convey important information to the reader about the characters or the plot without requiring the narrator to state the information directly. For instance:

The above example is just one scenario in which important information might be conveyed indirectly through dialogue, allowing writers to show rather than tell their readers the most important details of the plot.

Expository Dialogue in Plays and Films

Dialogue is an especially important tool for playwrights and screenwriters, because most plays and films rely primarily on a combination of visual storytelling and dialogue to introduce the world of the story and its characters. In plays especially, the most basic information (like time of day) often needs to be conveyed through dialogue, as in the following exchange from Romeo and Juliet:

Here you can see that what in prose writing might have been conveyed with a simple introductory clause like "Early the next morning..." instead has to be conveyed through dialogue.

Dialogue as a Tool for Characterization

In all forms of writing, dialogue can help writers flesh out their characters to make them more lifelike, and give readers a stronger sense of who each character is and where they come from. This can be achieved using a combination of:

For example, in Pride and Prejudice, Jane Austen's narrator uses dialogue to introduce Mrs. and Mr. Bennet, their relationship, and their differing attitudes towards arranging marriages for their daughters:

"A single man of large fortune; four or five thousand a year. What a fine thing for our girls!”

“My dear Mr. Bennet,” replied his wife, “how can you be so tiresome! You must know that I am thinking of his marrying one of them.”

“Is that his design in settling here?”

“Design! Nonsense, how can you talk so! But it is very likely that he may fall in love with one of them, and therefore you must visit him as soon as he comes.”

This conversation is an example of the use of dialogue as a tool of characterization, showing readers—without explaining it directly—that Mrs. Bennet is preoccupied with arranging marriages for her daughters, and that Mr. Bennet has a deadpan sense of humor and enjoys teasing his wife.

It's important to note that how a writer uses dialogue changes depending on the form in which they're writing, so it's useful to have a basic understanding of the form dialogue takes in prose writing (i.e., fiction and nonfiction) versus the form it takes in plays and screenplays—as well as the different functions it can serve in each. We'll cover that in greater depth in the sections that follow.

In prose writing, which includes fiction and nonfiction, there are certain grammatical and stylistic conventions governing the use of dialogue within a text. We won't cover all of them in detail here (we'll skip over the placement of commas and such), but here are some of the basic rules for organizing dialogue in prose:

Of course, some writers ignore these conventions entirely, choosing instead to italicize lines of dialogue, for example, or not to use quotation marks, leaving lines of dialogue undifferentiated from other text except for the occasional use of a dialogue tag. Writers that use nonstandard ways of conveying dialogue, however, usually do so in a consistent way, so it's not hard to figure out when someone is speaking, even if it doesn't look like normal dialogue.

In prose, there are two main ways for writers to convey the content of a conversation between two characters: directly, and indirectly. Here's an overview of the difference between direct and indirect dialogue:

Of these two types of dialogue, direct dialogue is the only one that counts as dialogue strictly speaking. Indirect dialogue, by contrast, is technically considered to be part of a story's narration.

A Note on Dialogue Tags and "Said Bookisms"

It is pretty common for writers to use verbs other than "said" and "asked"  to attribute a line of dialogue to a speaker in a text. For instance, it's perfectly acceptable for someone to write:

However, depending on how it's done, substituting different verbs for "said" can be quite distracting, since it shifts the reader's attention away from the dialogue and onto the dialogue tag itself. Here's an example where the use of non-standard dialogue tags begins to feel a bit clumsy:

Dialogue tags that use verbs other than the standard set (which is generally thought to include "said," "asked," "replied," and "shouted") are known as "said bookisms," and are generally ill-advised. But these "bookisms" can be easily avoided by using adverbs or simple descriptions in conjunction with one of the more standard dialogue tags, as in:

In the earlier version, the irregular verbs (or "said bookisms") draw attention to themselves, distracting the reader from the dialogue. By comparison, this second version reads much more smoothly.

Dialogue in plays (and screenplays) is easy to identify because, aside from the stage directions, dialogue is the only thing a play is made of. Here's a quick rundown of the basic rules governing dialogue in plays:

Rolling all that together, here's an example of what dialogue looks like in plays, from Edward Albee's Zoo Story:

JERRY: And what is that cross street there; that one, to the right?

JERRY: And the zoo is around Sixty-5th Street; so, I've been walking north.

PETER: [anxious to get back to his reading] Yes; it would seem so.

The following examples are taken from all types of literature, from ancient philosophical texts to contemporary novels, showing that dialogue has always been an integral feature of many different types of writing.

In this scene from Othello, the dialogue serves an expository purpose, as the messenger enters to deliver news about the unfolding military campaign by the Ottomites against the city of Rhodes.

Messenger
The Ottomites, reverend and gracious,
Steering with due course towards the isle of Rhodes,
Have there injointed them with an after fleet.

First Senator
Ay, so I thought. How many, as you guess?

Messenger
Of thirty sail: and now they do restem
Their backward course, bearing with frank appearance
Their purposes toward Cyprus. Signior Montano,
Your trusty and most valiant servitor,
With his free duty recommends you thus,
And prays you to believe him.

Dialogue in Madeleine L'Engel's A Wrinkle in Time

From the classic children's book A Wrinkle in Time, here's a good example of dialogue that uses a description of a character's tone of voice instead of using unconventional verbiage to tag the line of dialogue. In other words, L'Engel doesn't follow Calvin's line of dialogue with a distracting tag like "Calvin barked." Rather, she simply states that his voice was unnaturally loud.

It's also worth noting that this dialogue helps characterize Calvin as a misfit who embraces his difference from others, and Meg as someone who is concerned with fitting in.

Dialogue in A Visit From the Good Squad

This passage from Jennifer Egan's A Visit From the Good Squad doesn't use dialogue tags at all. In this exchange between Alex and the unnamed woman, it's always clear who's speaking even though most of the lines of dialogue are not explicitly attributed to a speaker using tags like "he said."

Alex turns to the woman. “Where did this happen?”
“In the ladies’ room. I think.”
“Who else was there?”
“No one.”
“It was empty?”
“There might have been someone, but I didn’t see her.”
Alex swung around to Sasha. “You were just in the bathroom,” he said. “Did you see anyone?”

Elsewhere in the book, Egan peppers her dialogue with colloquialisms and slang to help with characterization. Here, the washed-up, alcoholic rock star Bosco says:

"I want interviews, features, you name it," Bosco went on. "Fill up my life with that shit. Let's document every fucking humiliation. This is reality, right? You don't look good anymore twenty years later, especially when you've had half your guts removed. Time's a goon, right? Isn't that the expression?"

In this passage, Bosco's speech is littered with colloquialisms, including profanity and his use of the word "guts" to describe his liver, establishing him as a character with a unique way of speaking.

The following passage is excerpted from a dialogue by Plato titled Meno. This text is one of the more well-known Socratic dialogues. The two characters speaking are Socrates (abbreviated, "Soc.") and Meno (abbreviated, "Men."). They're exploring the subject of virtue together.

Soc. Now, if there be any sort-of good which is distinct from knowledge, virtue may be that good; but if knowledge embraces all good, then we shall be right in think in that virtue is knowledge?

Soc. And virtue makes us good?

Soc. Then virtue is profitable?

Men. That is the only inference.

Indirect Dialogue in Tim O'Brien's The Things They Carried

This passage from O'Brien's The Things They Carried exemplifies the use of indirect dialogue to summarize a conversation. Here, the third-person narrator tells how Kiowa recounts the death of a soldier named Ted Lavender. Notice how the summary of the dialogue is interwoven with the rest of the narrative.

They marched until dusk, then dug their holes, and that night Kiowa kept explaining how you had to be there, how fast it was, how the poor guy just dropped like so much concrete. Boom-down, he said. Like cement.

O'Brien takes liberties in his use of quotation marks and dialogue tags, making it difficult at times to distinguish between the voices of different speakers and the voice of the narrator. In the following passage, for instance, it's unclear who is the speaker of the final sentence:

Why Do Writers Use Dialogue in Literature? 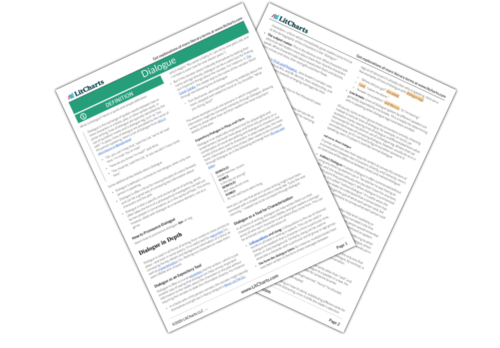