What is a sestet? Here’s a quick and simple definition:

A sestet is a six-line stanza of poetry. It can be any six-line stanza—one that is, itself, a whole poem, or one that makes up a part of a longer poem. Most commonly, the term refers to the final six lines of a sonnet.

Some additional key details about sestets:

How to Pronounce Sestet

Here's how to pronounce sestet: se-stet

Although many different kinds of poems may contain stanzas of six lines, the only types of poems whose forms demand the inclusion of a sestet are sonnets and sestinas. Below are explanations of how sestets are used in each type of poetic form, including some examples.

A sonnet is a type of fourteen-line poem. Traditionally, the fourteen lines of a sonnet consist of an octave (a stanza of eight lines) followed by a sestet (a stanza of six lines). Sonnets generally use a meter of iambic pentameter, and follow a set rhyme scheme. Within these general guidelines for what makes a sonnet, there are many variations, but the sestet is central to all of them.

The typical structure of the sonnet is for the octave to contain what's called a "proposition," which establishes a problem (such as unrequited love) or a question (such as, "does she love me?"). The sestet is concerned with resolving the problem or question, and it almost always contains a "turn," which signals a shift in the poem's focus from problem to resolution. The turn is sometimes also called a "volta" (the Italian word for "turn"), and it usually comes at the very beginning of the sestet, in the sonnet's ninth line.

Example of Sestet in a Sonnet

The following poem by John Milton gives a good example of how the sestet is used in sonnets. As you'll see, the sestet is not differentiated from the rest of the poem by a stanza break (they often aren't), but rather by a shift to a different rhyme scheme (from ABBAACCD in the octave to ABCABC in the sestet) as well as the the "turn" in the ninth line, when the poem shifts from asking a question ("Doth God exact day-labour, light denied?") to answering it (God doth not need / Either man's work or his own gifts...").

When I consider how my light is spent
Ere half my days in this dark world and wide,
And that one talent which is death to hide
Lodg'd with me useless, though my soul more bent
To serve therewith my Maker, and present
My true account, lest he returning chide;
"Doth God exact day-labour, light denied?"
I fondly ask. But Patience to prevent
That murmur, soon replies: "God doth not need
Either man's work or his own gifts; who best
Bear his mild yoke, they serve him best. His state
Is kingly. Thousands at his bidding speed
And post o'er land and ocean without rest:
They also serve who only stand and wait."

It is in large part because the final six lines of the sonnet play such a crucial role in resolving the tension of the poem that they are regarded as a distinct unit from the rest of the poem.

A sestina is an unrhymed poetic form consisting of six sestets followed by a short concluding stanza of three lines called an envoi. The final word of each line of the first stanza is repeated in each stanza throughout the poem at specified intervals, and these same six words are repeated again in the envoi. Sestinas have been written in many different cultures and languages since their invention in the 12th century. In addition to sestina's unique pattern of repeated words, the form's use of multiple sestets is a defining feature of the form.

Example of Sestets in a Sestina

Because sestinas are rather long, this example from John Ashbery's "Farm Implements and Rutabagas in a Landscape" shows just the first two sestets of the sestina. We've marked repeating words with highlights to help you see the pattern according to which the words repeat.

The first of the undecoded messages read: “Popeye sits in thunder,
Unthought of. From that shoebox of an apartment,
From livid curtain’s hue, a tangram emerges: a country.”
Meanwhile the Sea Hag was relaxing on a green couch: “How pleasant
To spend one’s vacation en la casa de Popeye,” she scratched
Her cleft chin’s solitary hair. She remembered spinach

And was going to ask Wimpy if he had bought any spinach.
“M’love,” he intercepted, “the plains are decked out in thunder
Today, and it shall be as you wish.” He scratched
The part of his head under his hat. The apartment
Seemed to grow smaller. “But what if no pleasant
Inspiration plunge us now to the stars? For this is my country.”

Sestets in Other Types of Poems

While sestets are only required by the poetic forms of sonnets and sestinas, they do sometimes occur in other types of poems—not according to the demands of a specific form, but according to the poet's desire to express an idea using a stanza of six lines. Sestets that occur in other types of poetry may or may not have a fixed meter and rhyme scheme—that all depends on what type of poem is being written. Here is an excerpt from Walt Whitman's "Come Up from the Fields Father," which includes a sestet written in free verse (poetry without a meter or rhyme scheme):

Lo, ’tis autumn,
Lo, where the trees, deeper green, yellower and redder,
Cool and sweeten Ohio’s villages with leaves fluttering in the moderate wind,
Where apples ripe in the orchards hang and grapes on the trellis’d vines,
(Smell you the smell of the grapes on the vines?
Smell you the buckwheat where the bees were lately buzzing?)

Above all, lo, the sky so calm, so transparent after the rain, and with wondrous clouds,
Below too, all calm, all vital and beautiful, and the farm prospers well.

Sestet in Dickinson's "The Soul has Bandaged moments"

The second stanza of this poem by Emily Dickinson is a sestet, but the poem is not an example of any specific fixed form of poetry.

Salute her, with long fingers -
Caress her freezing hair -
Sip, Goblin, from the very lips
The Lover - hovered - o'er -
Unworthy, that a thought so mean
Accost a Theme - so - fair -

My secrets cry aloud.
I have no need for tongue.
My heart keeps open house,
My doors are widely swung.
An epic of the eyes
My love, with no disguise.

This sonnet by Shakespeare gives a good example of the function the sestet plays as the final stanza in a sonnet. Opening with a "turn" in line 9 that shifts the direction and focus of the poem, this sestet progresses from the problem of worrying about a lover's unfaithfulness toward the resolution—that the mysteriousness of the lover is beautiful even when deception is at play.

So shall I live, supposing thou art true,
Like a deceived husband, so love's face,
May still seem love to me, though altered new:
Thy looks with me, thy heart in other place.

For there can live no hatred in thine eye,
Therefore in that I cannot know thy change,
In many's looks, the false heart's history
Is writ in moods and frowns and wrinkles strange.

But heaven in thy creation did decree,
That in thy face sweet love should ever dwell,
Whate'er thy thoughts, or thy heart's workings be,
Thy looks should nothing thence, but sweetness tell.
How like Eve's apple doth thy beauty grow,
If thy sweet virtue answer not thy show.

Sestets in Frank Bidart's "If See No End In Is"

The title of this sestina by Frank Bidart is the list of words that are repeated throughout the poem. Here are the sestina's first two stanzas, both of them sestets.

What none knows is when, not if.
Now that your life nears its end
when you turn back what you see
is ruin. You think, It is a prison. No,
it is a vast resonating chamber in
which each thing you say or do is

new, but the same. What none knows is
how to change. Each plateau you reach, if
single, limited, only itself, in-
cludes traces of all the others, so that in the end
limitation frees you, there is no
end, if you once see what is there to see.

Sestets in Milosz's "A Magic Mountain"

Czeslaw Milosz's free verse poem "A Magic Mountain" has seven stanzas. The stanzas do not have a consistent number of lines. Here, for instance are the fourth and fifth stanzas of the poem. Notice that the fifth stanza is a sestet.

Sultry Octobers, cool Julys, trees blossom in February.
Here the nuptial flight of hummingbirds does not forecast spring.
Only the faithful maple sheds its leaves every year.
For no reason, its ancestors simply learned it that way.

I sensed Budberg was right and I rebelled.
So I won’t have power, won’t save the world?
Fame will pass me by, no tiara, no crown?
Did I then train myself, myself the Unique,
To compose stanzas for gulls and sea haze,
To listen to the foghorns blaring down below?

Why Do Writers Use Sestets?

Sestets are found primarily in sonnets and sestinas, as both of these forms are relatively common and require the inclusion of one or more sestets. In other forms of poetry, sestets appear occasionally, though with less frequency than other types of stanzas, such as couplets or quatrains. Poets who write sestets generally do so because it seems to them to be the best stanza length with which to express a particular idea. Generally speaking, stanzas are used, much like paragraphs in prose, to group related ideas inside a poem into units of the right size, so in types of poetry that do not have specific requirements for stanza length, a sestet generally results from this consideration. 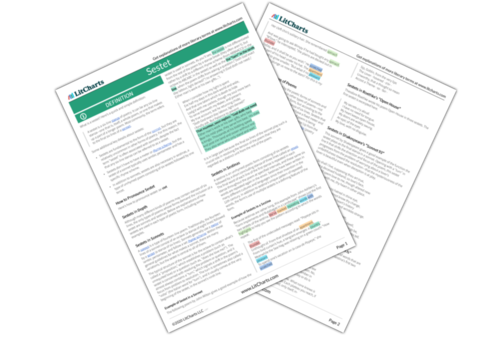