What is onomatopoeia? Here’s a quick and simple definition:

Onomatopoeia is a figure of speech in which words evoke the actual sound of the thing they refer to or describe. The “boom” of a firework exploding, the “tick tock” of a clock, and the “ding dong” of a doorbell are all examples of onomatopoeia.

Some additional key details about onomatopoeia:

Here's how to pronounce onomatopoeia: on-uh-mat-uh-pee-uh

The Four Types of Onomatopoeia

Onomatopoeia has a few distinct variants:

Real Words Made to Evoke the Sound of Real Things

In this rarer type of onomatopoeia, a word or series of words is used to imitate a real-world sound, even though the words used don’t mimic that sound themselves. Perhaps the most famous example of this type of onomatopoeia is Edgar Allen Poe’s poem “The Bells,” in which Poe repeats the word “bell” 62 times to evoke the sound of a bell ringing and tolling, even though the word “bell” itself does not itself sound like a bell ringing.

Made-up words can fill the void when no word exists to sufficiently capture the nuances of a real-world sound. For example, when James Joyce needed a word to convey the sound of someone knocking on a door, he invented “tattarrattat.” Today, almost a hundred years after he coined it in writing his novel Ulysses, “tattarrattat” has become a legit word (it’s in the Oxford English Dictionary).

A Series of Letters that Mimic a Raw Sound

Sometimes onomatopoeia involves no words at all, as in examples like “Zzzzzz” to represent the sound of sleeping or snoring, “hachoo” for a sneezing sound, or “tsk-tsk” or “tut-tut” to convey the scolding sound we make to express disapproval.

How Can You Tell if a Word Qualifies as Onomatopoeia?

There is no definitive test for whether a word qualifies as onomatopoeia. Some words, like “meow” and “buzz,” are clear examples of onomatopoeia because they’re like transcriptions of sound spelled out in letters. But other onomatopoeic words are subtler, such as the words “throbbing” and “moaning,”which appear in the Edgar Allen Poe poem “The Bells.” Does the word “moan” sound like someone moaning? Does “throb” sound like a heart beating? Kind of, but not obviously so.

The Onomatopoeia List website has collected hundreds of examples of onomatopoeic words and lets users vote on their relative onomatopoeia-ness. It can be helpful to consult their list to get a sense of whether a specific word qualifies as onomatopoeia. But you can also just make the judgment call for yourself.

Because onomatopoeia can make language so expressive, impactful, and memorable, it’s used almost everywhere you look, from literature to comics to advertising and more.

Writers use every type of onomatopoeia—and sometimes more than one type at once—to help bring characters, images, and scenes to life, as you’ll see in the examples below.

Poe’s poem is an onslaught of onomatopoeia. Here in Stanza IV of the poem he uses conventional onomatopoeia in which words like “throbbing,” “sobbing,” “moaning,” and “groaning” sound like the thing they refer to or describe. He also uses repetition of non-onomatopoeic words to create an onomatopoeic effect: repeating “time,” “bell(s),” and “knells” so many times evokes the tolling sound of a real bell.

Onomatopoeia in E. E. Cummings’ “I was sitting in mcsorley’s”

In this poem Cummings uses a mix of conventional onomatopoeia (the real words “tinking” and “slush”) and onomatopoeia with made-up words (“glush,” “ploc,” and “piddle-of-drops”) to convey the raucous sonic atmosphere of drinks being poured and people getting sloshed at one of Manhattan’s oldest bars.

Onomatopoeia in Shakespeare’s The Tempest

In Act 3, Scene 3 of The Tempest, Caliban uses onomatopoeia to convey the noises of the island. Note that “twangling” is a real word (it’s a less common form of the verb “twang”), so both examples in the lines below are conventional onomatopoeia.

Be not afeard. The isle is full of noises,
Sounds, and sweet airs that give delight and hurt not.
Sometimes a thousand twangling instruments
Will hum about mine ears, and sometime voices...

One of the most famous and outrageous examples of onomatopoeia in all of literature: the 101-character word Joyce made up in his novel Finnegan's Wake to represent the sound of the thunderclap that marked Adam’s fall from grace in the Garden of Eden.

Though it looks like pure gibberish, the word contains elements of real words from several languages, including French, Greek, and Japanese. And yes, it is possible to pronounce it (listen here). This example comes from the first few paragraphs of Finnegans Wake, and Joyce used several more of these 100+-character “thunder words,” as they’ve come to be called, throughout the novel.

Though not so common in modern comics, comic book writers of the past often captured the power of superheroes in action with blunt onomatopoeic language, mixing real words like “Pow!” with made up neologisms like “Blap!” Companies use onomatopoeia in brand names and slogans to make their marketing more memorable. Here are some examples:

Why Do Writers Use Onomatopoeia?

Everyday plain language can be pretty dull. Consider this example:

There’s nothing wrong with this sentence and it conveys meaning in a clear way. But, now consider this revision of the same sentence:

The three examples of onomatopoeia highlighted in blue here make this version of the sentence a lot more vivid and descriptive, right? And that’s exactly why writers use onomatopoeia:

With onomatopoeia, a gun doesn’t just go off, it goes “bang!” Thunder doesn’t just make a sound, it makes a “clap,” “crack,” or a “boom.” Birds don’t just sing, they “tweet” and “chirp.” Onomatopoeic words like these help bring written language to life. 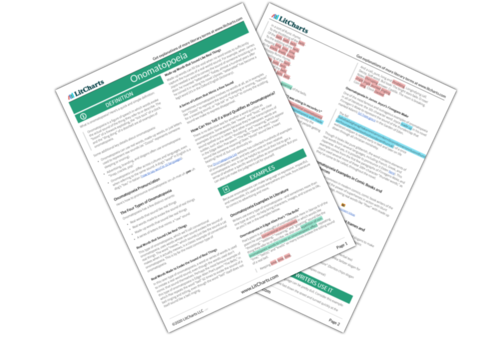