What is an iamb? Here’s a quick and simple definition:

Some additional key details about iambs:

How to Pronounce Iamb

Here's how to pronounce iamb: eye-am

In order to understand iambs in more depth, it’s helpful to have a strong grasp of a few other literary terms related to poetry. We cover each of these in depth on their own respective pages, but below is a quick overview to help make understanding iambs easier.

Accentual vs Quantitative Verse and Iambs

The term iamb takes on a different meaning depending on the type of verse in which it’s used: accentual verse or quantitative verse.

The heartbeat-like rhythm of the iamb (da-dum da-dum) is neutral enough that it can be used to suit a variety of writing styles and subject matters. No matter the context, though, the even pacing of iambic meter has a way of allowing for and elevating conversational writing, lending the words more heft and intensity. Iambic meters—particularly iambic pentameter—are very common in both poems and in the blank verse that Shakespeare used throughout all of his plays. In each example of iambic meters below, we’ve highlighted the stressed syllables in red and the unstressed syllables in green.

The popular Christian hymn "Amazing Grace" was written in what is referred to as "common verse," a metrical pattern often used in lyrical compositions that is comprised of lines of 4 iambs (iambic tetrameter) alternating with lines of 3 iambs (iambic trimeter). This famous song is a great reminder that iambic verse is all around us in well-known songs, and is also a strong example of how iambic meter can be used to imbue words with a quality of gravity and grandeur.

Amazing grace! How sweet the sound
That saved a wretch like me.
I once was lost but now am found;
was blind but now I see.

Lord Alfred Tennyson's well-known poem "Ulysses" is written in iambic pentameter, meaning that each line consists of five iambs. The poem is written as a dramatic monologue or soliloquy from the perspective of an aging Odysseus, the hero of the ancient Greek epic poem the Odyssey, who is reflecting on his life. The iamb lends the poem a feeling of solemnity and intensity that is particularly palpable in the poem's stirring final words.

Tho' much is taken, much abides; and tho'
We are not now that strength which in old days
Moved earth and heaven, that which we are, we are;
One equal temper of heroic hearts,
Made weak by time and fate, but strong in will
To strive, to seek, to find, and not to yield.

Notice how Tennyson's use of iambic pentameter is irregular in lines 2 and 3. Throughout the long poem he intersperses spondees (a foot consisting of two stressed syllables) and trochees (a foot consisting of a stressed syllable followed by an unstressed syllable). This strategic irregularity has the effect of making Ulysses' speech both more labored and more human. Note also that, in line 3, the word "heaven" must be read as a single syllable—"heav'n"—in order for the line to retain the required ten syllables.

Iambs in Dickinson's "Because I could not stop for Death"

This poem by Emily Dickinson is written in common verse—as the majority of Dickinson's poems were—alternating between iambic tetrameter and iambic trimeter. Because Dickinson's poems often share the same metrical pattern as "Amazing Grace," they can be sung using the "Amazing Grace" melody. This poem addresses the subject of time by telling the story of taking a ride on Death's horse-drawn carriage, a somber subject matter—and one that the iamb's heartbeat-like rhythm is well-suited to.

Iambs in Shakespeare's "Shall I compare thee to a summer's day?"

Sonnets are fourteen-line poems written in iambic pentameter that follow a particular rhyme scheme. Many of Shakespeare's sonnets are, like this well-known example, love poems. Again, notice how the theme of the sonnet is matched by its rhythm: that of a beating heart.

Shall I compare thee to a summer's day?
Thou art more lovely and more temperate.

Iambs in Shakespeare's Romeo and Juliet

Shakespeare also used iambic pentameter throughout many of his plays, including Romeo and Juliet. The passage below exemplifies how the iamb can be used to write verse that sounds as natural as dialogue (since Shakespeare's plays were written for stage) without sacrificing the feeling of intense emotion needed to write a romance as epic as Romeo and Juliet's.

But soft, what light through yonder window breaks?
It is the east, and Juliet is the sun.
Arise, fair sun, and kill the envious moon,
Who is already sick and pale with grief
That thou, her maid, art far more fair than she...

Notice that, while Shakespeare's use of iambs is not strict throughout this passage, he begins and ends the passage with strong lines of regular iambic pentameter.

Why Do Writers Use Iambs?

The iamb is the most commonly used foot in English poetry because it is the most versatile. Compared to all other two-syllable and three-syllable feet, the iamb most closely mimics the rhythm of speech, so iambic meter is good for writing verse that sounds natural to the ear. Given its versatility, a writer might make use of iambic meter to create a conversational tone in a text (think of Shakespeare's Romeo and Juliet) just as often and as easily as they might use it to give a poem a greater sense of gravity and grandeur (think of Tennyson's "Ulysses"), or to imbue a song with a sense of awestruck reverence, as in "Amazing Grace." Iambic meters almost sometimes crop up in famous speeches or rhetoric, as a speaker or writer works to achieve a level of splendor, richness, or stateliness in their speech or writing. This famous line from the Declaration of Independence, for example, is a perfect line of iambic pentameter:

We hold these truths to be self-evident 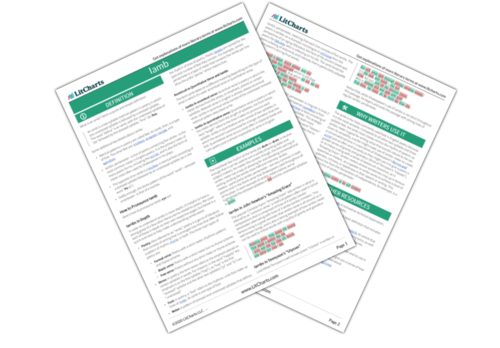