What is aphorismus? Here’s a quick and simple definition:

Aphorismus is a type of figure of speech that calls into question the way a word is used. Aphorismus is used not to question the meaning of a word, but whether it is actually appropriate to use that word in a particular situation. For instance, in Shakespeare's Richard II, King Richard asks "How can you say to me I am a king?" as a way of expressing that, although he is technically a king, he doesn't feel he actually possesses the qualities of a king and that therefore perhaps the word should not apply to him.

Some additional key details about aphorismus:

The word "aphorismus" comes from the Greek word aphorismós, which means "rejection." This is fitting because when a speaker or writer uses aphorismus, they are effectively rejecting the usage of a word by suggesting that it is an inaccurate way of describing a certain subject. For instance, imagine that you are walking down the street on a very cold day in August, and you turn to your friend and say "I didn't even think it was possible for a summer day to be so cold." Your friend might add:

"Can you even call it a summer day?"

This remark, made in the form of a rhetorical question, is an example of aphorismus because it calls into question the usage of a particular word or term ("summer day") to describe a particular subject (that particular cold day in August). As in this example, aphorismus always implies that there is a gap between what a word actually means and how it has been used. So even though every day in August is technically a day of summer, it might be so cold that the term "summer day" suddenly seems like an inaccurate way of describing that particular day.

Aphorismus Does Not Have to Use Rhetorical Questions

For instance, someone driving through Tuba City, Arizona (which is actually a small town with a population of 1,400 people) might say aloud to themselves, "I can't believe they call this a city." Here, the person is calling into question this particular usage of the word "city"—the word implies a large metropolitan area, which does not correspond to the actual size or nature of Tuba City.

A Mnemonic Device to Remember What Aphorismus Means

Imagine that you are walking through a garden tour, and the female tour guide keeps referring to the garden as "a forest." You ask the guide, "Can you even call this a forest, miss?" The word "aphorismus" sounds similar to the end of the question ("a forest, miss"), which is itself an example of aphorismus. If you ever have trouble remembering the word aphorismus, just think of this example of the female tour guide who keeps calling the garden "a forest."

In this scene from Beckett's famous play, Waiting for Godot, the characters Vladimir and Estragon ask Pozzo why his servant never puts down his bags. Pozzo, in response, questions their use of the word "bags" to describe his luggage:

This is an interesting use of aphorismus, because Pozzo seems to use it as a way of avoiding the original question. Estragon and Vladimir are wondering why the servant doesn't put down the bags. Pozzo responds not be answering, but by questioning whether "bags" is the right term for the luggage at all given how large and heavy they are. Pozzo uses aphorismus here to shift attention from the servant to the "bags."

In this quote, Fred accuses Holly, the woman he's in love with, of not being the true "free spirit" that she believes she is:

You call yourself a free spirit, a “wild thing,” and you’re terrified somebody’s gonna stick you in a cage. Well baby, you’re already in that cage. You built it yourself. And it’s not bounded in the west by Tulip, Texas, or in the east by Somali-land. It’s wherever you go. Because no matter where you run, you just end up running into yourself.

The aphorismus in this example is implied rather than direct. Fred never says explicitly that Holly isn't a free spirit or a wild thing—he rather mentions that she has called herself those things, but his tone and words then implicitly questions whether those are accurate descriptors.

In this 1918 speech, politician Eugene Debs used aphorismus to question the legitimacy of a democracy that exploits child labor:

Why, the other day, by a vote of five to four—a kind of craps game—come seven, come ‘leven —they declared the child labor law unconstitutional ... and this in our so-called democracy, so that we may continue to grind the flesh and blood and bones of puny little children into profits for the Junkers of Wall Street. And this in a country that boasts of fighting to make the world safe for democracy!

This example shows how aphorismus can be accomplished very succinctly: simply by tossing the words "so-called" in front of the word "democracy," Debs calls into question whether that word truly captures the essence of a society that allows for child labor.

Aphorismus in Bill Clinton's Statement to the Grand Jury

When President Bill Clinton was discovered to have had inappropriate relations with Monica Lewinsky, an intern in the White House during his presidency, he was called before a grand jury to testify under oath. When asked whether he had been lying to his aides when he told them "there is nothing going on between [me and Monica Lewinsky]," Clinton famously responded:

"It depends on what the meaning of the word 'is' is."

Clinton is saying here that when he used the word "is," he was truthfully telling his aides that there wasn't anything "going on" between him and Lewinsky at that particular time, even though previously there had been. Here Clinton is calling into question the way that the prosecutors are using the word "is" in this particular situation—he is using aphorismus—as a defense in order to argue that he was always telling the truth when he denied the relationship.

Lyricists use aphorismus to appeal to their listeners' emotions.

Aphorismus in Abigail's "How Can You Call It Love?"

In this dance song from the '90s, the singer questions whether it's accurate to say that what she shares with her romantic partner is "love," given that it seems "so unkind" and the person is not there for her all the time.

Making love on borrowed time
Just to keep my hopes alive
You're in my dreams and on my mind
Will your conscience survive?

In this verse, Abigail implies that her partner has not been fully committed to their relationship. She calls into question how someone who acts that way can claim that they are in love.

Why Do Writers Use Aphorismus?

Writers, lyricists and orators use aphorismus for a variety of reasons:

Aphorismus can add considerable depth to a dramatic moment, especially as a sharp rhetorical point in a speech or monologue. It can make an argument more incisive, witty, expressive, and implicitly draw attention to another person's inappropriate use of a word. If King Richard II had bluntly said, "Given my troubles, I think there are more accurate words you can use to describe me than 'king,'" his inquiry would have lacked all the punch that makes it such a famous line of dialogue. With aphorismus, however, it rings out as one of the play's most quoted lines. 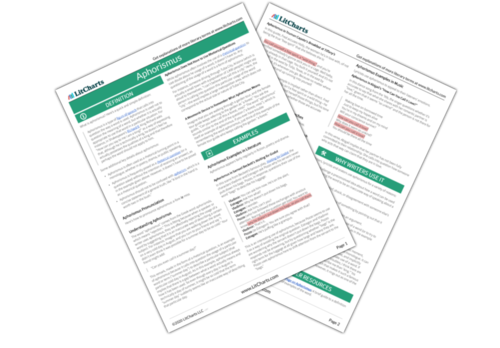