What is Bildungsroman? Here’s a quick and simple definition:

Bildungsroman is a genre of novel that shows a young protagonist's journey from childhood to adulthood (or immaturity to maturity), with a focus on the trials and misfortunes that affect the character's growth.

Some additional key details about Bildungsromans:

How to Pronounce Bildungsroman

Here's how to pronounce bildungsroman: bill-dungs-rome-ahn

While people have always told stories about coming of age, the specific genre of the Bildungsroman originated in Germany in the early 19th century. In its early form, the Bildungsroman was regarded as a novel that had educational as well as philosophical value for young adults, because it portrayed characters who not only strove to better themselves, but who were able to outgrow or leave behind childish behaviors in the pursuit of a higher aim.

The example given most often is Johann Goethe's Wilhelm Meister's Apprenticeship, in which the main character (Wilhelm) seeks to escape the mediocrity of his middle-class upbringing and lead the life of an artist instead. The book contains many of the plot elements that later became hallmarks of the genre: Wilhelm endures heartbreak, has his artistic aspirations crushed, gets sent away from home by his parents to learn a thing or two, squanders his fortune unwisely, and faces financial ruin.

By the end of the novel, however, Wilhelm shows signs of having matured as a result of his experiences. Not only has he begun to find some success for himself as an actor, but the book ends with him taking a strong moral stance: he sets off on a journey to find and reprimand another character, whose selfish behavior had ruinous consequences for one of Wilhelm's friends. This focus on personal growth and self-realization—particularly through making and learning from mistakes—remains the key feature of the Bildungsroman. The genre grew in popularity dramatically during the 20th century and spread to different cultures around the world.

The typical Bildungsroman has a three-part structure:

Though this structure is not always used by writers of Bildungsromans exactly as described here, it is extraordinarily common for Bildungsromans.

While there are many books in the world that are about a character's maturation process, not all of them would be considered Bildungsromans. Aside from the three-part structure described above, which may not always be used, there are a slew of common characters, themes, and plot devices that authors historically have used when writing novels in the Bildungsroman genre.

To help you identify whether or not a novel belongs in the literary genre of bildungsroman, see if you can identify any of the following features in the book. While no Bildungsroman has all of these features, a true Bildungsroman is likely to have at least one of them.

Within the genre of Bildungsroman, there are several more specific terms (all of which come from the German language) that have been used to sub-categorize books in the Bildungsroman genre. While these terms aren't used commonly anymore, they do underscore the importance of the themes of growth and formation at the center of every Bildungsroman.

The following examples showcase the maturation process of three common types of Bildungsroman protagonists: the orphan, the misfit / runaway, and the artist. We've broken up the summary for each book into the three different parts of the genre's structure (Early life, Formative Experiences, and Conclusion) as well as highlighted examples of protagonists, themes, characters, and plot devices that are typical of the genre.

Early Life: Orphan Jane lives with her cruel Aunt at the luxurious Gateshead Hall, where she is bullied by her cousins, ridiculed for being poor, and locked in rooms as punishment. Jane goes off to boarding school to escape her cruel relatives, but life is rough at the austere Lowood School, too: the temperature is frigid, the food inedible, and Jane watches her only friend get beaten in class by a wicked teacher. Jane learns about religion from her inspiring friend Helen Burns and has a spiritual awakening. These new Christian values, like turning the other cheek, will serve as her guidepost throughout the novel and as her strength during trials.

Formative Experiences: As a young woman, Jane accepts a job as a tutor and goes to live at the splendid Thornfield Hall. As time passes, she grows concerned about the third floor, where she keeps hearing maniacal laughter and frightening sounds. Jane continues to hone her talent for drawing and falls in love with Mr. Rochester, the gruff and mysterious master of the estate, but due to her lowly social position she believes she has no chance. When Mr. Rochester asks Jane to marry him, their engagement is halted by a visitor who reveals that Mr. Rochester is already married. His wife is Mrs. Rochester, a madwoman kept locked in the attic. Jane leaves in despair.

Conclusion: Later, having discovered long-lost relatives and receiving a marriage proposal from someone else, Jane has a premonition and returns to Thornfield Hall to find it nearly destroyed by a fire that has gravely injured Mr. Rochester. Jane finally finds her place as the wife of the disfigured and humbled Mr. Rochester, whose wife died in the fire. Jane Eyre is a rags-to-riches Bildungsroman with a moral message. She practiced Christianity-inspired self control, leaving Mr. Rochester—the man she loved—until circumstances changed, and they might be lawfully wed. Watching Jane go from penniless orphan to mistress of an estate, the reader sees that Jane only prevailed over hardship by relinquishing the idea that she could control her environment.

The Catcher in the Rye by J.D. Salinger

Though The Catcher in the Rye begins in the protagonist's adolescence (rather than his childhood), the novel is still a Bildungsroman, as its protagonist Holden Caulfield details his journey to maturity.

Set-Up: Holden is a teenaged misfit who keeps failing out of his East-coast prep school and is already weary of life as an adult. He frequently dubs things and people around him "phony" to express his disenchantment. He has no luck with girls, and his observation of his handsome roommate Stradlater's relationship with girls (particularly Jane Gallagher, whom Holden admires from afar) reveal his own sexual frustrations. He ponders moving to a monastery or some other far away place. Knowing he'll be expelled, he decides to run away to New York City.

Formative Experiences: Holden does run to New York, and he gets a room at the Edmont hotel. He flirts with older women at the hotel bar, but their fascination with wealth depresses him. He pays for a prostitute but doesn't have the stomach to sleep with her, so sends her away instead. Right as he's about to pray, he gets beaten and robbed by the woman's pimp. The next morning he meets two nuns and has a date with a girl named Sally, but he's so depressed that he loses his cool, and the date ends in disaster. He sneaks back into his house and talks to his little sister, Phoebe. He tells her that he's running away to go out West. Holden then goes to see another encouraging teacher, Mr. Antolini, who warns him that he's heading for a great fall unless he starts following the rules. Holden's mental and physical health are declining, and he later faints at the Met.

Conclusion: When he sees his little sister again, he is moved and decides not to go West. He watches Phoebe on the carousel, and finally has a moment of peace and happiness. The novel ends with Holden telling the reader that he's going to try harder next time at school, and, with a note of optimism, that he even misses his roommate Stradlater. These two concessions are telling of the growth Holden has done in the course of this Bildungsroman. Both Holden and the reader have learned that Holden's childish tendency to distance himself from anything smelling of 'adulthood', and to flee from human relationships and their emotional risks, only lead to despair. By his willingness to change his mind, Holden is finally opening up to the possibility of a future beyond adolescence.

A Portrait of the Artist as a Young Man, James Joyce's coming-of-age story about a character named Stephen Dedalus, is an example of the Künstlerroman, or the sub-category of Bildungsroman that recounts the formation of an artist. The book holds true to the three-part structure of the Bildungsroman.

Early Life: Joyce begins by writing about Stephen's childhood in a stream-of-consciousness style that mimics the thoughts of a young child. In adolescence, it's clear that Stephen is more sensitive than the other boys. Stephen is a dreamer, always making poetic associations between sounds, smells, and memories. Joyce threads these observations throughout the book to show how Stephen's artistic senses evolve. He becomes infatuated with a girl named Emma, but the relationship is purely imaginative.

Formative Experiences: Divisive issues of politics and religion force Stephen to begin thinking deeply about God, death, and ethical matters, and he steps in when a cruel priest flogs a boy at his boarding school. Due to financial troubles, Stephen's family moves to Dublin. At his new boarding school he writes heretical essays and becomes disillusioned with God. As he gets older, and his intellect grows, so does Stephen's religious fascination and sexual frustration. He comes into money for his academic performance but grows more alienated from his family than ever after the money is gone. He attends a religious retreat but his resolve to remain pure fails, and he starts to see prostitutes.

Conclusion: After rejecting a life in the priesthood, Stephen watches a young girl on the beach and has an epiphany: he will become a writer. The end of the book leaves Stephen positive about the future, and about to leave Ireland to start his new artistic life. Steven's preoccupation with the loss of his own innocence, and his resulting shame about being impure, has finally loosened its grip. Over the course of the book, he has sought countless means to escape from this shame—retreat inward into imagination; a life in the Church; academic achievement—to discover that freedom can only be found by accepting his state of experience, and moving on from innocence.

Why Do Writers Choose to Write Bildungsromans?

Writers choose to write Bildungsromans in order to tell a story about human growth and self-actualization. In a Bildungsroman, readers follow one character through a span of their life, making the genre a great way to give the reader concentrated and detailed insight into how different reactions to a life experience can positively or negatively affect a character. Early German examples of Bildungsroman focused heavily on the concept of self-realization and learning from youthful mistakes, while more contemporary examples of Bildungsroman are often less overtly moralistic, and take more liberties with the traditional format. In all cases of Bildungsroman, however, the writer has set out to show how a single person is formed by people, places, and the passage of time. 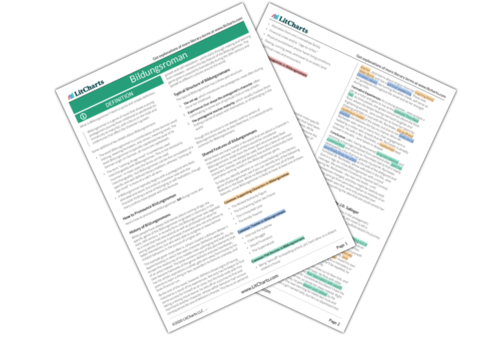