What is a villanelle? Here’s a quick and simple definition:

A villanelle is a poem of nineteen lines, and which follows a strict form that consists of five tercets (three-line stanzas) followed by one quatrain (four-line stanza). Villanelles use a specific rhyme scheme of ABA for their tercets, and ABAA for the quatrain. The first and third lines of the first tercet function as repeating refrains, which alternate as the final line of each subsequent tercet and appear again as the two final lines of the concluding quatrain. Although villanelles often do use meter, they don't have to use any one type of meter in particular.

Here's how to pronounce villanelle: vil-uh-nell

Form of the Villanelle

The defining features of the villanelle are its stanzas, rhyme scheme and refrains, which follow these rules:

It can be hard to grasp all of these rules without an example, so we've provided one: Jean Passerat's poem "Villanelle (I lost my turtledove)," the first fixed-form villanelle ever written. The formal aspects of the villanelle are highlighted: the first line of the poem is repeated as a refrain at the end of the second and fourth tercets; the third line is repeated at the end of the third and fifth tercets. The ABA rhyme scheme for the tercets, and ABAA rhyme scheme for the quatrain, are color-coded as well.

I have lost my turtledove:
Isn't that her gentle coo?
I will go and find my love.

Here you mourn your mated love;
Oh, God—I am mourning too:
I have lost my turtledove.

If you trust your faithful dove,
Trust my faith is just as true;
I will go and find my love.

Plaintively you speak your love;
All my speech is turned into
"I have lost my turtledove."

Such a beauty was my dove,
Other beauties will not do;
I will go and find my love.

Death, again entreated of,
Take one who is offered you:
I have lost my turtledove;
I will go and find my love.

History of the Villanelle

Prior to the 17th century, the term "villanelle" was used to refer to a style of lyric verse that was similar to a ballad and did not have a fixed form. The term simply carried the connotation of "country song." In 1606, however, the French poet Jean Passerat published a poem entitled "Villanelle (J'ay perdu ma Tourterelle)," which translates to "Villanelle (I lost my turtledove)" and followed the form described above—five tercets and one quatrain following an ABA rhyme scheme with two repeating refrains.

In the mid-1800s, two-and-a-half centuries after the original publication of "Villanelle (J'ay perdu ma Tourterelle)," a handful of minor French Romantic poets rediscovered Passerat's poem and, mistaking its form for a traditional one, began to mimic it in their own writing. In the 1870s, the English poets Edmund Gosse and Austin Dobson adopted the form, and since that time most villanelles have been written in English.

One of the first fixed-form villanelles to have been written in English, Gosse's 1877 poem was critical to both the standardization and popularization of the form. This villanelle is written in loose iambic tetrameter, and has a few irregularities worth pointing out. The first refrain (i.e., "Wouldst thou not be content to die?") is omitted from the final quatrain (though the same end-rhyme is used: "die"). The second refrain (i.e., "And golden Autumn passes by?") appears in a few slightly altered forms throughout the poem—sometimes phrased as a question, sometimes in the present tense, and sometimes in past tense—though in each variation it retains the same basic message (golden autumns pass by).

WOULDST thou not be content to die
When low-hung fruit is hardly clinging,
And golden Autumn passes by?

Beneath this delicate rose-gray sky,
While sunset bells are faintly ringing,
Wouldst thou not be content to die?

For wintry webs of mist on high
Out of the muffled earth are springing,
And golden Autumn passes by.

O now when pleasures fade and fly,
And Hope her southward flight is winging,
Wouldst thou not be content to die?

And thou, with many a tear and sigh,
While life her wasted hands is wringing,
Shalt pray in vain for leave to die
When golden Autumn hath passed by.

Oscar Wilde was another early adopter of the villanelle. Wilde was more widely read than Gosse, Dobson, and other English poets who employed the form in the late 19th and early 20th centuries. Wilde was therefore an important contributor to the form's rise to prominence. This is a traditional villanelle, meeting all the criteria of the form with no variations or exceptions. It's written in iambic tetrameter.

O singer of Persephone!
In the dim meadows desolate
Dost thou remember Sicily?

Still through the ivy flits the bee
Where Amaryllis lies in state;
O Singer of Persephone!

Simaetha calls on Hecate
And hears the wild dogs at the gate;
Dost thou remember Sicily?

Still by the light and laughing sea
Poor Polypheme bemoans his fate;
O Singer of Persephone!

The English poet W.H. Auden wrote numerous villanelles and contributed to a revival of the form in the 1930s. Notice how Auden has slightly varied the second-to-last line of the poem, which in a typical villanelle would match the first line of the poem. .

Time will say nothing but I told you so,
Time only knows the price we have to pay;
If I could tell you I would let you know.

If we should weep when clowns put on their show,
If we should stumble when musicians play,
Time will say nothing but I told you so.

There are no fortunes to be told, although,
Because I love you more than I can say,
If I could tell you I would let you know.

Suppose the lions all get up and go,
And all the brooks and soldiers run away;
Will Time say nothing but I told you so?
If I could tell you I would let you know.

This excerpt includes only the first three and the final stanzas of the poem If you want to read the full poem, you can find it here.

Though it does not adhere strictly to the form of the villanelle, Elizabeth Bishop's "One Art" is nonetheless a noteworthy contribution to the list of poems that were influenced by villanelles. As in a traditional villanelle, Bishop uses the first line of the poem as the poem's first refrain, but instead of using the entire third line as the second refrain, she simply uses the last word of that line ("disaster") to also end the lines that would normally repeat the refrain. This excerpt includes only the first three and the final stanzas of the poem.

The art of losing isn’t hard to master;
so many things seem filled with the intent
to be lost that their loss is no disaster.

Lose something every day. Accept the fluster
of lost door keys, the hour badly spent.
The art of losing isn’t hard to master.

Then practice losing farther, losing faster:
places, and names, and where it was you meant
to travel. None of these will bring disaster.

—Even losing you (the joking voice, a gesture
I love) I shan’t have lied. It’s evident
the art of losing’s not too hard to master
though it may look like (Write it!) like disaster.

This excerpt includes only the first three and the final stanzas of the poem If you want to read the full poem, you can find it here.

Why Do Writers Choose to Write Villanelles?

There are a number of reasons why writers might choose to write a poem in the form of a villanelle: 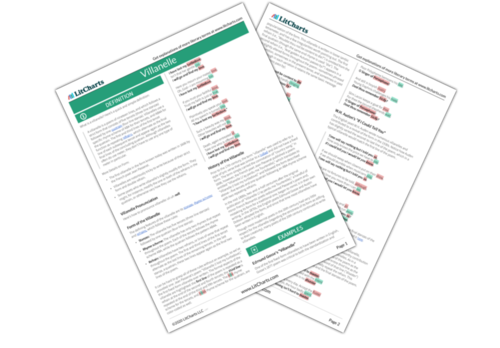