What is internal rhyme? Here’s a quick and simple definition:

Internal rhyme is rhyme that occurs in the middle of lines of poetry, instead of at the ends of lines. A single line of poetry can contain internal rhyme (with multiple words in the same line rhyming), or the rhyming words can occur across multiple lines. An example of internal rhyme would be "I drove myself to the lake / and dove into the water."

Internal Rhyme Within a Single Line vs. Multiple Lines

I drove myself to the lake and dove into the water.

Or as two separate lines:

I drove myself to the lake
and dove into the water.

Both of these are examples of internal rhyme—the only difference is that a line break has been inserted in the middle of the second example.

Since internal rhyme is defined by the position the rhymes occupy within the line of verse, whether a line contains internal rhyme depends in large part upon where line breaks are placed. For instance, the lines

I drove myself to the lake
and dove into the water

are an example of internal rhyme because the rhyming words are not followed by line breaks. However, the lines can be easily turned into examples of end rhyme by changing the placement of the line breaks, so that the lines reads:

Late Sunday afternoon. I drove
myself to the lake and dove
into the water.

While the placement of line breaks here is somewhat awkward, it illustrates how the difference between internal rhyme and end rhyme is really just a matter of where the line breaks are placed. But that doesn't mean the line breaks are unimportant. Even in poems without a consistent meter, line breaks help to set the rhythm of the poem. Note in these two examples how the line breaks put more emphasis on the final words of each line, making the rhyme itself clearer and more obvious. Poets make decisions about where to place line breaks for all sorts of reasons; how it emphasizes, or doesn't emphasize, any rhymes is one of those reasons.

Internal rhyme is often described as being subtler than end rhyme. This subtlety occurs for two related reasons:

Most people, when they think about what constitutes a rhyme, are actually thinking about just one type of rhyme in particular: perfect rhyme. Perfect rhymes refer only to words with identical sounds like "game" and "tame," or "table" and "fable." But there are actually many different types of rhymes, and all of them can be used to create internal rhymes.

To find out more about the many different types of rhymes that can be used to create internal rhymes, take a look at the LitCharts entry on rhyme.

In the following examples, internal rhymes are highlighted to help you identify them more clearly.

Once upon a midnight dreary, while I pondered, weak and weary,
Over many a quaint and curious volume of forgotten lore—
While I nodded, nearly napping, suddenly there came a tapping,
As of some one gently rapping, rapping at my chamber door.
“’Tis some visitor,” I muttered, “tapping at my chamber door—
Only this and nothing more.”

Notice how internal rhyme occurs within the first line, as well as across the third, fourth, and fifth lines.

The song of the Weird Sisters in Shakespeare's Macbeth is a classic and memorable example of internal rhyme.

This is an excerpt from a free verse poem by Margaret Ross that uses a barely discernible internal rhyme in the final line. The rhyme is not perfect—it's an example of slant rhyme.

Wherever you go, this buffering.
A dull hour. All that time
I could have touched you and didn’t
or did absentminded, getting in
or out of bed or trying to reach
something behind you.
I didn’t need anything
I could buy. I bought the socks
and a slatted spoon I haven’t used.

Though it may be hard to hear at first, pay attention to the way in which the words "slatted spoon" and "haven't used" contain all the same vowel sounds in the same order ("aah-ih-oo"), and also how the stress pattern of the syllables in the words is the same (i.e., slatted spoon, haven't used). All together, these characteristics make the words an example of internal slant rhyme.

Internal rhyme is common in music, where not all the rhymes are always perfect. The use of internal rhyme in addition to end rhymes makes songs easier to remember so they get stuck in your head.

This famous song often rhymes a word at the end of one line with a word in the middle of the next line. This excerpt contains the first two stanzas of the song.

Hey Jude, don't be afraid
You were made to go out and get her
The minute you let her under your skin
Then you begin to make it better

Internal rhyme is especially common in rap. In the following example, not all the rhymes are perfect (for example, "close" and "boast" is technically a forced rhyme) but they're all still internal rhymes. Here's an excerpt:

Brother, brother, brother, Lucien, you're like no other
Listen very close 'cause I don't like to boast
Instead, I'll tell the tale of a French who prevailed
Through the Mr. Crazy Rabbits who were always on his tail
We ain't on sale, your rumor starts to wail
Get caught with stolen goods and you will go to jail
If you go to jail, then who will pay the bail?
Deport you back to France on a ship with a sail

Why Do Writers Use Internal Rhyme?

Poets use internal rhyme for many of the same reasons they use rhyme in general: because it makes language sound more beautiful and thoughtfully-composed, like music. Internal rhymes can also help to increase the sense of rhythm of poetry, thus making it not only more pleasant to listen to but easier to both understand and memorize.

The use of rhyme in general has fallen out of favor with many poets writing today. However, despite this trend the use of internal rhyme maintains some popularity, because it's a more subtle form of rhyme that can increase the aesthetic quality of a poetic composition without making it sound overtly "rhyme-y." Internal rhyme is particularly common in song lyrics, where it is usually used in conjunction with end rhyme to increase the number of rhymes that can be delivered in a single line, which has the effect of making songs easier to remember. 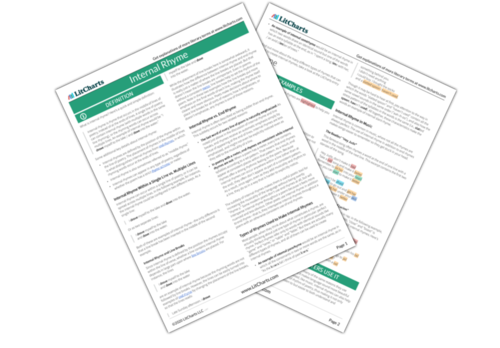