What is dramatic irony? Here’s a quick and simple definition:

Dramatic irony is a plot device often used in theater, literature, film, and television to highlight the difference between a character's understanding of a given situation, and that of the audience. More specifically, in dramatic irony the reader or audience has knowledge of some critical piece of information, while the character or characters to whom the information pertains are "in the dark"—that is, they do not yet themselves have the same knowledge as the audience. A straightforward example of this would be any scene from a horror film in which the audience might shout "Don't go in there!"—since that character doesn't suspect anything, but the audience already knows their fate.

How to Pronounce Dramatic Irony

Dramatic irony is used to create several layers of perspective on a single set of events: some characters know very little, some know quite a lot, and the audience in most cases knows the fullest version of the story. This device allows the audience to perceive the events in many different ways at once, and to appreciate the ways in which certain slight deficits of information can create vastly different responses to the same set of events. Sometimes these differences are comical, and sometimes they are painful and tragic. It's funny to watch Regina from Mean Girls stuff down "weight loss bars" we really know are weight gain bars, but it is painful to watch Snow White unknowingly bite into an apple that we the audience know is poisoned.

When Characters are in on the Dramatic Irony

In some literary works, one of the characters knows much more than the others, and so becomes a kind of secondary audience, displaying the pleasures and misunderstandings of dramatic irony directly on the stage. For instance, In Oscar Wilde's The Importance of Being Earnest, only Algernon and the audience know that Jack and Ernest are really one and the same person (or, rather, that Jack has invented Ernest). Algernon's amusement at the mishaps that ensue from this lie mirrors the audience's delight.

How Dramatic Irony Relates to Other Types of Irony

Irony is a broad term that encompasses quite a few types of irony, which we describe below. To better understand dramatic irony, it's helpful to compare it briefly with the other types of irony, each of which has a separate meaning and uses.

Generally speaking, irony is a disconnect between appearance and reality which points toward a greater insight. Aristotle described irony in loftier terms as a “dissembling toward the inner core of truth.” Dramatic irony fits under this broader definition, since it involves a character having a disconnect between what they perceive (which is an incomplete version of the story) and reality (about which the audience, and perhaps other characters, have knowledge). Therefore, every example of dramatic irony is also an example of irony, but not every example of irony is an example of dramatic irony.

Verbal irony is the most common type of irony, in which what one says is different from what one means. The definition of verbal irony is often mistakenly used in place of a more general definition of irony because, in a way, it is the most direct representation of the quality that unites all the different kinds of irony: a disconnect between perception and reality. Unlike other forms of irony, verbal irony can be communicated by tone only, as when someone wearily says "What lovely weather we're having" on a dark and rainy day. In that case, the speaker's true meaning would be clear to his listeners. But a subtler form of verbal irony can also serve as an example of dramatic irony. For example, let's say two people are leaving the theater after seeing the matinee of an awful play. A third person, who is on his way to see the evening show, asks them how it was; they glance at each other, and politely tell the stranger that the play was "very interesting." This is an example of subtle verbal irony, but since only the two who have already seen the play know how bad it was—and only they understand the true meaning of their words—it's also an example of dramatic irony.

Other Forms of Irony

Less common forms of irony include cosmic irony, in which fateful or divine forces continually foil a character's strivings; historical irony, in which a historical event turns out to have a very different meaning in hindsight; and Socratic irony, a conversational technique described in Plato's dialogues, in which a speaker feigns ignorance in order to trick their interlocutor into revealing the flaws in his or her own argument. These, too, can serve as examples of dramatic irony under the right circumstances—specifically, whenever the audience or reader understands more than the character or characters involved.

Dramatic Irony in Tess of the D'Urbervilles

Dramatic irony often plays a significant structural role in stories defined by secrecy and suffering, so it's no surprise that it appears frequently in the novels of Thomas Hardy. In Tess of the d'Urbervilles, dramatic irony defines the relationship between Tess, the heroine, and Angel, a suitor. Early on, before they are acquainted, Angel says to himself:

"What a fresh and virginal daughter of Nature that milkmaid is!"

His exclamation is an example of dramatic irony, because the reader knows that Tess mothered a child that was conceived as a result of rape. Later on, when Angel asks for Tess's hand in marriage, Tess hesitates to accept, because she can't bring herself to tell Angel about her illegitimate child. Her moment of hesitation is a further example of dramatic irony, because the reader understands the reason for Tess's hesitation, but Angel does not. These are only two among many such moments in the novel. Here, the device emphasizes the tragedy of misunderstandings, and the cruelty of certain kinds of prejudice.

Dramatic Irony in An Ideal Husband

Oscar Wilde's madcap plays are also full of dramatic irony, but to a quite different effect. Here, dramatic irony is mainly a comedic tool, where—even if the mishaps have serious implications—they are used to draw out the follies and absurdities of the protagonists.

In An Ideal Husband, the protagonist, Sir Chiltern, is asked by a mysterious woman from his past to use his political clout in support of a financial scam. Sir Chiltern refuses her, and tells his wife of his decision. Later, the woman, who is named Mrs. Cheveley, privately threatens to ruin Sir Chiltern's career if he doesn't comply with her request, and he is forced to comply. Mrs. Cheveley then triumphantly announces Sir Chiltern's decision to his wife, Lady Chiltern, who is shocked to learn of her husband's corruption:

Lady Chiltern: Why did you wish to meet my husband, Mrs. Cheveley?

Mrs. Cheveley: Oh, I will tell you. I wanted to interest him in this Argentine Canal scheme, of which I dare say you have heard. And I found him most susceptible,—susceptible to reason, I mean. A rare thing in a man. I converted him in ten minutes. He is going to make a speech in the House to-morrow night in favour of the idea. We must go to the Ladies’ Gallery and hear him! It will be a great occasion!

The above exchange is an example of dramatic irony because only the audience understands the real meaning of Mrs. Cheveley's slip of the tongue when she uses the word "susceptible" (as in, susceptible to blackmail), while Lady Chiltern remains ignorant.

One of the earliest and most famous, albeit unusual, examples of dramatic irony takes place in Sophocles' Oedipus Rex. The play describes King Oedipus's attempts to find and punish the man who murdered the former King Laius. Oedipus often speaks out vehemently against the murderer, as, for example, when he says:

Now my curse on the murderer. Whoever he is,
a lone man unknown in his crime
or one among many, let that man drag out
his life in agony, step by painful step—

What Oedipus doesn't know until the very end of the play is that he himself murdered King Laius, and that he is inadvertently cursing himself. Although this revelation is hinted at here and throughout the play, it isn't made explicit until much later. However, because ancient Greek plays often told mythological stories whose plots were already well-known to all theatre-goers, the audience would certainly have known the secret of Oedipus's identity, and his words would have rung with a double meaning informed by dramatic irony.

Dramatic irony appears frequently in horror movies, because it lends such stories an extra measure of painful suspense.

Dramatic Irony in Night of the Living Dead

At the end of the film, Ben, the protagonist, is the only human left alive in the house after a zombie attack. But when the police arrive looking for survivors and see Ben in the window, they assume he is a ghoul and shoot him on sight. Only the audience understands the meaning of their action; the police themselves remain ignorant.

In this beloved classic, a killer hides in the Wallace house and murders every teenager that enters, one by one. The audience quickly realizes that anyone who enters the house is doomed, but the kids themselves suspect nothing, and walk naïvely into the trap. Their ignorance, coupled with the audience's knowledge of their certain deaths, creates an extended, nail-biting sense of dramatic irony.

Dramatic Irony in A Nightmare on Elm Street

Throughout this classic film, adults laughingly dismiss a girl named Nancy’s claim that a killer is pursuing her in her sleep, but the audience has seen the killer at work, and knows that the violence he does in dreams leaves tangible marks in real life—so the adults' blithe attitudes are tinged with dramatic irony for the audience.

Examples of Dramatic Irony in Television

Dramatic irony is the main gag in Three’s Company, an old sitcom about a man living with two women under the watchful eye of a suspicious landlord. To convince their landlord that the arrangement is not unsavory, the roommates tell a lie—that the man is gay—though in fact there is actually a great deal of romantic tension between the three of them. The humor in nearly every episode is premised on the contrast between the landlord’s ignorance and the audience’s knowledge of this secret.

One example of dramatic irony in the television series Buffy takes place when Buffy's boyfriend Angel loses his soul, but Buffy remains unaware. Angel then treats Buffy cruelly, causing drama and distress, though only the audience at first understands the reason for his unusual behavior.

Why Do Writers Use Dramatic Irony?

Dramatic irony can serve a wide variety of purposes. Structurally, it is an excellent tool in both tragedy and comedy: it can create suspense or sharpen a story's emotional appeal, but it can also lead to a series of comical misunderstandings. It can make the audience feel as though they are in a privileged position of knowledge or understanding, compared to the ignorance of the characters, but it can also make them feel helpless as they watch events roll to their inevitable and tragic conclusion. More generally, dramatic irony shows that all perspectives are partial and limited, and that nothing is ever as it seems. 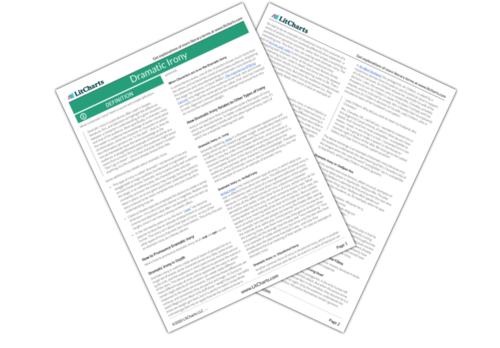