What is denotation? Here’s a quick and simple definition:

Denotation is the literal meaning, or "dictionary definition," of a word. Denotation is defined in contrast to connotation, which is the array of emotions and ideas suggested by a word in addition to its dictionary definition. The words "house" and "home," for example, have the same denotation—a building where people live—but the word "home" has a connotation of warmth and family, while the word "house" does not. A word's denotation does not include any of the subjective or emotional associations that are part of that word's connotation.

Some additional key details about denotation:

Here's how to pronounce denotation: dee-noh-tay-shun

While denotation is a relatively simple concept, there are some additional facts about it that are worth knowing:

Every single word in every language has a denotation. The examples of denotation in literature, speeches, and the speech of everyday life is therefore endless, but that also makes it hard to pick out one example from literature that better illustrates denotation than any other example. Instead of providing examples from literature, it's probably more helpful to see examples of words that have similar denotations but different connotations. The following list provides just that:

Why Writers Use Denotation

Because denotation is a word's explicit meaning, writers can't help but use this literary term in their work. Denotation is everywhere language is! But writers still rely greatly on denotation as an anchor for their artistic choices. All types of figurative language, like personification and metaphor, rely on the reader's understanding of both a word's explicit definition and the word's emotional and imaginative meaning—its connotation. Therefore, denotation can be understood as the bedrock upon which more complex and representative meanings are built.

Further, writers use denotation in the sense of choosing the right word for the right occasion. Writers pay close attention to the meaning of the words they use, so that they can be as precise, concrete, clear, and realistic as possible. For instance, someone who wrote, "When the doctor handed Margaret her new baby, Margaret smirked warmly at it," is misusing the word "smirk." The word's denotation—a smug or conceited smile—doesn't make sense in the context of the rest of the sentence. A writer can vastly improve his or her writing by paying close attention to the denotations of words and choosing those that best capture what the writer is trying to explain or describe. 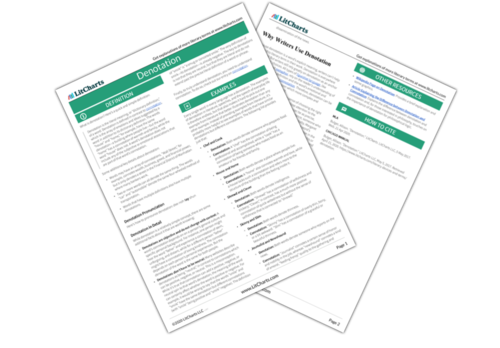