What is satire? Here’s a quick and simple definition:

Satire is the use of humor, irony, sarcasm, or ridicule to criticize something or someone. Public figures, such as politicians, are often the subject of satire, but satirists can take aim at other targets as well—from societal conventions to government policies. Satire is an entertaining form of social commentary, and it occurs in many forms: there are satirical novels, poems, and essays, as well as satirical films, shows, and cartoons. Alec Baldwin's impersonation of Donald Trump on Saturday Night Live is an example of satire.

Some additional key details about satire:

How to Pronounce Satire

Here's how to pronounce satire: sa-tire

Satire as Literary Device vs. Satire as Genre

There are many novels, plays, and other works of literature that fall into the genre of satire. These works are all characterized by their consistent and sustained satirical attacks on their various targets. For instance, Mark Twain's Adventures of Huckleberry Finn satirizes the hypocrisies of pre-Civil-War society in the American South, especially its traditions of racism and slavery.

But satire is not only found in literature that falls into the broader genre of satire. To the contrary, satire is a device that can be used in many types of writing and art. For instance, a 2017 production of Shakespeare's Julius Caesar in New York City came under criticism for costuming Caesar (who gets assassinated in the play) in a business suit and bright red tie that closely resembled the standard garb of President Donald Trump. While the play Julius Caesar is not itself a satire, this costuming decision added an element of satire to the play, since it equated the despotic almost-Roman-emperor with an American president whom some have criticized as having tyrannical impulses of his own.

Satirists use humor not only to to ridicule their subjects, but also to gain the attention and trust of their readers. While readers might not always respond to a highly-conceptual, nuanced argument for change laid out in a dense manifesto or academic essay, they can easily and enjoyably recognize societal problems targeted by satirical writing. Some scholars have argued that the popular appeal of satire helps in bringing about actual social reform, since the use of humor makes it easier to disseminate political and societal critiques more widely.

However, humor is not a required element of satire. George Orwell's Animal Farm is one of the more famous satires ever written, but few people find humor in it—and in fact, many people find it to be a deeply unsettling and not-at-all funny book.

Traditionally, scholars have divided satire into two main categories: Horatian and Juvenalian satire. These labels are derived from the names of the renowned Roman satirists Horace and Juvenal, who originated each type. A third, less common type of satire is Menippean satire, named after Menippus, the Greek cynic and satirist. These labels are more of a classical framework for literary critics rather than a strict set of guidelines that all modern satires must follow, but they are worth reviewing because they can help make clear the wide variety of forms that satire can take.

Satire often depends on other literary devices to help it achieve its effect. Below is a list of some of the most common devices that satirists employ when mocking their subjects. Keep in mind that these devices are not specific types of satire—they're just devices that are commonly used as a part of satire (the device), or in satire (the genre).

You can find examples of satire in most art forms, because artists who are critical of their societies may wish to bring about reform or simply to entertain their audiences by mocking familiar people or institutions.

There has been a long tradition of satirical novels that criticize and poke fun at all aspects of both society and humanity more generally.

In this example from Chapter Four of Gulliver's Travels, Swift satirizes the historically troubled relationship between Catholics and Protestants in England, recreating the conflict as a battle over the correct way to eat eggs:

It began upon the following Occasion. It is allowed on all Hands, that the primitive way of breaking Eggs, before we eat them, was upon the larger End: But his present Majesty's Grand-father, while he was a Boy, going to eat an Egg, and breaking it according to the ancient Practice, happened to cut one of his Fingers. Whereupon the Emperor his Father published an Edict, commanding all his Subjects, upon great Penaltys, to break the smaller End of their Eggs.

The People so highly resented this Law, that our Histories tell us there have been six Rebellions raised on that account; wherein one Emperor lost his Life, and another his Crown. These civil Commotions were constantly fomented by the Monarchs of Blefuscu; and when they were quelled, the Exiles always fled for Refuge to that Empire. It is computed, that eleven thousand Persons have, at several times, suffered Death, rather than submit to break their Eggs at the smaller End.

While the battle between the two types of egg-eaters is clearly ridiculous—those who fight in it would rather die than eat their eggs "incorrectly"—Swift here is actually taking a jab at the religious quarrels that have played a major role in English politics for hundreds of years by recasting these disputes as frivolous and arbitrary. Swift makes it clear that he's satirizing religious conflicts in England with an allusion to the religious revolts that claimed the life of King Charles I in 1625 and caused his heir, James II, to flee to France. By juxtaposing the king's dramatic escape with the trivial law that led to it, Swift is mocking the seriousness of the ongoing feud.

Satire in Alexander Pope's The Rape of the Lock

In the Third Canto of The Rape of the Lock, Pope satirizes the vanity of his fellow Englishmen, describing a minor incident (in which a woman loses a lock of hair) as an epic event.

Sudden he view'd, in spite of all her art,
An earthly lover lurking at her heart.
Amazed, confused, he found his power expired,
Resign'd to fate, and with a sigh retired.
The peer now spreads the glittering forfex wide,
To enclose the lock; now joins it, to divide.
E'en then, before the fatal engine closed,
A wretched Sylph too fondly interposed;
Fate urged the shears, and cut the Sylph in twain
(But airy substance soon unites again),
The meeting points the sacred hair dissever
From the fair head, for ever, and for ever!

Here Pope alludes to a real-life episode in which Robert Petre stole a lock of hair from his love interest, Arabella Fermor. Pope satirizes the minor event by inflating its importance to epic proportions: he makes reference to Sylphs, which are mythological creatures who intervene in moments of crisis. Additionally, Pope overstates the male lover's frustration and the extent to which Fate played a role in the incident (the minor theft of a single curl). The repetition of "for ever" in the final line only heightens the humor of the situation: the hair will obviously grow back in a short amount of time. These lines are gentle jabs at his peers' fixation on appearances.

Additional Works of Satire in Literature

Some additional famous satirical works of literature, and their targets, are:

Satire in Film and Television

Satire is popular on television, especially on late-night talk shows like Saturday Night Live and The Late Night Show with Stephen Colbert, where hosts regularly target politicians and celebrities who have been in the news recently. Ssome famous satirical movies and their targets are:

For centuries, cartoonists have used satire to raise awareness of political issues and to belittle people in positions of power. Often, they present extremely unflattering portraits of public figures, with exaggerated facial features and outrageous outfits to emphasize how loathsome they are in the eyes of the artist and readers.

Published in 1805, this cartoon depicts the French emperor and British prime minister battling for bigger portions of a globe-shaped dessert. Gillray satirizes French and British political ambitions by recasting the two leaders' competition for global dominance as a fight at the dinner table. While leaders often present their expansion efforts as being for the good of the nation, Gillray links their desire for new territory to their endless appetite for personal fame and power. Why Do Writers Choose to Write Satire?

Some authors write satire to raise awareness of social problems and apply pressure on the individuals or institutions responsible for creating them. However, satires don't have to explicitly call for social change—they may just be poking fun at human nature for the sake of entertainment. Writers can use satire for a variety of reasons: 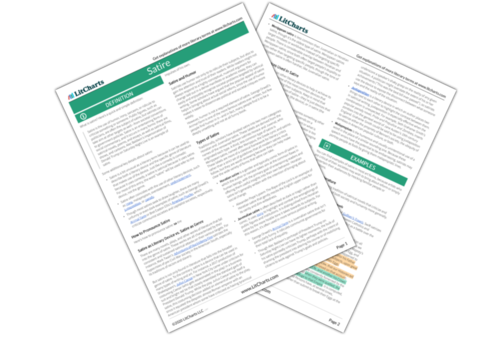