What is epanalepsis? Here’s a quick and simple definition:

Some additional key details about epanalepsis:

A Closer Look at Epanalepsis

There are a some nuances in the definition of epanalepsis that are helpful to know in order to fully understand the term.

The Repeated Words in Epanalepsis Don't Have to be Identical

Repeating phrases at the beginning and end of a sentence or phrase still count as epanalepsis even if they aren't perfectly identical:

Since the two clauses at the beginning and end of the sentence don't contain similar words, grammar, and meaning, they still give an effect of repetition, and so they count as epanalepsis. In fact, epanalepsis often benefits from having slightly different wording, as the slight change can make it feel more natural and less calculated.

Epanalepsis Doesn't Have to Involve the Very First or Final Words

Epanalepsis may appear near the beginning or end of a sentence or clause. So, even if other words precede or follow the repeating phrases, the repetition may still qualify as epanalepsis. For instance, most would agree that epanalepsis applies to these lines from T.S. Eliot's "The Lovesong of J. Alfred Prufrock":

Do I dare
Disturb the universe?
In a minute there is time
For decisions and revisions which a minute will reverse.

Even though the word "in" precedes the repeated phrase in line 3, and the words "will reverse" follow it in line 4, this is considered a case of epanalepsis because the key phrase ("a minute") appears very close to the beginning and end of the sentence.

Epanalepsis Can Occur Within a Clause of a Sentence

Sometimes epanalepsis appears within a piece of a longer sentence. For instance, in the following sentence from Virginia Woolf's To the Lighthouse, the first clause of the sentence contains an example of epanalepsis (with the repetition of the word "smile"), but it is followed by clauses that describe the smile and do not contain epanalepsis:

He smiled the most exquisite smile, veiled by memory, tinged by dreams.

Epanalepsis Can Occur Across Two Sentences

While some definitions of epanalepsis differ on this matter, it's generally accepted that epanalepsis can take place across multiple sentences. For instance, in these lines from John le Carré's novel Call for the Dead, both sentences involve the idea that people can never know the private, inner lives of those around them, with the second sentence expanding on the first. The repetition and unity in content help it qualify as epanalepsis.

Epanalepsis is a versatile tool found in both poetry and prose. It's used to draw attention to words or concepts, create a sense of musicality and rhythm, and give the pleasing sound that comes with carefully arranged repetition.

In this line from Beloved, Sethe invokes her daughter Beloved's name twice within a just few words.

Beloved is mine; she is Beloved.

This epanalepsis helps illustrate the enormous space Beloved occupies in her mother's mind. The degree of Sethe's focus on and obsession with Beloved is emphasized even more by the brevity of the sentence, and therefore the proximity of the repeated name.

In her short story Runaway, Alice Munro uses epanalepsis subtly, in a single, commonplace word: "you."

Few people, very few, have a treasure, and if you do you must hang on to it. You must not let yourself be waylaid, and have it taken from you.

The repetition of the "you" draws the reader personally into the story, makes the reader feel what it is like to have a treasure, and the urgency of making sure no one takes it from you.

In this example from King Lear, King Lear stands outside, shouting at a terrible storm. The repetition of the word Blow at the start of one sentence and the end of the next adds to the sense of thundering chaos, which captures both the power of the storm but also Lear's own growing madness.

Here, even though "blow" appears in two separate sentences, it's still epanalepsis—the second sentence, being a brief fragment, still functions as an extension of the first.

In this poem, Alexie uses epanalepsis to explore the pain and incomprehensibility of suicide. Although the speaker acknowledges he couldn't have persuaded this unnamed person to stay alive, he nonetheless poses an argument against the suicide, as if trying to revise the past.

Indistinguishable from the other dark times.

Here, repeating the phrase "dark time" in two separate sentences invites the reader to really think about the meaning—what exactly is a "dark time," and does it justify such an extreme action? Further, epanalepsis helps show the speaker's emotion and perhaps fatigue—the choise to use repetition, rather than search for a new word, betrays a type of weariness.

Repetition is essential to most song lyrics, and epanalepsis is sometimes used in refrains or to repeat a song's key message.

Epanalepsis in the Eagles' "Take it Easy"

This song by the Eagles makes a good case for epanalepsis' power to help a phrase stick in memory. The words "take it easy," which frame this stanza, contain the song's main message, and together constitute the line we're most likely to sing in the shower.

Take it easy, take it easy
Don't let the sound of your own wheels
Drive you crazy
Lighten up while you still can
Don't even try to understand
Just find a place to make your stand
And take it easy

In this tragic song about a Christmas spent in prison away from a loved one, epanalepsis helps to creates a sense of rhythm that deepens the tone of heartache as the speaker repeatedly calls to a woman who can't hear him.

Wait a while eternity
Old mother Nature's got nothing on me
Come to me, run to me, come to me now

Like many devices that use repetition, epanalepsis is a powerful tool of rhetoric, useful in highlighting a message and dialing up a speech's persuasiveness.

Epanalepsis in Ralph Nader's 2000 Speech to the NAACP

In this excerpt from a speech by Ralph Nader, the repetition of "minimum wage" underscores its role as a major concern in both his speech and his political priorities.

Epanalepsis in this case invites the audience to really think about what a minimum wage is and should be. Further, the juxtaposition of the phrase "livable wage" with the repeated "minimum wage," draws attention to the fact that minimum wages are often not enough to live on—so why are they the minimum?

In Allende's last speech as Chilean president, he uses epanalepsis to claim that history is a social process in motion in which people are the key players. The repetition of "history" within a few words makes it more memorable.

History is ours and people make history.

Epanalepsis Examples in the Bible

The Bible is known for the prodigious amount of repetition that it contains, so it should be no surprise that it is chock full of epanalepsis, as well. This repetition often lends a poetic quality to verses, which also makes them easier to remember and ideal for quoting aloud.

In this famous Bible verse, epanalepsis emphasizes the claim that all of human activity is in vain, both ephemeral and shortsighted. The repetition shows the Preacher's fervor about the issue.

Vanity of Vanities, saith the Preacher, vanity of vanities; all is vanity.

While the repetition of "vanity of vanities" is obviously epanalepsis, the final "vanity" is arguably also a case of epanalepsis, since it repeats the "vanity" at the very beginning of the verse even though it omits the rest of the phrase.

This verse clearly shows the impact of the primacy and recency effects: "Rejoice" is the sentence's key word, and it lands both at the start and finish of the verse, sticking in the reader's mind as all-important.

Rejoice in the Lord always: and again I say, Rejoice.

The structure of epanalepsis, which can be formulaic, makes it well-suited for use in aphorisms—which are concise expressions of truth. This is largely because exact repetition makes phrases easier to remember than, say, the use of a synonym would. Here are some examples of aphorisms that use epanalepsis:

Why Do Writers Use Epanalepsis?

Writers use epanalepsis to place greater emphasis on a string of words or an idea—perhaps with the desired effect of persuading their listeners, aiding in memorization, or making their words more pleasing to the ear by adding to the feeling of rhythm and musicality. In short, epanalepsis is useful for many of the same reasons that repetition in general is useful.

Epanalepsis is Great for Emphasis and Persuasion

As a rhetorical device, epanalepsis is a stellar tool for emphasizing a concept, and therefore persuading audiences. This is due largely to the phenomenon that people tend to remember the first and last parts of a sentence, which epanalepsis perfectly exploits by placing its repetition at the beginning and end of the sentence or clause.

Epanalepsis Helps Give Writing Rhythm and Makes it Beautiful

Generally speaking, repetition can be helpful for building cadence, rhythm, and flow in poetry and prose. Epanalepsis in particular has a compact, built-in pattern (repetition at beginning and end), which provides a unifying sense of coherence and adds the aesthetic benefit of repeating the same sounds, which we associate with music and poetry.

In the poem "Bread and Music" by Conrad Aiken, epanalepsis gives the lines a songlike quality:

Though, this phenomenon has its limits, too. Readers are bored or irritated by too predictable patterns, such as those used in children's songs.

Consider also Virginia Woolf's line from To the Lighthouse: "He smiled the most exquisite smile, veiled by memory, tinged by dreams." The repetition of the word "smile" gives the sentence a more pleasing and poetic sound than it would have if Woolf had written "He gave the most exquisite smile, veiled my memory, tinged by dreams." 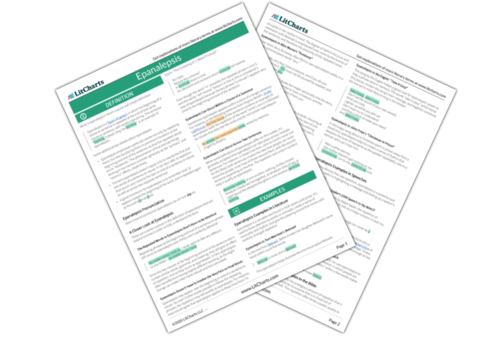