What is hamartia? Here’s a quick and simple definition:

Hamartia is a literary term that refers to a tragic flaw or error that leads to a character's downfall. In the novel Frankenstein, Victor Frankenstein's arrogant conviction that he can usurp the roles of God and nature in creating life directly leads to ruinous consequences for him, making it an example of hamartia.

Some additional key details about hamartia:

Here's how to pronounce hamartia: hah-mar-tee-ah

The concept of hamartia first appears in Aristotle's Poetics, the earliest known work of dramatic theory, written in 335 BCE. Aristotle argued that a good tragedy is neither about the downfall of a great man nor the success of a villain, but about the demise of someone who is simply human—neither evil nor a model of virtue—and, in that regard, relatable to the audience. But to be human is to be flawed, Aristotle points out. Therefore, he argues, tragedies should tell the story of someone whose downfall is caused not by greed or vice, but "by some error or frailty." This, according to Aristotle, is hamartia.

Although hamartia can be found in many works that do not align with Aristotle's definition of tragedy, it's important to note that only works that have tragic heroes (or, protagonists whose actions lead to their own downfall) can be said to contain examples of hamartia. Especially in classical tragedies, hubris (or excessive self-confidence) is a common trait that exemplifies hamartia.

Hamartia Can Take the Form of a Positive Quality

It's worth noting that the flaw or error that causes a character's downfall is typically not a morally condemnable one. Rather, it might be a fateful mistake as simple as leaving the window open, or even an apparently positive quality, such as loving too intensely. For instance, in the film Moulin Rouge!, the heroine Satine commits so fully to her dream of acting that this passion keeps her quiet about her tuberculosis, the disease which kills her. Artistic passion is usually a quality to admire, but here it steered her fate in a tragic direction.

Is Hamartia a Tragic Flaw or a Tragic Error?

Even though the word is over two thousand years old, debate about the true meaning of hamartia is alive and well. The main disagreement between scholars today is over whether the term refers to a tragic flaw or a tragic error.

Some scholars maintain that equating hamartia with "tragic error" is most faithful to Aristotle's original definition, and to the etymological root of the word, which means "missing the mark." Yet Aristotle's mention of "frailty" supports the opposing argument—that hamartia refers to some innate quality of the hero which leads to their demise.

This debate about the nature of hamartia is about as old as literature itself, so there's no easy answer to it. All you need to know is that there are these several slightly different definitions of hamartia, and some people adhere to one over the other.

Hamartia is a Tragic Flaw, Not Just a Flaw

Hamartia is not just the major flaw of a protagonist. Rather, the term can only be used in the context of tragedies, or stories with tragic heroes (in which the protagonist incites his or her own downfall). Some characters may be deeply flawed, but do not have hamartia if their flaws don't ultimately lead to their downfall. In Bond films, for instance, secret agent James Bond runs around the world breaking rules, destroying things, killing people, and objectifying women. Oftentimes one of Bond's many flaws gets him into trouble, but he always wins in the end, so his flaws are not examples of hamartia.

Examples of hamartia exist in all forms of narrative, from plays to novels to film. Further, it is found in stories from the time of the ancient Greeks to the most modern narratives.

Hamartia is used in tragic literature to propel the plot, deepen character, and make thought-provoking stories.

In Sophocles' play Oedipus Rex , written around 429 BCE, the protagonist Oedipus is an archetypal tragic hero: a Greek king, Oedipus has unknowingly killed his father and married his mother, the discovery of which leads his mother/wife to commit suicide and Oedipus to blind himself.

Scholars are divided over what Oedipus' tragic flaw was.

In the classic novel Frankenstein, the protagonist Dr. Victor Frankenstein succeeds in engineering a new form of intelligent life, usurping the role of God and nature. Dr. Frankenstein's own creation rebels against him, however, after Frankenstein fails in his role as creator by rejecting and abandoning the monster. Hamartia in Frankenstein can be interpreted in a few related ways:

In The Great Gatsby, the self-made millionaire Jay Gatsby's misguided priorities and dreams drive him toward a violent death. When Gatsby chooses to protect the love of his life, Daisy, after she kills a woman one night in a hit-and-run, it is his devotion to Daisy which leads directly to his own death at the hands of the woman's husband. It can be argued that Gatsby's hamartia consists of several qualities, all of which play a role in guiding Gatsby to his tragic end. Here are some:

As in literature, hamartia frequently appears in film, working to complicate characters and drive plots.

In the 2001 musical Moulin Rouge!, several elements lead to the film's tragic ending: the heroine's tragic flaw, a villain, and fate. The film tells the story of a cabaret performer, Satine, whose talent and ambition to succeed as an actress are so all-consuming that she neglects to seek treatment for the illness that eventually kills her: tuberculosis. So the tragic flaw that blinds her and leads to her death is the very thing that made her a great performer: her intense drive, her desire for fame, and her passion for performance.

In the 2010 Mexican-Spanish film Biutiful, the protagonist Uxbal is a layered hero, sympathetic despite some ugly behavior. Uxbal is a criminal; he arranges work in a sweatshop for a large group of undocumented Chinese immigrants. The workers sleep on the floor of a cold warehouse, so the good-hearted Uxbal decides to buy them gas heaters, opting for cheap ones since he has little money. When the heaters malfunction and cause a gas leak, most of the workers die overnight. The fatalities are discovered by the police, leading to a raid on Uxbal's operation and the deportation of one of his vendors, Ekweme. Ekweme's deportation leaves his wife and child destitute, obligating Uxbal to provide for them.

It could be argued that the tragic error was Uxbal's ignorance about the malfunctioning gas heaters, or that his frugality when buying the heaters is what leads to the lethal gas leak. It might also be interpreted that it was Uxbal's concern for others, despite his moral failures, that brought about the tragic turn, in which case the "flaw" is in fact a positive quality. In any case, the repercussions are disproportionately larger than the flaw or error.

What's the Function of Hamartia in Literature?

In literature, drama, and film, hamartia is what creates tragic heroes. Further, it can lead to a critical discovery on the hero's part, and works to create complicated and relatable characters.

Hamartia is the ingredient that makes tragic heroes tragic. When defining tragedy in Poetics, Aristotle claimed that tragedy involves a reversal of fortune—specifically, misfortune brought about not by external causes, but by the protagonist's own flaw or error. The protagonists in such texts are tragic heroes, and hamartia is the flaw or error that sets into motion the actions or plot developments that ultimately lead to the hero's demise. Without hamartia, Oedipus might not have rashly murdered his father or unknowingly married his mother (and Western literature would be missing one of its most influential texts).

Hamartia Can Lead to a Major Discovery by the Hero

Hamartia can bring about an important discovery for the story's hero. In tragedies, the term for this type of discovery is anagnorisis, or the shift from ignorance to knowledge. Typically, the revelation is about the hero's true nature or identity, the identity of other characters, or the unsavory reality of the hero's situation. A famous example of anagnorisis is Oedipus' discovery, via a messenger, of the truth about his father and mother, which compels Oedipus to blind himself.

As Aristotle argued, people who are either too good or too wicked seldom make compelling or relatable characters. Not only does hamartia help complicate characters and make them more sympathetic, it also discourages easy judgement of characters, since it's difficult for a reader to condemn someone to whom they relate. This is especially true of cases where hamartia has some positive aspects, such as Victor Frankenstein's hunger for knowledge and scientific acheivement. 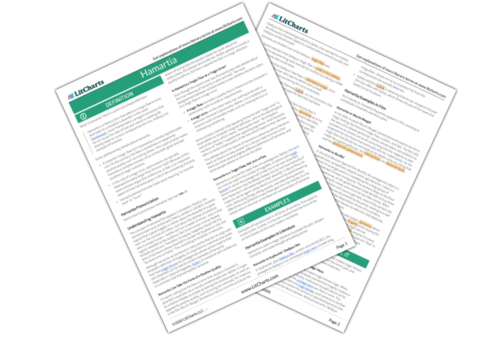