What is a dénouement? Here’s a quick and simple definition:

The dénouement is the final section of a story's plot, in which loose ends are tied up, lingering questions are answered, and a sense of resolution is achieved. The shortest and most well known dénouement, it could be said, is "And they lived happily ever after." Most stories, however, require a longer concluding section to achieve a sense of resolution.

Some additional key details about dénouements:

How to Pronounce Dénouement

Here's how to pronounce dénouement: day-noo-moh

It would be easy to think that the word "dénouement" is just a fancy way of saying "ending"—and in many ways, that's not far from the truth. But dénouement is a specific word that has to do with achieving a sense of resolution and showing the outcome of the story's main events. While a great many endings do this, not all of them do. Moreover, the dénouement of a story is a specific section of the story, which itself has a beginning and ending. Here are a few of the key defining features of dénouement to help you identify it:

One of the first and most influential people to create a framework for analyzing plots was 19th-century German writer Gustav Freytag, who argued that all plots can be broken down into five stages: exposition, rising action, climax, falling action, and dénouement. Freytag originally developed this theory as a way of describing the plots of plays at a time when most plays were divided into five acts, but his five-part "pyramid" can also be used to analyze the plots of other kinds of stories, including novels, short stories, films, and television shows. Here's the pyramid as originally defined by Freytag:

While Freytag's pyramid is very handy, not every work of literature fits neatly into its structure. In fact, many modernist and post-modern writers intentionally subvert the standard narrative and plot structure that Freytag's pyramid represents. We mention this here because dénouement is often spoken about in relation to other parts of Freytag's pyramid, and because understanding where the dénouement typically occurs within a narrative may help you identify it.

Dénouement in Romeo and Juliet

At the end of Romeo and Juliet, after Romeo and Juliet have killed themselves, there comes a brief dénouement in which Montague and the Capulets (Romeo and Juliet's parents) come to see their children's dead bodies. The Friar explains what has happened, and Prince Escalus, in turn, curses the two families, saying that their hate is so terrible that "heaven finds means to kill your joys with love." The prince's remark effectively contextualizes all that has transpired—including the death of the two star-crossed lovers—within a broader, familial narrative, thereby imbuing the story with a sense of cosmic irony. In response to their children's deaths, the two families vow to end their feud and erect a golden statue of the couple. This dénouement, though it follows a tragic ending, gives the play a sense of resolution by (1) tying up the loose ends, (2) explaining the plot succinctly, (3) showing how the events of the story impact the lives of those involved, and (4) giving the audience a sense that there is some justice despite the injustice of the main characters' deaths.

The HBO series Big Little Lies focuses on the lives of five women who live in an affluent coastal region of Northern California. Their young children all attend the same school, where the domineering mothers are intensely invested and involved in the social lives of their children—which continuously gives rise to petty, bitter feuds among the women in the community. The show's first season focuses on one particularly messy feud which leads to a death, though it remains unclear who has died and who killed them until the final episode. In the dénouement, the five women—previously bitter enemies—are shown enjoying each other's company on the beach with all their children. They have all agreed to lie on one another's behalf when questioned by detectives, thereby protecting the killer, whose identity they all know. It's a good dénouement because it shows that the characters' lives have returned to "normal," but that they have also changed as a result of the story, and that their lives are better than they were before—since they're able to be friends now.

However, the final shot of the season is filmed from a distance through binocular lenses, implying that the characters are being watched—in other words, that they aren't out of harm's way yet. This makes the dénouement a good example of an ending that suggests "it isn't over yet." But importantly, it's still a resolution to the story, and doesn't necessarily mean that the story will be continued in another season. On the contrary, the show's director and producer has said "There is no way; there’s no reason to make a Season 2. That was meant to be a one-time deal, and it’s finishing in a way where it’s for the audience to imagine what can happen.”

Dénouement in The Lord of the Rings

JRR Tolkien's "Lord of the Rings" trilogy tells the story of Frodo, a hobbit who must journey to a dangerous and faraway land in order to throw a magical ring into a volcano and, in doing so, destroy Sauron, a major force of evil that threatens the entire world, including everyone he loves. People often say that the final book (or film) of the trilogy ends with one climax after another, in a seemingly endless succession. But this is actually a mistake. While it's true that the plot of the film continues for quite some time after the climax (in which the ring and Sauron are destroyed), it is not the case that each new plot development that occurs after the film's climax is a climax in its own right. Rather, the film has a brief falling action sequence, followed by a long dénouement, consisting of many different scenes in which the story's various subplots are each brought to their own conclusions: the heroes are reunited, the rightful King of Middle Earth is crowned, the heroes are thanked for their heroic sacrifice, and the various characters are shown having returned to "business as usual" in their homeland, years after the events of the story. At the very end of the dénouement, there's a passage in which the heroes are ferried to another world, a heaven-like realm that's free of evil and sickness, where they literally do live "happily ever after."

What's the Function of a Dénouement in Literature?

Most pieces of writing that have plots can also be said to have dénouements. Dénouements serve many different purposes in a story. Here are some of the main reasons so many writers build their plots with a dénouement at the end: 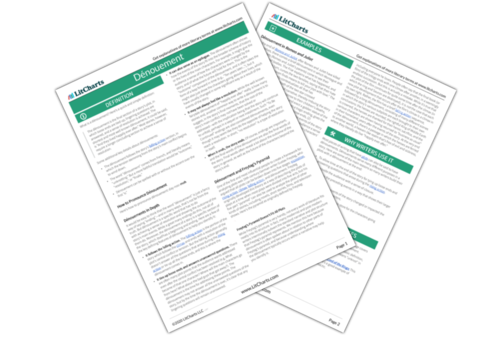