What is repetition? Here’s a quick and simple definition:

Repetition is a literary device in which a word or phrase is repeated two or more times. Repetition occurs in so many different forms that it is usually not thought of as a single figure of speech. Instead, it's more useful to think of repetition as being a category that covers a number of more specific figures of speech, all of which use repetition in different ways.

Some additional key details about repetition:

Here's how to pronounce repetition: rep-ih-tish-un

Figures of Speech that Use Repetition

Here are additional examples from literature for each of the most common figures of speech that use repetition.

This example from lines 5-6 of the Prologue of Romeo and Juliet has two sets of alliteration, one with “f” sounds and one with “l” sounds.

In Lolita, the morally bankrupt Humbert Humbert defends his relationship to the young Lolita to an imagined jury. Here, he reveals that what he presented as another person's letter was actually written by him, ostensibly from memory.

A tactic of his deceit involves convincing the jury of the improbable—that is, that he remembers a letter verbatim—and his use of anadiplosis as a persuasion tool reflects both his charming and incredibly slimy personality.

In this short excerpt from The Great Gatsby, F. Scott Fitzgerald uses anaphora in a description of the apartment that Tom Buchanan keeps as a secret location for his extramarital affair. The anaphora emphasizes the smallness of this gaudy apartment, which also reflects the pettiness of the affair.

Shakespeare often used antanaclasis in his plays. For instance, in Act V of Henry V a character named Pistol promises to sneak off to England and there engage in crime:

To England will I steal, and there I'll steal.

The dashing trio's rallying cry in The Three Musketeers is a famous example of antimetabole. The saying has remained in circulation until today—in part because antimetabole makes it so memorable.

All for one and one for all!

In these lines from Book XII of Lattimore's translation of Homer's Iliad the assonance helps reinforce the lulling effect of the winds' sleep:

In this line from chapter 9 of Moby-Dick, the "s" and "h" sounds mirror the activity of the scene—singing—by making the prose musical.

Nearly all joined in singing this hymn, which swelled high about the howling of the storm ...

In Othello, just before he kills Desdemona in Act V, Othello utters this line that contains the repetition of diacope:

It's worth noting that Othello's line here is also an example of antanaclasis, as he is using "put out the light" to mean two different things.

In this excerpt from a speech by Ralph Nader, the repetition of "minimum wage" underscores its role as a major concern in both his speech and his political priorities.

In this example from Chapter 28 of the The Grapes of Wrath, Steinbeck's use of epistrophe in Tom Joad's farewell dialog with his mother emphasizes Joad's desire both to provide her with some reassurance and continue to be there for her:

Joad's repetition of his presence wherever poor people need help also emphasizes his dedication to the cause he believes in, and turns him into an almost mythological or godly presence who is always there to protect and support the downtrodden.

One of the most famous examples of epizeuxis occurs in Hamlet, as Hamlet is speaking to (and mocking) Polonious in Act 2. When Polonius asks Hamlet what he's reading, Hamlet responds:

Here Hamlet both mocks what he sees as the stupidity of Polonious's question, but at the same time the repetition communicates a kind of awful weariness, in which Hamlet can't bring himself to care about the meaning of the words.

Bob Dylan won the nobel prize for literature for the genius of his lyrics. His song "Masters of War" shows how polysyndeton can be used to build a specific emotion:

Anger and disgust are palpable in the final lines of this song of protest against the politicians behind the Vietnam War. By using polysyndeton, Dylan continues to add phrase after phrase, far beyond where listeners might expect him to stop, to fully communicate the depth of his fury and his hatred for the politicians he calls the "masters of war."

In Shakespeare's play Troilus and Cressida, the character Troilus uses polyptoton three times in two lines. In all three cases, the repetition emphasizes the might of the Greeks:

The Greeks are strong and skillful to their strength,
Fierce to their skill and to their fierceness valiant;

These are the first two stanzas of a song from Shakespeare's play, Twelfth Night. This poem actually contains a "double refrain," because it has two lines that repeat as refrains in each stanza.

When that I was and a little tiny boy,
With hey, ho, the wind and the rain,
A foolish thing was but a toy,
For the rain it raineth every day.

But when I came to man’s estate,
With hey, ho, the wind and the rain,
’Gainst knaves and thieves men shut their gate,
For the rain it raineth every day.

Why Do Writers Use Repetition? 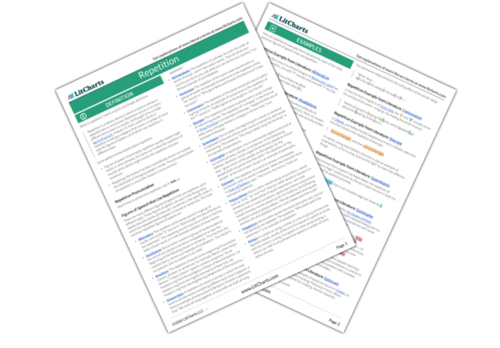